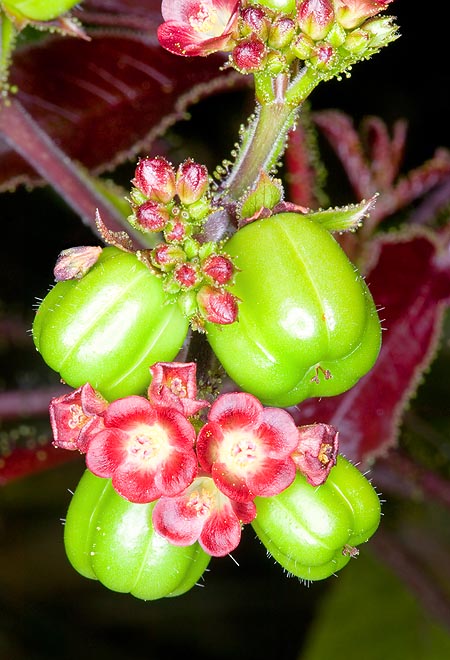 The Jatropha gossypiifolia L. (1753) is a perennial shrub with short life, evergreen, that acts as deciduous in the arid climates and outside from the tropical and subtropical zones, much ramified, tall up to about 3 m, but which usually does not exceed the 1,5 m.

The smooth and green bark tends to flake in thin grey layers; the lymph is of a pink orange to brownish colour.

The new leaves have a showy, intense, purple red colour. The inflorescences are cymes carrying unisexual bright red flowers, of about 1 cm of diameter, the female ones are isolated at the apex of the main axes, the male ones are placed laterally, the flowering is practically continuous, but intensifies between late summer and early autumn. The fruit is a dehiscent capsule (which opens spontaneously when ripe), with three lobes of about 1 cm of diameter and a length of 1,3 cm, of green colour tending to the brown when ripe, usually containing three 7-8 mm long, brown, ellipsoidal seeds.

It reproduces by seed which germinates in a few days; the species self-disseminates quite easily, so much to be considered as a dangerous pest, especially in the tropical zones. Of great ornamental value, due to its glossy foliage, initially dark violet, then intense green, it is cultivable in full sun in the tropical, subtropical and marginally in the warm-temperate zones; brief drops in temperature around -3 °C cause damage to the aerial part; it may resist to long drought periods. 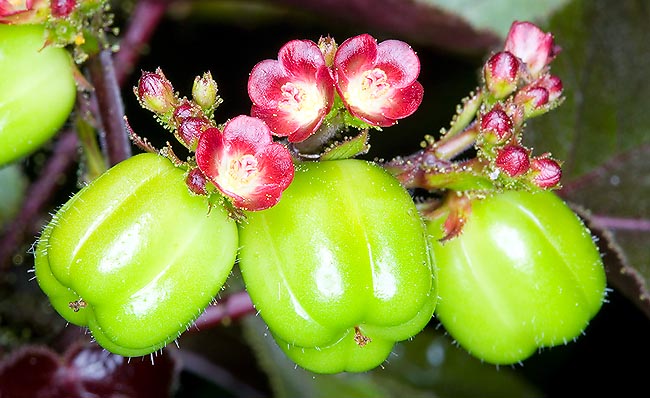 Ornamental, a pest in the Tropics, Jatropha gossypiifolia is toxic with medicinal properties © Giuseppe Mazza

It grows up in whatever sort of soil, even sandy and stony, and tends to become a pest in perturbed soils. It may be cultivated in pot in a sandy loam with a very good drainage, in full sun or, anyway, at the maximum possible luminosity and watering when the upper layer of the loam is dry. All the parts of the plant are considered as toxic, in particular the seeds as these contain the 40% in weight of oil; the major effects, in the most serious instances, are dehydration and cardiovascular failure, as consequence of hemorrhagic gastroenteritis. It has also dismal effects on the central nervous system.

The quantity of ingested seeds which may give toxic effects strongly depends on the personal response, from very few seeds to some tens, the children, of course, are the most exposed with the possibility of toxic effects also after the ingestion of one seed only, with abdominal pains and bloody diarrhoea. The oil extracted from the seeds is a powerful emetic and cathartic and in spite of its irritant properties for the skin, it is utilized in several dermatitis, whilst the lymph is used for healing wounds due to its haemostatic properties; also the leaves and the bark do have purgative properties.

Various studies have been done, with promising results, about the anti-cancer properties and in other fields of the medicine of several substances extracted from the plant. Finally, the oil; which was once utilized in the lamps, might have an interesting utilization as bio-fuel.