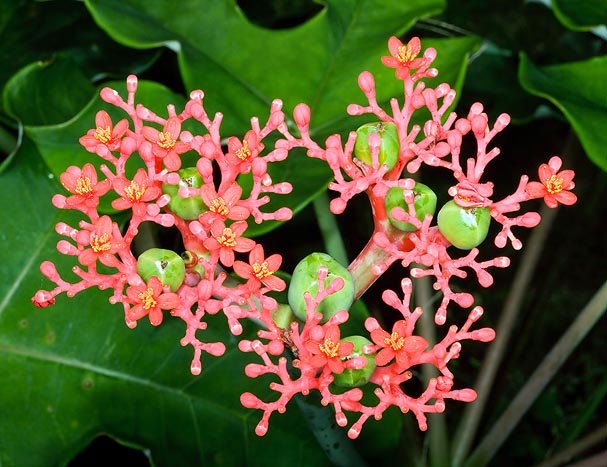 The plant is native to Honduras, Guatemala and Nicaragua where it lives in usually poor soils in areas with a marked seasonality and limited rainfall.

The Jatropha podagrica Hook. (1848) is a deciduous, little ramified, shrub, tall up to about 1,5 m, with rather succulent stem remarkably enlarged at the base, of greyish colour, with just visible scars of the foliar bases, scars which are much more evident on the youngest part of the branches and with fimbriate glandular stipules, on which side of them, persisting for some time after the fall of the leaves. The dark green leaves, in reduced number and united at the apices of the branches on a long petiole, are showy, with a diameter of 15-20 cm and even more, cordate-peltate with 2-5 ovate lobes with entire margin.

The inflorescences are terminal cymes, on a long peduncle, carrying a crowd of small, unisexual, flowers of orange red colour, the female ones, in reduced number, at the axilla of the main bracts of the peduncle. The fruits are trilobed globular capsules, dehiscent (which open spontaneously when ripe), 13-18 mm long of pale green colour, tending to the dark brown when ripe, containing about 12 mm long brownish seeds. 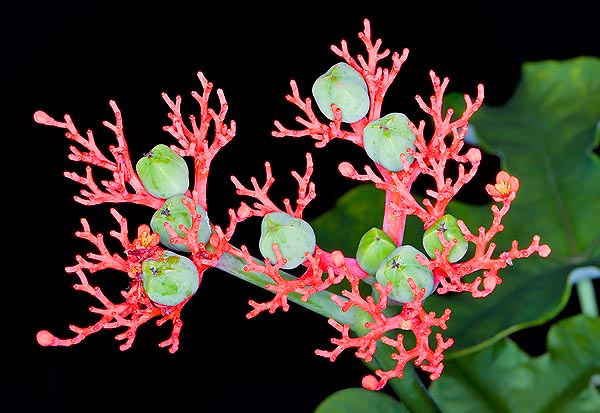 Once the flowers have fallen, the peduncles evoke sea landscapes with coral branches © Giuseppe Mazza

It easily reproduces in spring by seed which germinates in about one month at a temperature of 24-28 °C; for harvesting the seeds, which are thrown far away at the moment of the opening of the capsule, it is better to wrap the inflorescence, when the fruits are ripe, with gauze; it reproduces also by cutting.

Much ornamental plant due to the particular conformation of the stem, may be cultivated in open air in the tropical and subtropical climate zones with marked seasonality and poor rainfall, on sandy soils and particularly draining, in full sun or, however, at the maximum possible luminosity; it does not stand, except for a very short period, temperatures just below the 0 °C.

Watering must be moderate during the vegetative period, allowing the soil to dry up before watering again, practically zero in winter, during the resting time; the excess of humidity causes lethal rottenness.

In pot, it’s a plant very much appreciated by the collectors of succulents and of caudiciforms, in winter, where the climate does not allow the cultivation in open air, it is to be placed in a very luminous space at a temperature not lower than 12 °C, respecting the resting vegetative period.

All parts of the plant are toxic, in particular the seeds, the ingestion of which may cause hemorrhagic gastroenteritis with dehydration and cardiovascular failure, its presence is therefore to be avoided, if it’s the case, in locations frequented by children and domestic animals; the latex may cause skin irritation in the sensitive individuals.