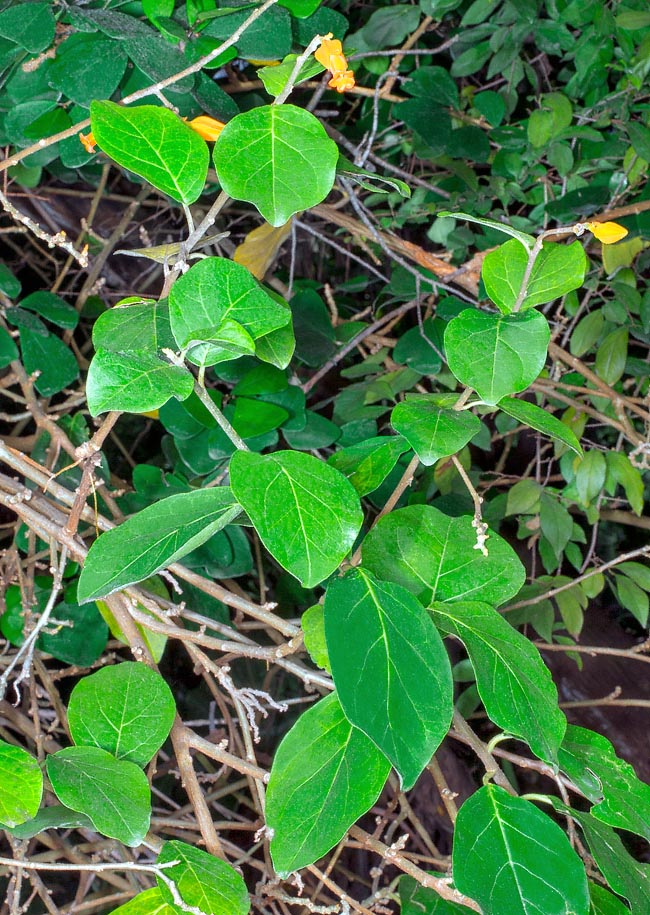 The species is native to Bolivia, Colombia, Costa Rica, Ecuador, El Salvador, Guatemala, Honduras, Mexico (Chiapas, Jalisco, Oaxaca, Tabasco and Veracruz), Nicaragua and Panama where it grows in the tropical forests, deciduous as well as evergreen, usually close to the water streams, from the sea level up to about 1700 m of altitude.

The genus is honoured to the Spanish scientists Jorge Juan y Santacilia (1713-73) and Antonio de Ulloa (1716-1795); the name of the species is the Latin adjective “mexicanus, a, um” = of Mexico, with reference to the place of origin of the type species.

The Juanulloa mexicana (Schltdl.) Miers (1849) is an evergreen sarmentose bush, deciduous in the less favourable climates, semi-epiphyte or terrestrial, 1-3 m tall, with stems having a greyish bark and young branches usually covered by a dense tomentum.

The leaves, on a 0,5-2 cm long tomentose petiole, are alternate, simple, sub-coriaceous, grouped at the apex of the branches, ovate to oblong-elliptic with obtuse or acute apex and entire or slightly sinuate margin, glabrous above, covered by a tomentum of stellate hairs yellowish below, 10-18 cm long and 4-10 cm broad.

Inflorescences, on a 1-2 cm long peduncle thickly covered by short yellowish hairs, pseudo-terminal or from the upper axils, semi-hanging, cymose, with flowers opening in succession.

Calyx, 2,7-3,2 cm long, formed by 5 oblong-lanceolate sepals with acute apex, merged at the base per 1/2-2/3 of the length, forming a sort of tube with pentagonal section keeled on the corners, fleshy, of yellow to bright orange colour, covered externally by a thin tomentum of stellate hairs, persisting unchanged for long time.

Tubulous, fleshy corolla, of yellow-orange to reddish orange colour, covered externally by thin tomentum, 3,8-5 cm long and of about 0,6 cm of diameter, with 5 ovate-triangular lobes with obtuse apex, 2-3 mm long, 5 stamens and filiform style inside the corolla. The fruit is an oblong yellow berry, of about 2 cm of diameter, containing numerous oblong seeds about 4 mm long.

It reproduces by seed, in organic loam draining and aerated, maintained humid at the temperature of 24-28 °C, and by semi-woody cutting in summer.

Shrub with characteristic and luminous blooming that lasts for good part of the year, cultivable in open air in the tropical, subtropical zones and marginally in the mildest temperate-warm ones, where temperatures just under the 0 °C are short lasting exceptions.

It requires full sun or slight shade and soils rich of organic substance, perfectly draining, acidic to neutral, maintained moderately humid; due to its tendentially rather disorderly posture, is to be periodically pruned by late winter-early spring. 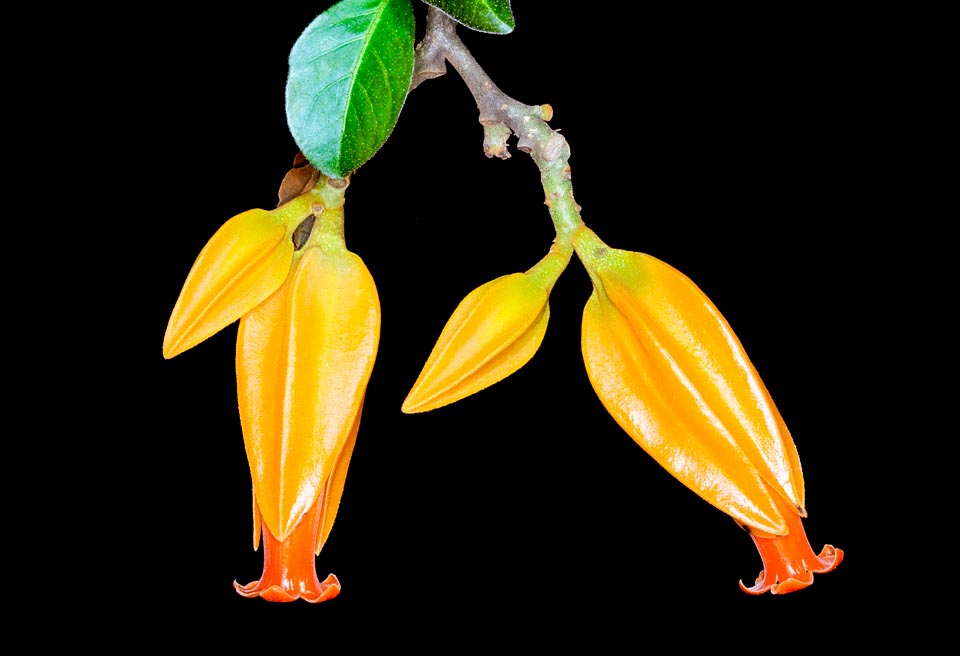 The luminous flowers open in succession with unusual and lasting bright yellow-orange pentagonal calyces and orange-reddish corollas. Born for the tropics, this species becomes deciduous in the less favourable climates as it does not bear in cultivation short thermal sags just under 0 °C. All parts of the plant are toxic © Giuseppe Mazza

Cultivable also in pot, in order to be sheltered in the coldest months in a very luminous environment with temperatures not under the 15 °C and 60-70% of humidity, utilizing a fertile, porous loam, with addition of coarse siliceous sand or agri-perlite per a 30%, caring particularly the drainage, being easily subject to rottenness due to water stagnations.

If the environmental humidity is not sufficient recourse may be done to nebulizations, utilizing non-calcareous water at local temperature, or creating a humid micro environment placing the pot in a wide saucer filled with expanded clay or rubble with a layer of water not in direct contact with the bottom. Regular watering during the vegetative period, but allowing the upper layer of the loam to dry up, before giving water again, spaced in winter, but without ever leaving it to dry up completely, both the excess and the lack of water cause the premature fall of the leaves.

All parts of the plant are toxic if ingested, it is therefore necessary to pay attention in presence of children and animals.