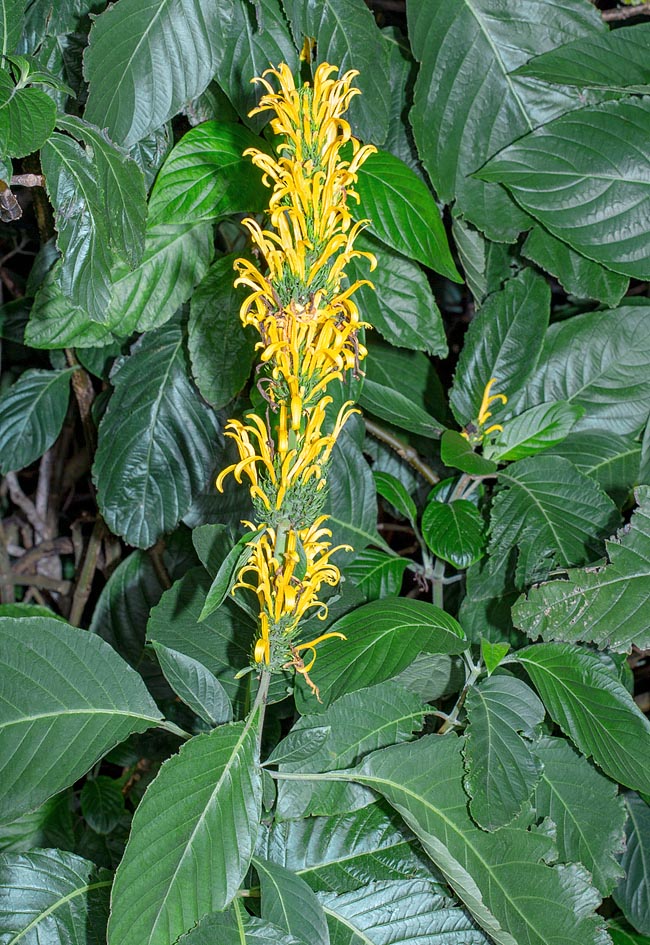 The species is native to Belize, Costa Rica, El Salvador, Guatemala, Honduras, Mexico (Chiapas, Colima, Jalisco, México, Michoacán, Nayarit, Oaxaca, Puebla, Querétaro, San Luis Potosí, Tabasco and Veracruz), Nicaragua and Panama where it grows in the humid forests from the sea level up to about 2000 m of altitude.

The genus is dedicated to the Scottish botanist James Justice (1698-1763); the specific name is the Latin adjective “aureus, a, um” = golden, made with gold, referring to the colour of its flowers.

The leaves, on a pubescent petiole grooved above, 1-5 cm long, are simple, opposite, ovate-lanceolate with acute to acuminate apex and entire or crenulate margin, 7-35 cm long and 5-18 cm broad, above of dark green colour and glossy, below pale green with the pinnate prominent veins.

The flowers are pollinated by hummingbirds. The fruit is an oblong capsule, 1,5-2 cm long, containing 4 seeds.

It reproduces by seed, put in organic draining loam maintained humid at the temperature of 24-28 °C, but usually and easily by cutting in spring.

Ornamental shrub of easy cultivation and fast growth with almost continuous luminous blooming, particularly abundant in autumn-winter (short-day species), utilizable as isolated specimen or for fences and borders, even mixed, in the gardens of the tropical, subtropical and warm temperate zones, where it can stand temperatures up to -5/-6 °C, for very short period, with loss of the aerial part, but re-vegetating from the base in spring if well mulched.

Requires preferably a slight shady to shady position, sheltered against the strong winds, and soils rich of organic substance, acidic to neutral, draining, maintained constantly humid, but without stagnations, even if well rooted can bear short periods of dry. 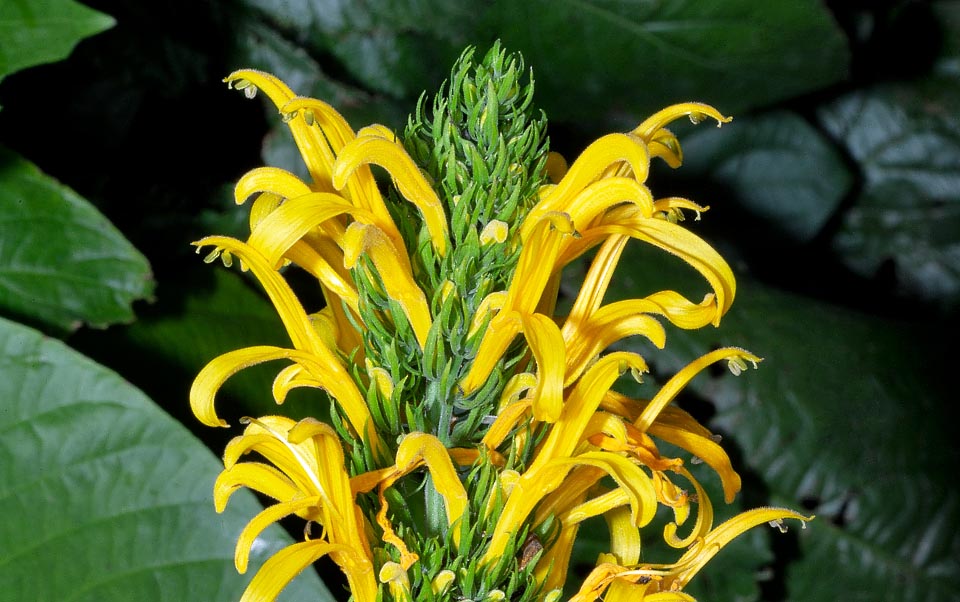 Its showy flowers, with bilabiate tubulous corollas, lemon yellow or bright yellow, are pollinated by the hummingbirds. Easy cultivation and almost continuous blooming, particularly abundant in autumn-winter. Born for the tropics, adapts even to gardens with warm temperate climate, bearing the -5/-6 °C for very short time © G. Mazza

The withered inflorescences are to be eliminated, besides the aesthetic reasons, to stimulate the emission of new ones; periodical pruning, in late winter-early spring, even if drastic, useful for maintaining a compact appearance.

Cultivable also in pot, to be sheltered in winter in a protected environment in the less favourable climates, utilizing a loam rich of organic substance with addition of coarse siliceous sand or agri-perlite per a 30% to improve the drainage, with lowest night temperatures not under the 15 °C. The watering must be regular and abundant in summer, more spaced in winter, leaving the superficial layer of the loam to partially dry up before watering again, and the fertilizations, in spring-summer, done preferably with slow release balanced products with addition of micro-elements.