The plant is native to central-southern Madagascar, where it grows at about 1.000 m of altitude in semi-desert areas.

The name of the genus is of uncertain origin, as it has not been specified by the author, Michel Adanson (1727-1806), after some, it comes from the Chinese name of one plant belonging to the genus; the species is honoured to the Russian botanist Boris Alexeevich Fedtschenko (1872-1947), who was director of the Saint Petersburg Botanical Garden.

The Kalanchoe fedtschenkoi Raym. Hamet & H. Perrier (1915) is a ramified perennial herbaceous plant with the non flowering stems more or less prostrate, succulent, perennial opposite leaves, obovate, 3-5 cm long and 1-3 cm broad, waxy, of bluish colour and reddish brown indented margins; by the time of blossoming the branch curves upwards rising up to about 40 cm. 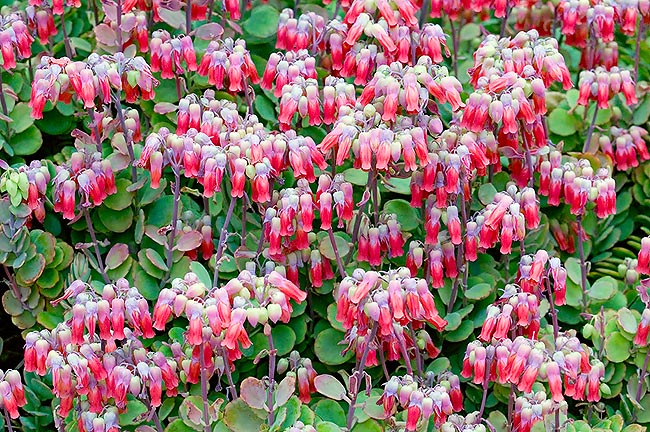 The flowering branch withers once the fructification is completed, but produces at the base one or two lateral prostrate sterile branches, 8-40 cm long, and rooting in the soil, also through the emission of robust and rigid aerial roots, which at the end will produce in their turn a flowering branch; in this way, with the time, the plant may remarkably expand. The fruits are follicles containing numerous tiny seeds. It reproduces by seed, cutting, easily also by leaf, division or by means of the plantlets which at times grow up at the base of the petiole. The plant can be cultivated in open air only in the zones with tropical, subtropical and, marginally, warm temperate climate; it is, in fact, rather sensitive to the cold, as it can resist, and only for a very short time, to temperatures as low as -3 °C.

It is to be placed in full sun, or, at most, in slight shade, on perfectly draining soils, possibly acidic or neutral, where it can resist also to long drought periods; it is suitable, due to the particular colour of the leaves, and even more due to the showy flowering, as soil cover in desert gardens in association with other succulents. It is often cultivated in pot by the lovers of succulents, at the maximum possible luminosity, and with temperatures which must not be less than 10 °C, utilizing substrata formed by soil and coarse sand, or agri-perlite, in equal parts; very diffused and appreciated is the variety ‘Marginata’ which has margins with cream coloured variegations.

The plant is subject to attacks of aphids and scale insects, and for this reason is to be periodically controlled in order to effect a quick intervention if necessary. Finally, it is reported as toxic for ingestion, in particular for small animals, due to the presence of cardio-active glucosides.

Kalanchoe fedtschenkoi was last modified: May 8th, 2018 by Giuseppe Mazza