The plant is native to the granite massif of Andringitra in central-southern Madagascar, where it grows on rocky arid slopes up to 2.000 m of altitude.

The name of the genus is of uncertain origin, as it has not been specified by the author, Michel Adanson (1727-1806), after others, it comes from the Chinese name of one of the species belonging to the genus; the species is honoured to the French botanist Louis Alexandre Mangin (1852-1937).

The Kalanchoe manginii Raym. Hamet & H. Perrier (1912) is a perennial, caespitose succulent tall up to about 40 cm, with several erect or creeping semi-woody stems covered by glandular hairs, but the flowering branches which do not have them. It has fleshy persistent, almost sessile (without petiole), leaves, at times covered by a thin down, of a rather variable shape, orbicular, oblong, obovate or spatulate, 1-3 cm long, 0,5-1,5 cm broad and up to 8 mm thick, with an entire margin or slightly indented at the apex. 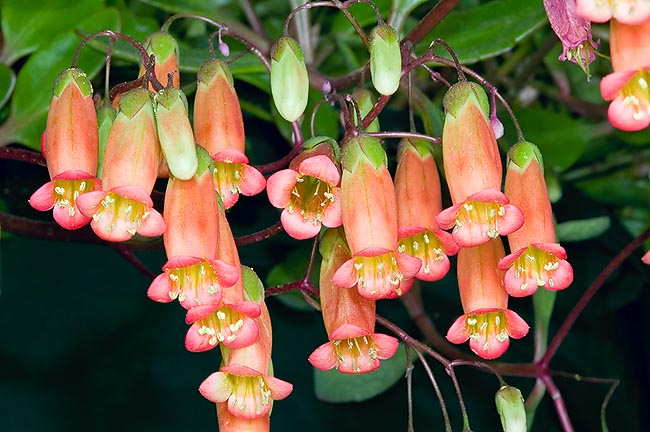 Ideal for suspended pots, the Kalanchoe manginii loves the sun and has a long blossoming © Giuseppe Mazza

The fruits are follicles containing several oblong seeds of about 1 mm. It reproduces by seed, in autumn or spring, to be placed on the surface, being the germination stimulated by the light (positive photosensitivity), utilizing a half-sandy loam; the seeds germinate in 7-30 days, or more, at 20-22 °C. It easily reproduces also by semi-woody cutting, left to well dry up, and by leaf cutting, in spring-summer, on a substratum formed by mould and sand, or agri perlite, in equal parts, at the temperature of 18-22 °C. At times, on the floral scape, after the withering of flowers, appear plantlets which may be utilized for the reproduction. The plant, with its long lasting showy blossoming, three months and more, is one of the most ornamental among the Kalanchoe; in particular, due to its prostrate behaviour and the drooping flowers, is ideal for suspended pots and as such is amply cultivated.

It requires a position in full sun or slight shade and sandy substrata, possibly acidic or neutral, with possible addiction of crushed stones for improving the drainage. Even if it appears resistant to some degrees under the 0 °C, it is advisable, seen the period of blossoming, not to expose it to temperatures lower than 6-8 °C. The watering must be regular in summer, but allowing the soil to dry up before giving water again; rare in winter.

Kalanchoe manginii was last modified: May 8th, 2018 by Giuseppe Mazza