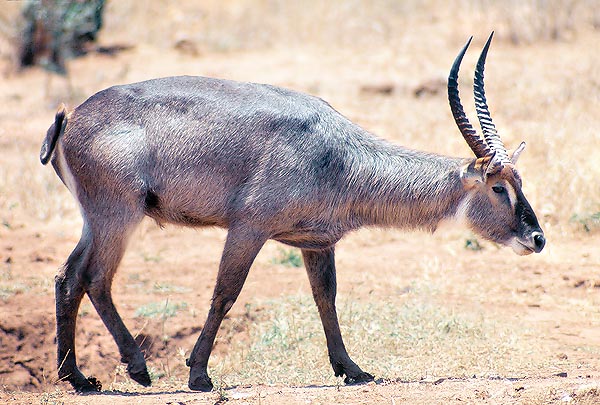 The Kobus ellipsiprymnus has shaggy and oily hair. The meat has unpleasant taste for man © G. Mazza

The Ellipsen waterbuck or Balanca (Kobus ellipsiprymnus Ogilby, 1833, family Bovidae order Artiodactyla) is a big African antelope, with a particular build: the body is long and solid, almost cylindrical, and the neck too is very long and robust, so that when I look at an adult specimen from the side, if it keeps the neck stretched forward horizontally, it reminds (will you pardon me?) a bottle of Coca Cola.

The legs are rather short and robust, the tail is thin and of average length. The head is fairly long, with big and much mobile ears and the male has horns provided with evident ringing (knots), massive and slightly curved with front concavity and, if seen from the front, with the shape of two parentheses. The average length varies from 55 to 75 cm, but some individuals may reach quite major measures.

The body is covered by a shaggy and hard hair, at times dark grey or “grizzled”, tending to darken with the age. The lower par of the legs is almost black, with a pale ring over the hoof, whilst the belly is paler. The zone of the throat, the upper lip and a ring around the nose are pale and on the snout, often darker than the remainder of the body, stand out two pale striae which move forward from the eye.

The neck has a sort of mane and a “ruff”, more evident in the males, but the most peculiar characteristic which renders this antelope impossible to be mistaken even to a neophyte’s eyes is the white drawing, elliptic, on the rump. This ellipse, which gives the name to the species, contours on the top the root of the tail and then gets down on the sides, for joining up, finally, with the white of the ventral region. The fore part of the ear is pale grey and there is a visible fringe of hairs that adorns the outline, the apex is black, whilst the dorsal part (or back) has a brown or reddish colour.

The scent glands of this species are not placed in the usual places (muzzle, legs, etc.) but they are scattered on the skin of the body and secrete an oily substance which gives the hair an oily appearance, from which the name, once used, of oily cobo. 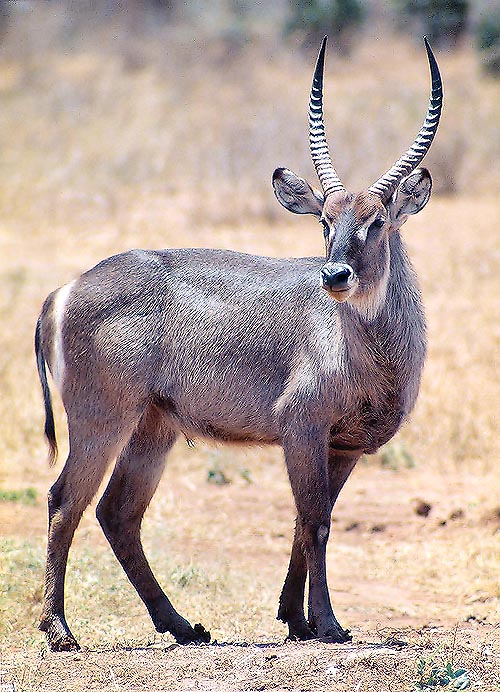 The ellipse drawing on the rump is characteristic © Giuseppe Mazza

The Kobus ellipsiprymnus is present east of the Rift Valley, whilst a much similar species, the Kobus defassa, has an ampler diffusion area and placed west of the above, even if, in some areas, there is an overlapping of the two species.

North, the presence of the species stops south of the Horn of Africa (zone essentially arid and consequently unpleasant for this animal), then, going southward, we meet it in Tanzania, Zambia, Zimbabwe, Mozambique, Malawi and in the Limpopo Valley. Furthermore, the balanca is present in many private and public reserves of South Africa, including mountain zones like the Soutpansberg and the Waterberg.

It is interesting to note that the species may cross with the Defassa cobo, phenomenon which takes place in some areas where both species are present and the ranges overlap.

Among all antelopes, these two cobos are those most independent from the water and the most subject to dehydration when the liquid element is lacking, they suffer from the excessive heat and need zones with thick vegetation and shade.

Being grazers, which mainly eat grasses, often dry from the soil, they need much water and do not get away for more than some kilometre from the water. However, in many zones, as well as in our area, the go up in the mountains and on the highlands, and then get down regularly for drinking in the pools of water or in some water stream.

The combined necessity of water and luxuriant vegetation makes as preferred zones the valleys and the drainage lines, but often also cultivations and plantations, where the irrigation guarantees watering points, are welcome. In one instance, while I was passing, during the night, through a small town of the Limpopo, I saw a waterbuck grazing pleasantly the lawn of a private small garden, which was kept humid and green by the sprinklers.

Having sedentary habits, the ellipse cobo is rather territorial and it is not rare to see small groups of females and young individuals, whilst the males may or may not be territorial. In reality, the females are more often organized in groups of only two or three, however, small groups with overlapping territories often converge in associations of 8-12 individuals, groups which, in any case, are not true herds, but simple and occasional “groups”, extremely unstable and fluctuating. The combination of some factors, like the relative scarcity of optimal areas, the territoriality, the sedentariness, often causes phenomena of overcrowding and especially of overexploitation of the resources, with consequent depletion of the environment; from this the necessity, in many private reserves, to reduce, with selective felling, the present population, otherwise there will be the irreparable deterioration of the habitat and the survival of the waterbucks population itself.

The mature males are territorial, and get more solitary with the age, whilst there may be small groups of bachelors, groups which however, will soon dissolve. A territorial mature male will tend to chase a mature competitor (or to be chased), but often tolerates, without too many problems the presence of small groups of young bachelors. 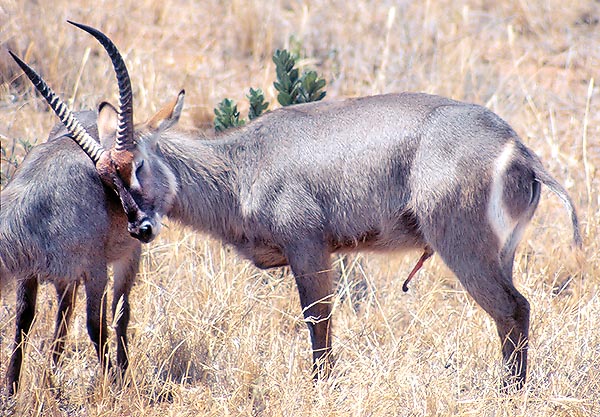 Not all the males are, however, so much tolerant and so others chase quickly and stubbornly any male entering their territory, regardless the class of age.

Reproduction: both males and females mature sexually rather late (5 or 6 years for the males and at least three for the females). The ellipse cobo which lives in tropical zones tends to reproduce during the rainy season, whilst the defassa, in the equatorial zones, does not have seasonality, but the males remain territorial for the whole year, even out from the reproductive period.

When close to the delivery, the female gets into the thick at least a couple of days before the time and, odd enough, it seems that most of the births take place in the morning. The non-primiparous females love to deliver the following cubs in the same “nursery” where their first was born; this is, practically, a form of exasperation of the sedentariness and the territoriality of the species.

The newborn results, oddly, less defenceless than aggressive species like the black antelope as already thirty minutes after the birth is capable to stand on its legs, and after a few hours it may run far faster than a man, and for this reason, instead of immobilizing in the grass when a predator approaches, it prefers, already at once, to run away. In the other hand, in zones where the spotted hyena is present, they have noted that this last is the most dangerous predator for the young, just for the fact that they, instead of remaining immobile in the shelter, tend to go around for long time. The meat of the waterbuck has the reputation of being inedible and with a taste of musk, whilst, when prepared in such a way to eliminate these parts, the meat is absolutely edible, even if, by sure, less good than that of other antelopes. This has fed the rumour that many predators do not hunt it. For what is my experience, it does not seem to me that a lion has problems of this sort, and in fact in many zones the cobos pay a heavy tribute to the lion. Often, the males, instead of running away, tend to face, with low horns, the feline and this by sure does not reveal to be a good technique, seen the almost foregone conclusion of the fight. In one instance, I found a killed female and partially eaten by a big leopard.