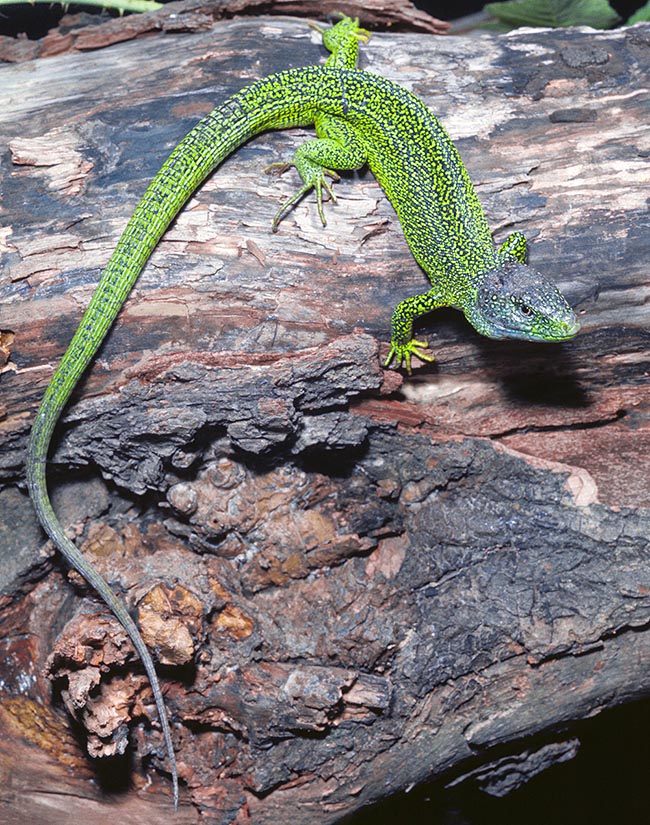 With 30-40 cm of length, the Lacerta bilineata is one of the most characteristic and beautiful lizards of Europe © Giuseppe Mazza

The Western green lizard (Lacerta bilineata Daudin, 1802) is one of the most recognizable, characteristic and beautiful lizards of Europe.

The name of the genus Lacerta means lizard in Latin, whilst the specific name bilineata refers to the two clear dorsal lines present in females and young individuals.

Lacerta bilineata is a typically central-western European species. It is found in the northern Iberian Peninsula, France, western Germany, Switzerland, Italy (excepting Sardinia and some minor islands) and Jersey Island.

The Western green lizard is a shy, diurnal and heliophilous species, which means that it likes staying in the sun, and is rather thermophilic, that means loving the heat.

Always alert and attentive, when it feels a danger it runs rapidly in the safe of a crack of a rock or in its den, where it spends the winter months, stolen often to a small rodent.

If grabbed by the tail it may, as usually occurs in the lizards’ world, abandon the same to the predator as in any case it grows again; a phenomenon zoologically known as autotomy.

About the diffused popular belief that when it bites a finger it will not release the seizure, this is simply because, being in midair, it does not know where to run away. It is in fact sufficient to put the hand on the ground, so that the legs touch the soil, to see it opening wide the mouth and running away hastily.

It is present at medium-low altitudes, but in the southern part of its range of distribution can be present up to about 2000 m.

It is a decent climber, but usually prefers to live on the ground. It prefers the transition zones between different habitats, scientifically called “ecotones”, the humid sites close to the den and the areas rich of shrubs and of bushes that offer favorable sites for the thermoregulation. It can be encountered therefore at the margin of the woods, in clearings rich of tall grass, between brambles and low vegetation, on piles of stones, cultivated fields and pastures. 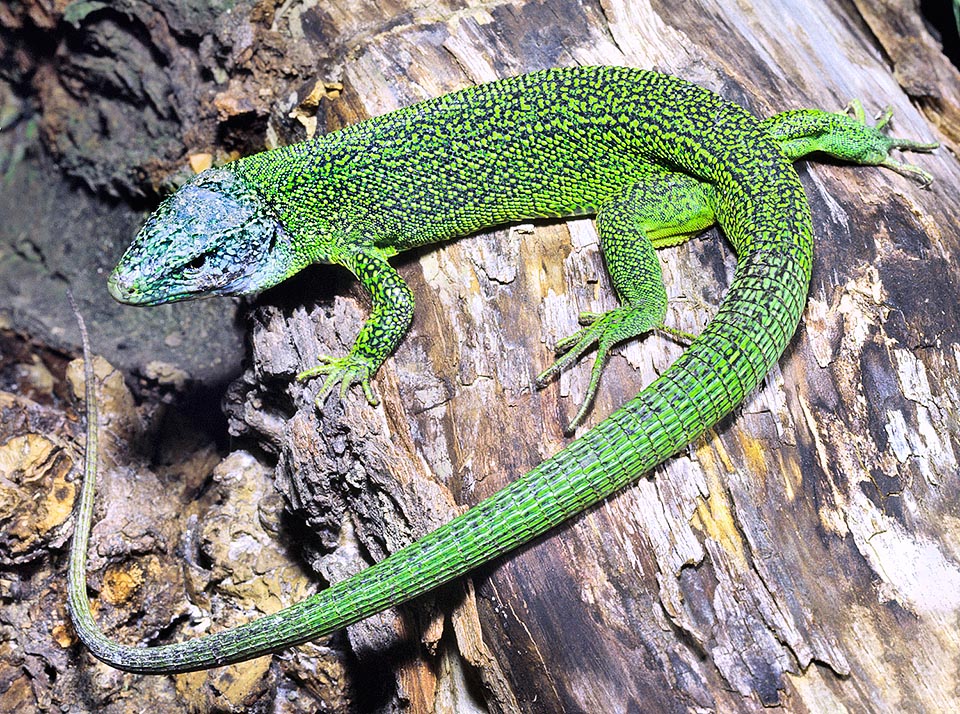 The males, very territorial, have the sides of the head and throat bright light blue, especially during mating season, and the body is emerald green with thick black speckles © Giuseppe Mazza

The Lacerta bilineata belongs to the group of the so-called “green lizards” and is of medium-large dimensions, reaching the 30-40 cm with a weight of about 35 g. The body is massive but slender, the limbs are well developed and the tail, very long, often measures, itself alone, two thirds of the body.

The head is robust, bigger in the males than in the females, the collar is toothed, the dorsal scales are keeled and the belly has overlapping scales with angular sides mainly arranged in 6 rows.

Furthermore, usually, are absent superciliary granules and the temporal scales are less than 20; the rostral shield does not reach the nostrils and there are 2 post-nasal scales. 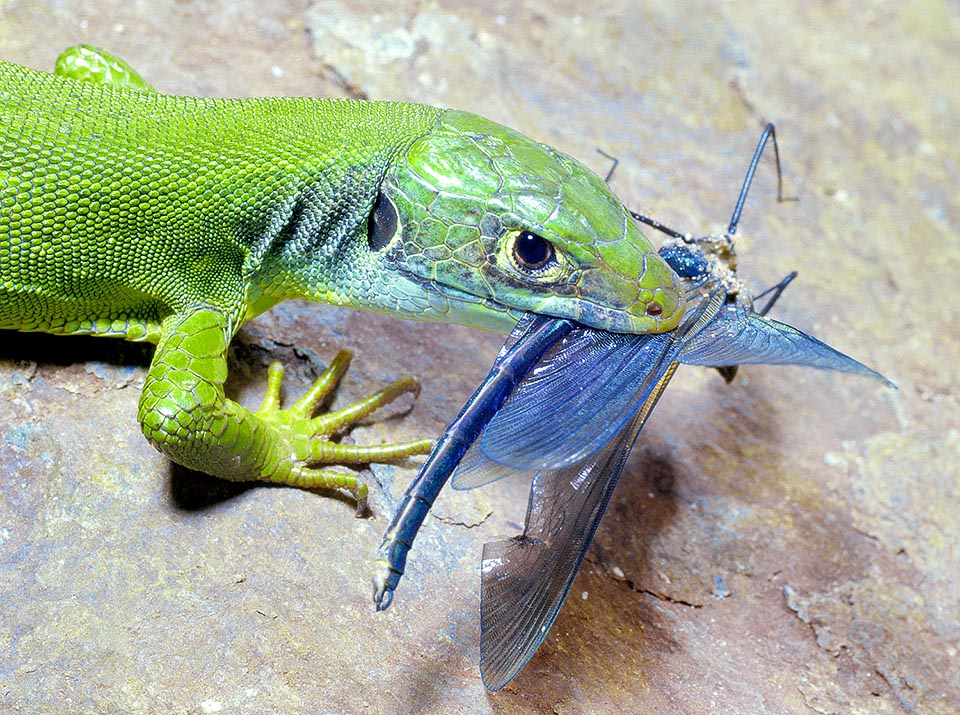 The males distinguish from the females also for the presence of showy femoral pores on the ventral part of the rear limbs. The sides of the mouth and the throat are of a bright light blue, very intense during the reproductive period, and the body has a nice emerald green color with thick black speckles.

The females, smaller, have a green or brownish more uniform livery, often with black spots on the back and 2-4 longitudinal pale lines edged of dark; especially in the period following the fecundation, also their head may display light blue, but paler, hues.

The young, with body proportions slightly different, display a pale green-brown livery and two or four clear lines on the sides. All have whitish or yellowish belly. 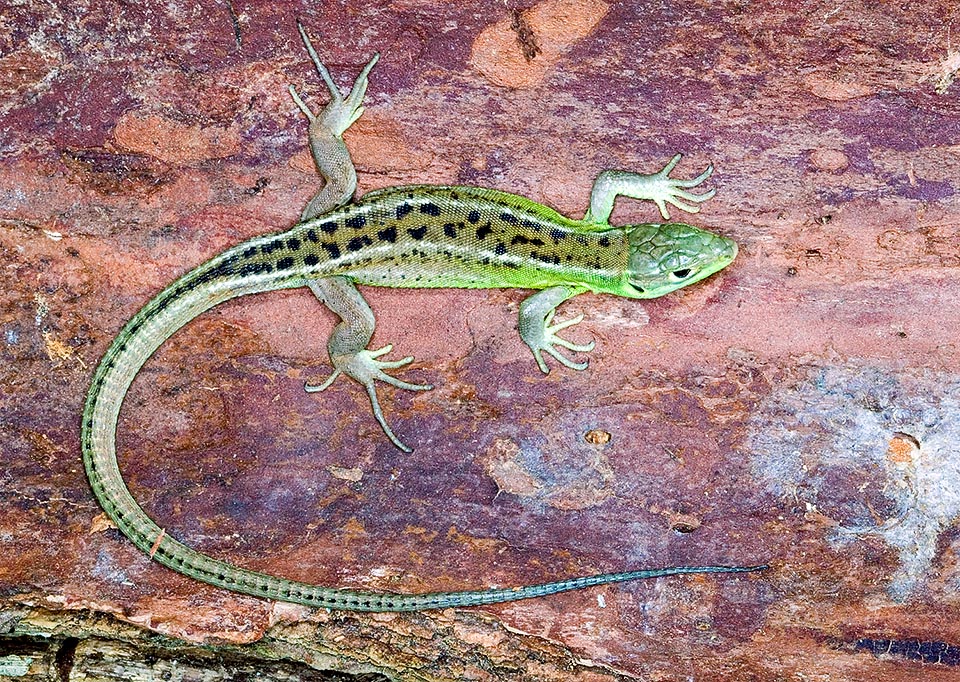 A female. We note very well on the back the two clear longitudinal lines that stand at the base of the scientific name “bilineata” of this species © Giuseppe Mazza

Finished the period of winter quiescence, the Lacerta bilineata is active from March to October. During the cooler months, it is easy to see it in the central hours of the day, whilst in full summer, when it’s too much hot, it is usually moving in the early morning.

The diet includes invertebrates, like worms, spiders, isopods and various insects, but also sugary berries and small vertebrates. In fact, it preys young lizards, the little ones of the Blindworm (Anguis fragilis), newly born mice, eggs and nestlings of small birds.

In spring, the dominant males are particularly nervous and intolerant. They survey their territory showing at the maximum of their chromatic splendor. Characteristic are the exhibitions with the rear limbs raised and the light blue throat well visible while whipping the air with their tails, and if these signals are not sufficient for discouraging an adult male who dares to cross the border, they will engage in the duel for the territory and the females. 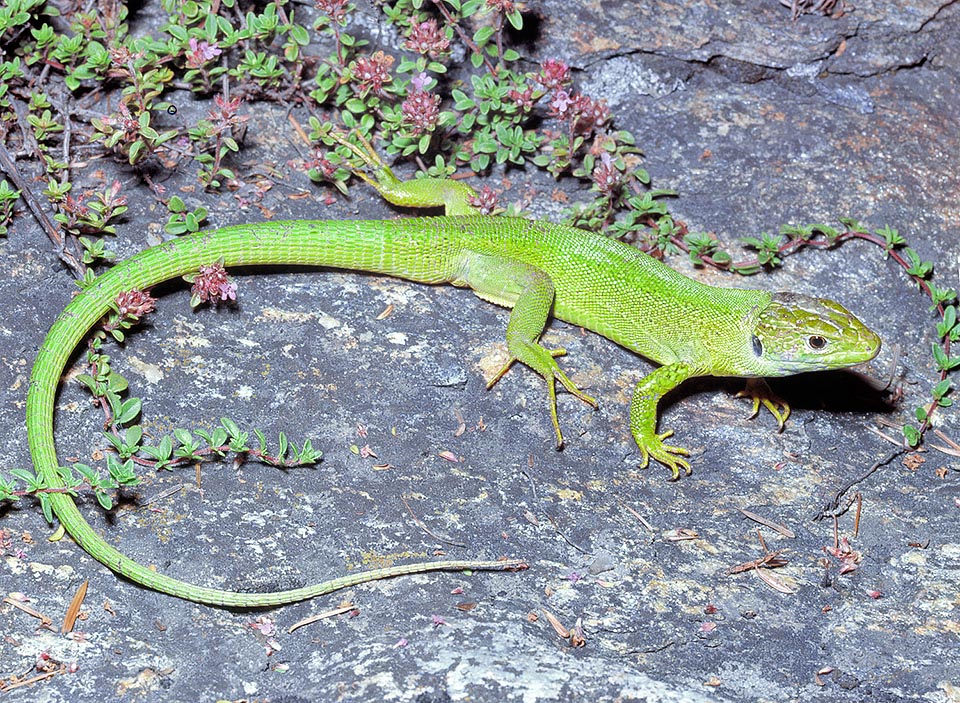 Sub adult male. We note already the femoral pores on ventral side of rear limbs but the body still has to grow stronger and are absent the light blue shades of the head and the throat. The Lacerta bilineata reaches sexual maturity around the 2 years and if not ended in the mouth of a snake, a raptor or other predators, may live 10-12 years © Giuseppe Mazza

Also the mating follow a precise ritual until when the male, catching the female on a side, immobilizes it to slip under the body and introduce into the cloaca its hemipenis.

In May-June, 3-6 weeks after the fecundation, the female lays 5 to 25 whitish eggs initially one centimeter long, that then swell with the rains till reaching a maximum of 18 mm, into a small well about ten centimeters deep dug in the sand and carefully closed or in a humid and warm location like a decaying log. They will hatch between August and October, after about 70-100 days of incubation. Upon the birth, the young measure 8-10 cm and have a life expectancy of 10-12 years.

The Lacerta bilineata is preyed by snakes, raptors, mustelids, hedgehogs and foxes, not to talk, close to the dwellings, of the domestic cat and of the hens that rummaging around, may encounter a little one.