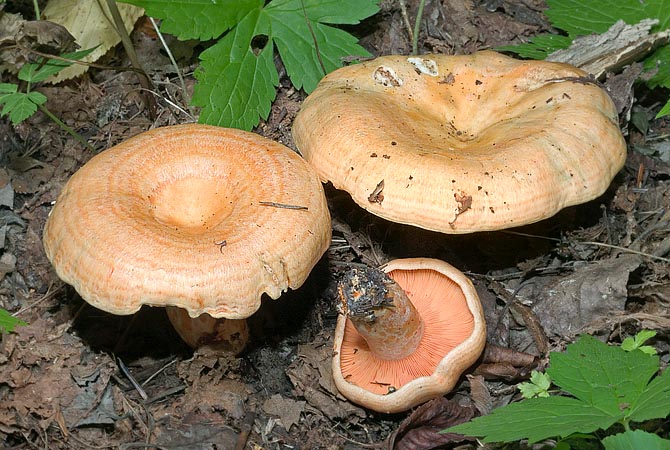 The term “salmonicolor” comes from the Latin and means with the colour of raw salmon flesh.

This species, like all the Lactarius with red milk, in some zones is quite sought after for culinary purposes and this has created several local or dialectal names. In Italy, it is known as “sanguinello”, “fungo del sangue”, and many others at local level; in France, it is known with the name “lactaire couleur de saumon”; for Spain: in Castilian, “níscalo de abetal”, in Catalan, “pinetell d’abet”, in Aragonese, “rebollón de abeto” , “rebichuelo de abete”; in UK, “milky agaric”; in Germany, “Lachs-Reizker”.

For the description of the Genus, Section and Subsection, please refer to the text Lactarius deliciosus.

Cap : 4 – 12 cm, initially convex, then flat and finally depressed, almost funnel-shaped in the ripe fungus, much fleshy, of irregular shape, at times lobate, gibbous; margin inrolled in the young fungus for long time, then extended, flexuous, regular or just wavy, not striated. The surface is smooth, glabrous, greasy when the weather is humid, otherwise bright, at times there are evident signs of zones; of salmon, orange-reddish, colour, with concentric humid spots. 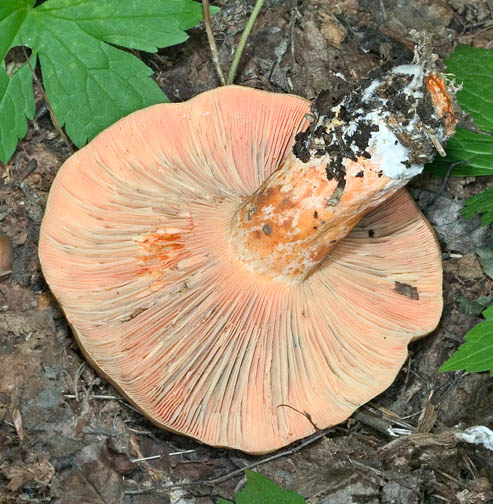 Hymenium : thick gills, adnate-decurrent, often forked when close to the stipe; intercalated with several lamellules; of pale orange or orange only colour, they stain at times of violet on the lesions, rarely greenish by the end.

Flesh : thick, firm, whitish, cream-pale orange without hues of green, turning after about one hour brown-reddish, it may be also immutable. Pleasant smell, mild flavour.

Latex : rather scarce, orange-reddish, immutable even is isolated, sourish taste.

Habitat: it grows in summer and in autumn, mainly under fir, also mixed to beech or spruce.

Remarks : it’s an easy to recognize species due to the habitat, it grows mainly under Abies alba, due to the yellow-orange latex, the salmon coloured cap, the slimy cuticle with humid weather, the zonation at the margin almost absent and the fact of not turning green.

Possible mistakes may be incurred with the Lactarius semisanguifluus Heim & Leclair 1950, which, however, grows under Pinus especially Pinus sylvestris, the cap of orange, pink orange, colour with vinous shades, yellowish orange at the disc, spontaneously turns green, dark green up to bluish green, the scarce latex, of intense orange colour, in short time, 8-10 minutes, turns vinous red, of slightly acrid and sourish taste. 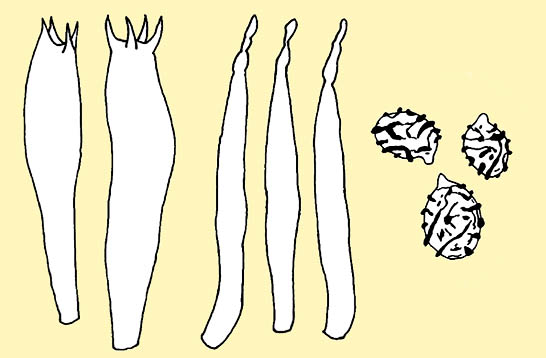 It can be also mistaken with the Lactarius deterrimus Gröger 1968, which, however, grows under Picea abies (spruce), the cap with more evident zonations, with well marked guttulae of different colour, of pale orange colour, yellowish orange, turns green prematurely, the latex not abundant, of carrot orange colour, which, after about half an hour turns reddish orange. It can be mistaken with Lactarius fennoscandicus Verbeken & Vesterholt 1998, which also grows under Picea abies, but in humid zones between moss and sphagnum, has dark-coloured cap, violaceous grey, lilac grey, greenish lilac, with very marked zonations on all the surface of the cap, greening, the latex is scarce, orange, turns first reddish orange then green, sour taste, somewhat unpleasant.