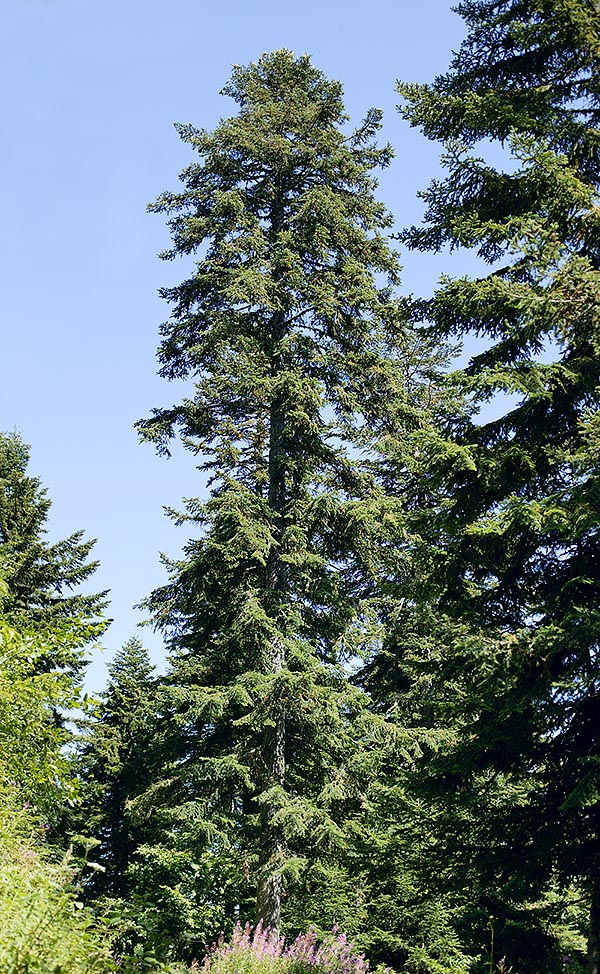 Abies alba, already present in our planet 55 million of years ago, can be 75 m tall © Giuseppe Mazza

The genus Abies includes, after various authors, (40) 48 to 55 species of evergreen conifers distributed in North and Central America, Europe, Asia and North Africa, mainly on the mountain areas.

The Silver fir (Abies alba – Mill.1768) was already diffused on our planet 55 million of years ago and still now this, considered as one of the most beautiful and imposing European conifers, spreads its range (South-European orophyte) from a main alpine-central European nucleus (Alps, Jura, Black Forest) radiating up to the Sudetes and the Carpathians, the Balkans, up to get in contact with the range of the Abies cephalonica, up to Aspromonte, Corsica, Auvergne and the Pyrenees.

The classical name of the genus used since the times of Virgil appears to derive from the Sanskrit root “abh”, to gush, due to the resin coming down along the bark of the trunks, other authors link it to the Latin “abire”: to leave, to go away, probably meant as getting away from the ground, seen the remarkable height reached by the trees belonging to this genus.

The name of the species “alba”, from the Latin “album”: white, refers to the grey-whitish bark and to the flattened, needle-like leaves which have two white longitudinal stripes below.

It is the most sought species for doing the Christmas tree, followed by the Norway spruce or Western spruce (Picea abies).

The silver fir is a tree of first magnitude reaching remarkable heights from 40 to 60 (75) metres and a diameter of 2-3 m and a good longevity (up to 400 years, exceptionally more than 600).

The trunk is straight, columnar, with smooth bark dotted by resinous vesicles, white-ashy when young, and then cracked in thin plates, turning grey-blackish with the age, secreting resin.

Leaves persistent for various years (as an average, 5-6 up to 10-12), linear, flexible, solitary, of 1,5-2,5 x 10-20 (30) mm, somewhat narrow at the base, obtuse at he apex, with flat section, grooved along the central nervation, of almost glossy dark green colour above, white below, with two longitudinal rows of stomata. 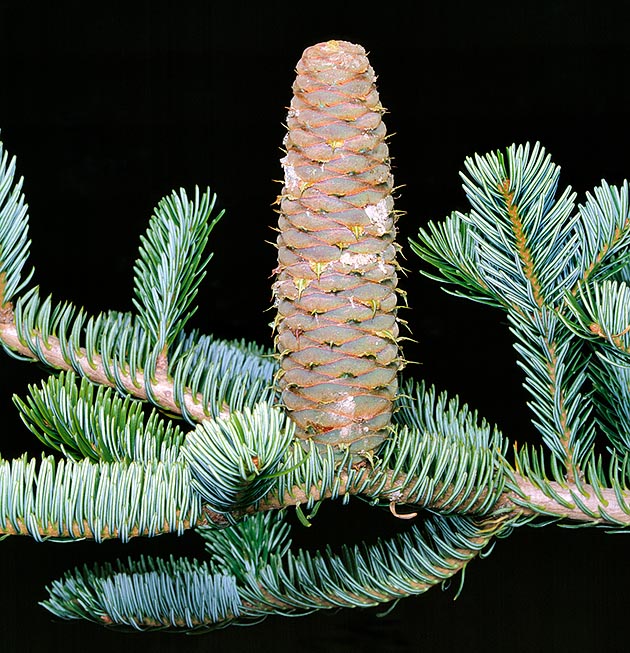 Any doubt if it’s a silver or a red fir? Simple: the silver fir (Abies alba) cones look upward whilst the red fir (Picea abies) ones are bent downward © Giuseppe Mazza

Small buds, isolated or in groups of three, luminous, not resinous.

Monoecious plant with numerous male yellow-greenish strobili with purplish scales, at the axil of the leaves on the lower surface of the one year old small branches; female cones ripening on the first year; mostly carried on the branches of the upper third of the cyme, erect, cylindrical to ovoid, 10-15 (18) cm long and three cm broad, initially green, then violaceous green and finally turning brown.

After the anemophilous fecundation happening in April-May, the scales when ripe disarticulate and fall from the axis (persistent) freeing the seeds, 6-9 mm long, yellowish-white, with the wings twice long, that are dispersed by the wind.

Every 3-5 years, during the so-called “mast years”, the production of pollen is very conspicuous; so much that they talk of “sulphur rain”.

For the multiplication are to be collected the cones (or pinecones) in September-October that are to be exposed to the sun up to ripening and freeing of the seed (6-10 kg. of seed per 100 kg of cones).

The silver fir grows in the woods of the mountain regions in the belt of the beech (400-1800 m of altitude); when it is dominant “has its own striking beauty: the very high trunks, at times reaching enormous size, rise like columns of a Gothic cathedral, pervaded by a penumbra which seems to induce the contemplation and meditation. Any forest landscape was more suitable to act as a frame to the hermits’ shelters, the cells of the monks and the great and much celebrated medieval monasteries, almost as a continuation of the oldest tradition of the sacred woods of the classical antiquity” (Valerio Giacomini).

Along the Alpine chain it lives in the mountain zone between the 800 and the 1500 m of altitude whilst along the Apennines it goes down up to the margins of the holly oaks woods (100-200 m). The young small plants are schiaphilous on the Alps and heliophilous on the Apennines. 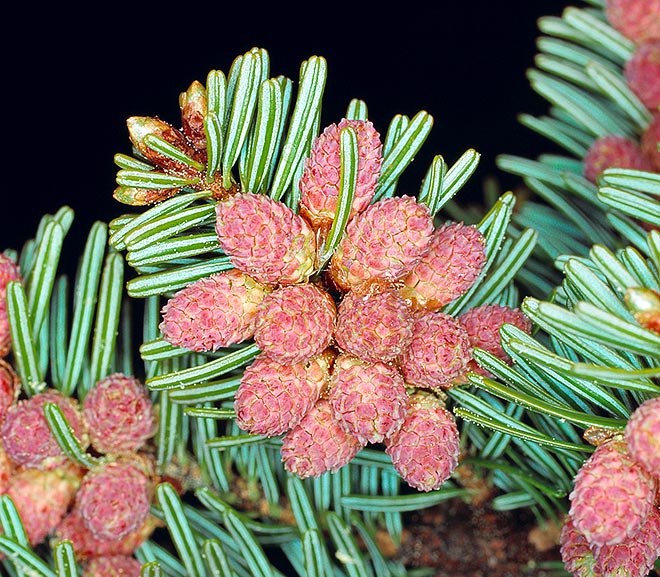 Moreover, but we must observe a branch close, the leaves have on the lower page two longitudinal white lines. In April-May the male strobili, here shown, free showy clouds of pollen © Giuseppe Mazza

An endemic species close to the silver fir is present in Sicily: the Sicilian fir (Abies nebrodensis), which had risked the extinction on the Madonie mountains and, thanks to the intervention of the botanists and of the forester has been multiplied and reintroduced.

The wood of this fir, of opaque-white or yellowish colour, with well distinct rings and without apparent duramen, is almost without resin (present only in the bark), fine in texture and of straight grain, light and soft (density 440kg/mc), easy to work, fairly flexible but little resistant to the shocks and short lasting also because, having no resin, is easily attacked by the insects.

Mediocre for heating, is used in carpentry for current timber and packaging, from it are made matches and sticks for ice creams, in the paper industry, especially for newsprint paper.

Its straight and node-less trunks, quite elastic in relation to the basal density, were widely employed for masting the sailboats; the bark, rich of tannin as well as that of the Norway spruce (Picea abies), has been long time employed in the tanning industry but such use is nowadays no more convenient and has been abandoned.

Other species of the genus Abies, are often cultivated especially for ornament (Abies pinsapo, Abies cephalonica, Abies silicica, Abies grandis, Abies nordmanniana, Abies numidica, etc.), distinguishable for the characteristics of the leaves (acute or obtuse), for the gemmae (resinous or not), for the size of the cones, for the posture, etc.

During the juvenile stages the silver fir has a slow growth, tolerating for long time the shade and able to recover the development when light is present. 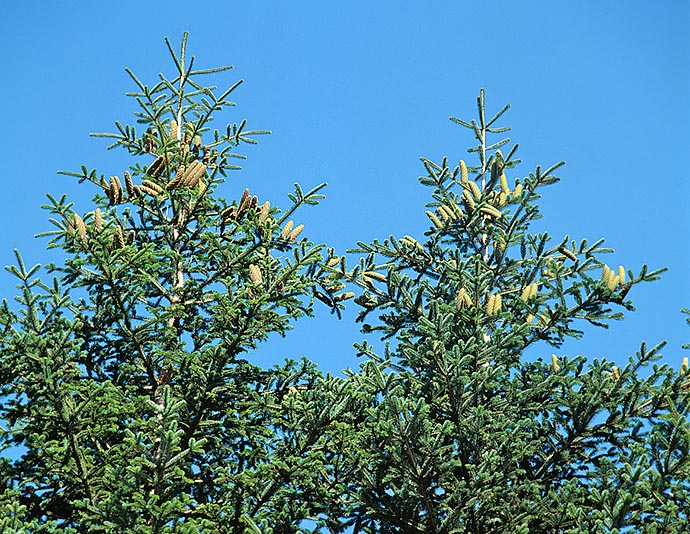 The female cones, 10-15 cm long, are initially green, then green-violet and finally brown. The wood, light and soft, is easy to work, but almost without resin and so easily attacked by the insects. Short lasting, mediocre as fuel, is now used for packaging, matches, sticks for ice-creams, and in paper industry © Giuseppe Mazza

It is a mesophilic and schiaphilous species loving the Mediterranean climate, relatively microtherm, wanting a constant atmospheric humidity and fearing the summer drought, therefore preferring the northern expositions.

It loves deep and fresh soils, avoids the compact ones or if having water stagnations and prefers those tendentially acidic, but in its range, grows well also in the carbonatic substrata.

The main pests found in the fir woods are due to the attacks of various fungi such as the Armillaria mellea (dred standing plants), Heterobasidion annosum subsp. abietinum (uprooted plants due to the root rottenness) and Melampsorella caryophyllacearum (stem cankers).

The young plants are very much sought and strongly damaged by the ungulates (deer, roes, goats) and this, along with the strong competition of the vigour of the beech, stands among the causes of the continuous decrease of the silver fir woods.

Often the stumps of the fallen silver firs form a scarry callus which remains alive for many years, sign of the radical connexions between the various individuals (bio-groups).

In the seventies, a high death rate of firs occurred in all the range of the species with yellowing of leaves and symptoms of precocious ageing, most likely due to a combination of causes (climatic changes, pollution, water stresses, etc.). This weakening, known in Germany already by the beginning of the last century under the name of Tannesbernen (literally, plague of the silver fir) causes with more facility the attack of insects or of parasitic fungi. 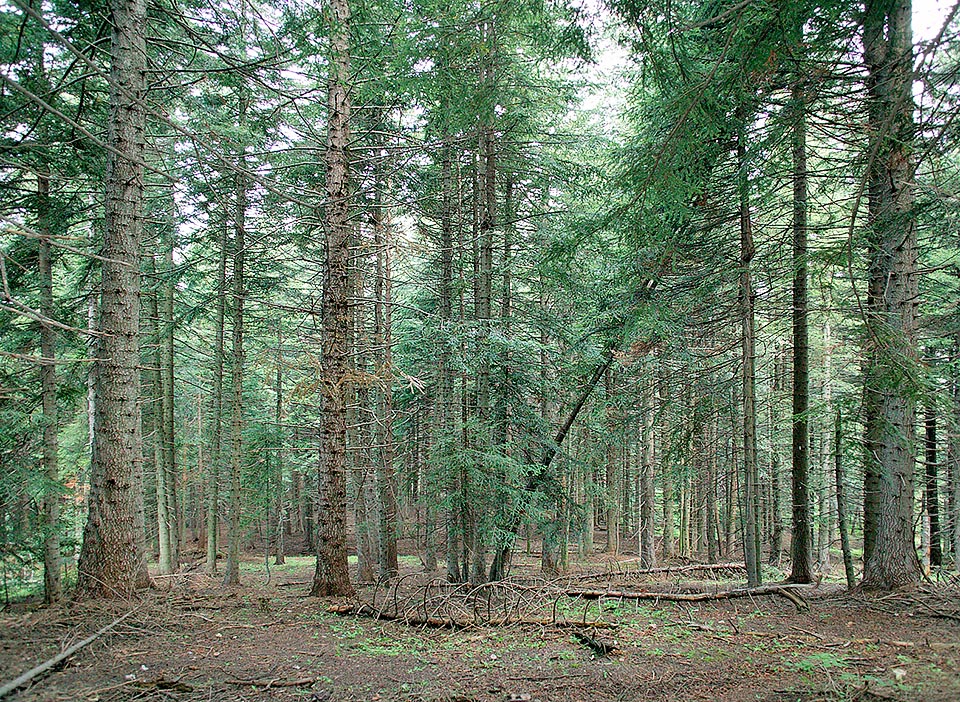 The woods of Abies alba allow littler light to filter and create important ecosystems. In eternal struggle with the red fir, the silver fir grows on the Alps between 800 and 1500 m of altitude, whilst in the Apennines chain goes down to 100-200 m, close to the holm oak woods. It loves deep and fresh soils, possibly acidic, without stagnations © Giuseppe Mazza

In the food chains of the woods of silver fir are present numerous species of animals, from the predating pine Marten (Martes martes) to birds such as the Black woodpecker (Dryocopus martius) greedy eater of the dangerous xylophages nourishing of wood, to the Boreal owl (Aegolius funereus) which hunts the Alpine shrew (Sorex alpinus). Among the foliage of the fir we see often the acrobatics of the Willow tit (Poecile montanus), of the Crested tit (Lophophanes cristatus) and of the Coal tit (Periparus ater), able and extremely useful insectivores, volunteers in the defence of the health of our friends, the trees.

Are also numerous the species of fungi creating symbiosis with the silver fir, such as the excellent Hygrophorus marzuolus known as “March mushroom” or “dormant”, Hygrophorus pudorinus, Russula ochroleuca, Lactarius salmonicolor, etc. 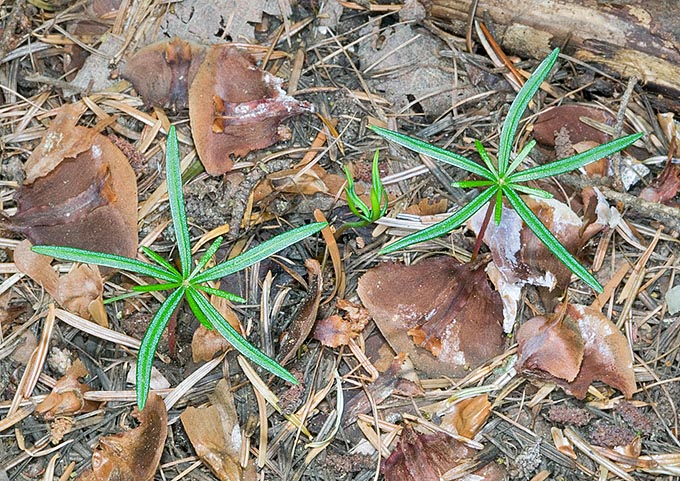 Germinating seeds. When young, the silver fir has slow growth and tolerates the shade for long time © Giuseppe Mazza

The resin of the silver fir forms the Strasbourg or Alsatian turpentine: a dense liquid, syrupy, transparent, with pleasant balsamic smell similar to that of the turpentine and of the cedar, useful in the respiratory diseases.

It contains an essential oil, abietic acid, terpenes and bitter substances giving it expectorant, sudorific, antrheumatic, diuretic, antispa- smodic and antiseptic properties. Also the buds are utilized, collected in spring, as they contain limonene, pinene, small quantities of resin, and the leaves (all the year round) with the essence, a glucoside and provitamin A. The small branches of adult plants as well as the wood and the whole extract are employed in the stimulant vegetable baths. During the warm summer nights, often the leaves, attacked by the aphids, cover of a sugary substance (honeydew) sought by the bees and thanks to this they produce an excellent dense, very dark, bitterish and balsamic honey.