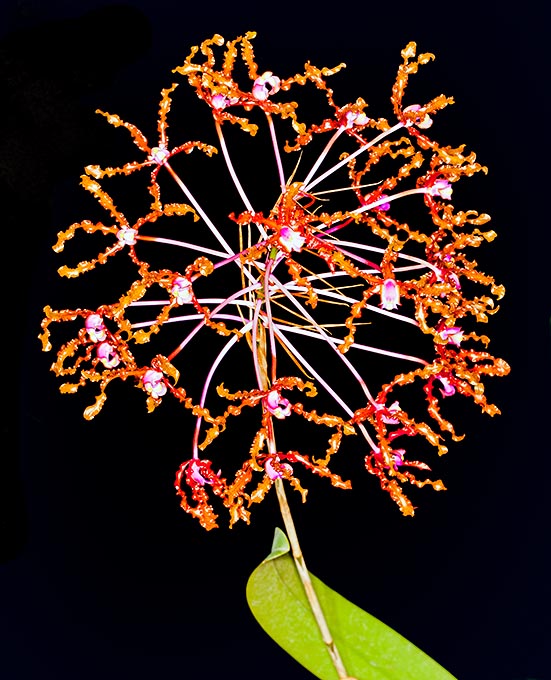 The species is native to Colombia, Costa Rica, Panama and Venezuela, where it grows, epiphytic, in the forests up to 800 m of altitude.

The origin of the name of the genus is uncertain, as it has not been specified by the author (Lindley), some think it’s the name of one of the Vestal virgins, Roman priestesses who had the task of guarding the sacred fire dedicated to Vesta; the species is honoured to the French botanist and orchid grower G.A. Lüddeman (1821-1884).

The Laelia lueddemanii (Prill.) L.O.Williams (1940) is an epiphytic species with pseudobulbs, on a robust rhizome, erect, clavate and grooved, 15-30 cm long and 2,5-4 cm thick, with usually at the apex two leaves, three at times, coriaceous, oblong, 18-30 cm long and about 4,5 cm broad.

Erect terminal inflorescence on a peduncle covered by lanceolate scales, 40-80 cm long, carrying several flowers which open all at the same time, with brown sepals and petals and purple labellum.

The sepals and petals are linear-oblong with quite fringed margins, 3,5-4,2 cm long, the labellum is trilobed, about 2,3 cm long, with oblong lateral lobes and ovate and curved median lobe, having at the centre three keels (protuberances looking like the keel of a ship) of pale yellow colour, finally, the column is purple violet, arcuate, 1,5 cm long.

The flowering, which takes place in spring-summer, lasts about one month. It reproduces by seed, in vitro, by micropropagation and by division, with each section provided with at least 3-4 pseudobulbs.

It is a species with a spectacular flowering and relative facility of cultivation.

It requires medium-high temperatures, with winter minimum values preferably over the 14 °C, high humidity, 60-80%, and luminosity, also some hours of direct sun, to be in condition of blooming. 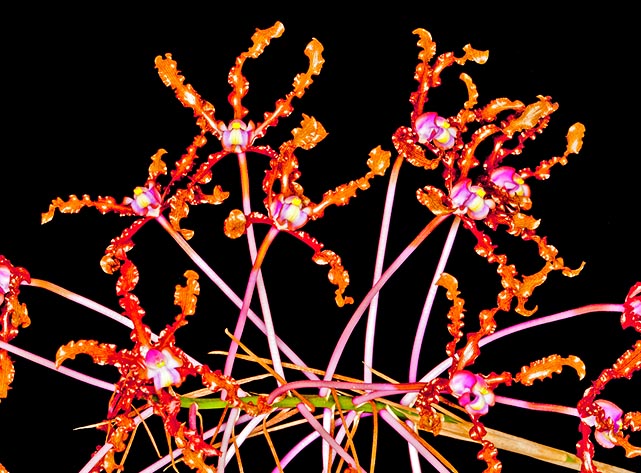 The 3,5-4,2 cm sepals and petals are linear-oblong with quite waved margins © Giuseppe Mazza

Waterings must be regular, but spaced in way to allow the substratum to dry up completely, more spaced, in order to give a short period of dry rest, after the flowering up to the vegetative restart.

For the watering and the nebulisations, it is to be used rain water, or water obtained by reverse osmosis or demineralised.

The fertilizations, duly distributed in function to the vegetative status of the plant and alternate, in way to avoid salts accumulation at the roots, are to be done preferably with hydro-soluble balanced products, at ¼ of the dosage suggested on the package.

It can be mounted on bark, trunks, cork or arborescent ferns roots rafts, or placed in pots with much draining and aerated compost, which can be formed by medium sliced bark fragments with possible addition of inerts for improving the drainage.