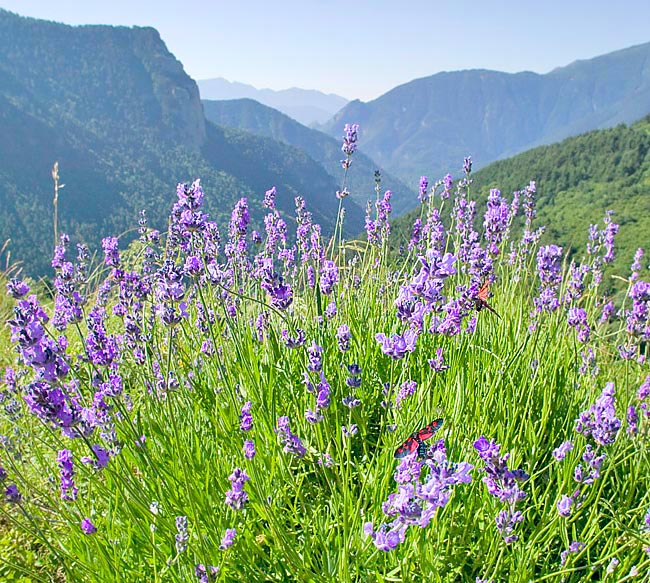 The genus Lavanda L. includes about 40 species of small shrubs (Nanophanerophytes), seven of which are present in Europe, besides several subspecies.

The well known true lavender or spike (Lavandula angustifolia Miller, 1768) is a species with Steno-Mediterranean-western distribution, inclusive of the territories facing the western basin of the Mediterranean, from Liguria to Spain, up to Algeria. Being a species cultivated since the antiquity, it is present as naturalized plant also in many other zones having Mediterranean and sub-Mediterranean climate.

The name of the genus comes from the Latin “lavando”, because this plant was used since the old times in the water of the baths and of the washhouses for its nice smell; “angustifolia” is referred to the elongated and narrow leaves.

The leaves are persistent, sessile, entire, linear, strictly lanceolate or oblong, of 2-4,5 cm, initially flat and greenish on the two pages, then revolute at the margins and white tomentose especially below. 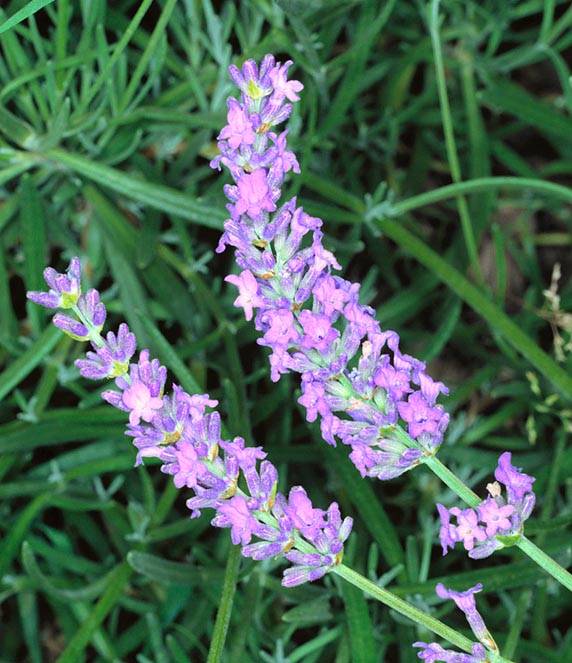 Flowering lasts from June-July up to September. The fruit is an indehiscent dry tetra-achenium, with 4 oval-elongated seeds of bright brown colour.

It grows in the arid stony and rocky locations, in the low thickets and in the garrigues (0-1800 m), frequently cultivated in the orchards and gardens. Of this entity, besides the nominal subspecies, is also the subspecies pyrenaica (DC.) Guinea (1972) present on the Pyrenees and in north-eastern Spain. From the lavender, widely cultivated especially in France and in England, where it creates landscapes of great beauty, but also in some Italian regions, they collect the flowers by the beginning of the flowering, they get an essential oil, since centuries much used and much appreciated in perfumery and also in the pharmaceutical industry where it serves as odour corrective and as flavouring in antiseptic liniments, creams, lotions, gelatines. The multiplication of the lavender occurs by seed and by cutting; the second system is preferred for having soon productive plants as well as because when starting from the seed there is no certainty of reproducing the characters of the original plants.

Also as ornamental species, nowadays very much used in the traffic islands and for edgings seen its resistance to the dry and the cold; they have created several varieties such as the ‘Alba’, ‘Nana alba’ and ‘Dutch White’ with white flower; ‘Rosea’, ‘Royal purple’, ‘Old English’, ‘Loddon Pink’, etc. In particular, the flowering tops contain tannins, resins, a bitter principle and an essential oil formed by more than 100 components, among which various alcohols (linalool, geraniol, borneol, cineol), acetate of linalyl, combinates with organic acids (acetic, butyric and valeric), saponosids, cumarin, etc.

These substances confer the preparations based on lavender anti cough properties, as liniment, balsamic, bronco spasmolitic, antiasthmatic, antispasmodic, antidepressive, mild sedative, antihysteric, antiseptic, antifermentative-antiputrid, carminative, diuretic, tonic and, externally, vulnerary. The herbal medicine utilizes it internally for treating asthma, cephalgia, flatulence, hysteria, anxiety and nervous restlessness, laryngitis, convulsive cough, vomiting. Externally, in the abrasions, contusions, wounds, neuralgias, chronic otitis, etc. In order to favour the sleep it is possible to prepare some pillows filled up of various dried flowers and leaves with calming properties, such as those of lavender and the infructescences of the hop. 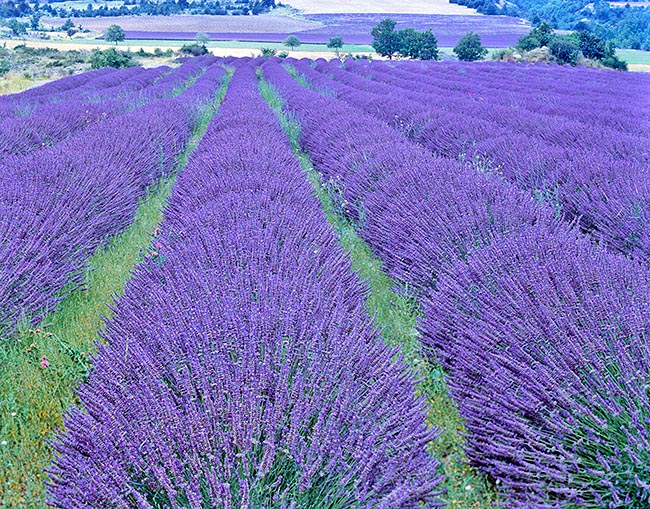 The insects shy away from some of the components of the lavender, it is therefore useful, for avoiding annoying bites, to wash up with lavender soaps and to rub the skin with lavender water or cologne. In the past, it was used for fighting itch and scabies. Also small canvas bags placed in the drawers and the closets where the clothes are put, besides pleasantly perfuming the clothes, keep far away the moths. On the contrary, the bees are attracted by the lavender flowers which they often visit producing an excellent and praised honey.

Infusion calming convulsive coughs, sedative against the migraine and the cardiac neurosis

One spoon of flowered tops in a cup of water. To leave twenty minutes in infusion, sweeten with honey; preparation to be consumed thrice a day.

To prepare a decoction with three handfuls of flowered tops, to boil for twenty minutes in two litres of water, and pour in the bath tub.

100 grams of flowered spikes in one litre of 95° alcohol; to macerate for a month. To filter with tissue paper and conserve in small dark glass bottles. Excellent cologne water for the toiletry, very useful especially in summer when the perspiration is more abundant.

Lavandula angustifolia was last modified: May 29th, 2020 by Giuseppe Mazza