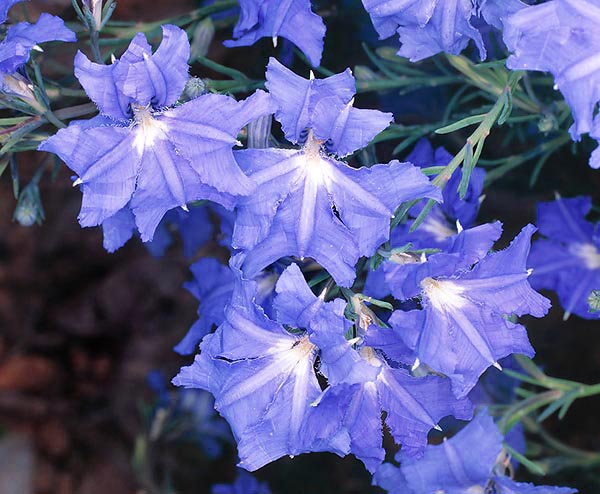 This plant is native to south-western Australia, where it grows on granitic and lateritic soils in sparse woods or in areas characterized by rich and low vegetation, locally called kwongan, with a markedly seasonal climate with mild and little rainy winters and warm and dry summers; the fires, which have an important role in this type of vegetation, are frequent.

The genus is honoured to the French botanist Baptiste Leschanauilt de la Tour (1773-1826), the name is considered as valid without the “s”, because it is so reported, erroneously, by Robert Brown in its opus where he established the new genus (1810); the name of the species is the combination of the Latin words “bis” = twice, and “lobus” = lobe, with reference to the bilobated petals.

The Lechenaultia biloba Lindl. (1839) is an evergreen shrub with a rather short life, with woody base and partly prostrate posture with several thin stems, up to 1 m tall, even if, usually, it keeps lower (30-60 cm), and up to about 60 cm broad.

The leaves are close, linear, fleshy and pointed, of pale green or green-grey colour, up to about 1 cm long. The numerous flowers are terminal, with typical petals with two pointed lobes, usually of an intense blue colour, and have a diameter of 2-3 cm. The reproduction takes place usually in summer by cutting which roots easily, whilst that by seed is deemed to be rather difficult. The fruits, dehiscent (which spontaneously open when ripe), are about 3 cm long and contain several cylindrical seeds, grooved, 2,5 mm long; it blooms and fructifies quite abundantly after the fires. 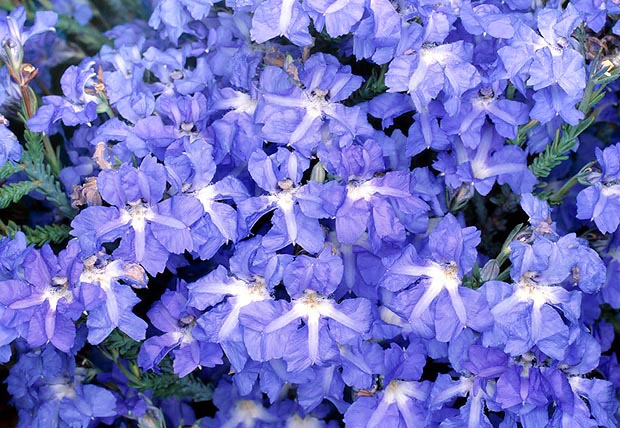 Cultivable in full sun in Mediterranean climates, is fit for showy flowerbeds or edges © Giuseppe Mazza

It is the most diffused and cultivated species of the genus due to its particular blue colour, considered as unique in the whole Australian flora; it is the floral emblem of the city of Kalamunda.

It is cultivable in the tropical, subtropical and warm temperate zones, in particular in the Mediterranean type ones, with climate characterized by marked seasonality, with little rainy winters and warm and dry summers, unsuitable for humid climates, where it is easily attacked by lethal rottenness; it may stand, if dry, temperatures of about -3 °C.

Ideal for edges, flowerbeds or as ground cover in full sun, even if it adapts to a slight shade.

The perfect drainage is fundamental for its survival; the substratum must be acidic, mainly formed by coarse sand and/or siliceous rubble.

In winter, the watering are to be reduced, allowing the substratum to dry up before giving water again, practically stopped in summer for the well rooted plants. It may be cultivated in pot, even if hanging, due to its slightly prostrate carriage, with the aforementioned cautions and trying to avoid, while watering, to moisten the leaves. Pruning must be done after the flowering in order to help the tillering and a greater compactness. Several varieties with different shades of colour have been selected.

Lechenaultia biloba was last modified: May 1st, 2018 by Giuseppe Mazza