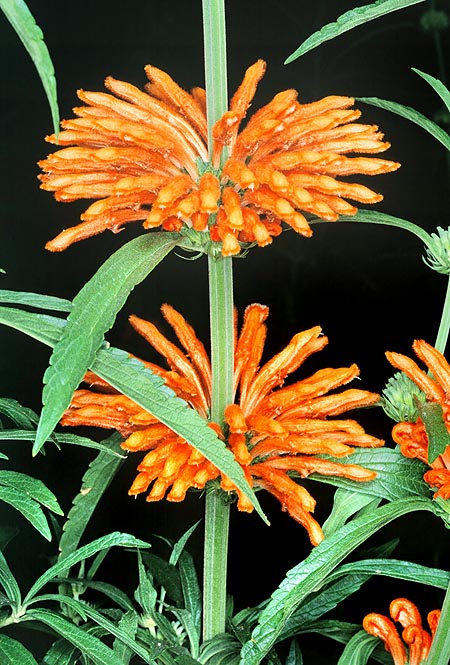 Nice and easy to grow, the Leonotis leonurus has also medicinal virtues © Mazza

This plant is native to South Africa (Cape Province, KwaZulu-Natal and Transvaal), where it grows between the rocks in the prairies or at the margins of the forests.

The Leonotis leonurus (L.) R.Br. (1811) is an evergreen perennial, or semi-evergreen, bush with woody base from which depart erect herbaceous stems with quadrangular section, not ramified, covered by a slight down, up to about 2 m tall.

The leaves are opposite, linear or lanceolate, 5-10 cm long and 1-2 cm broad, of a matt green colour with margins irregularly crenulated-serrate in the upper half. The inflorescences are erect with several tubular, 5 cm long, flowers of orange colour and covered externally by a thick down having the same colour, placed in false verticils which form each other in succession, around the nodes, in autumn; there are also varieties of white, apricot and red colour.

The fruit is the typical one of the Lamiaceae, subdivided when ripe in four brown, 6 mm long, achenes (one-seeded indehiscent dry fruits). In summer, it reproduces by seed, cutting, also in water, and by division; it easily self-disseminates.

It is a species of remarkable ornamental value and easy to cultivate; it requires full sun, or, at most, a slight shade, and regular, but spaced in time summer watering, in order to allow the soil to dry up and it may resist also to long periods of dryness; Not particular about the soil, even if poor, provided well drained, as it does not bear the water stagnations which may cause deadly rottenness. It resists to the high temperatures as well as to the relatively low ones, when around the 0 °C the aerial part gets damaged, but the woody base may resist to the -5 °C and resume vegetating in spring. Furthermore, it has a fairly good resistance to the saltiness and may be then also employed in gardens close to the sea.

In order to encourage tillering it is good to do a low pruning, by the end of the blooming or by the beginning of spring. Where the climate does not allow the permanent cultivation in open air, it may be employed as annual, seen its fast growth, sowing in winter in a protected location and planting by early spring. It is cultivable also in pot for the decoration of patios, terraces, greenhouses and luminous verandas in a rich substratum, well draining, to be regularly watered in summer, moderately in winter and with periodical fertilizations rich in phosphorus; it has also a limited use as cut flower.

Stems and leaves are variously and widely utilized, due to their anti-inflammatory properties, in the traditional medicine, against fever, cephalalgies, cough and other pathologies like dysentery and asthma; the most important active principles contained are the leonurine and the marrubiine, as well as tannins and saponins.

Leonotis leonurus was last modified: May 1st, 2018 by Giuseppe Mazza