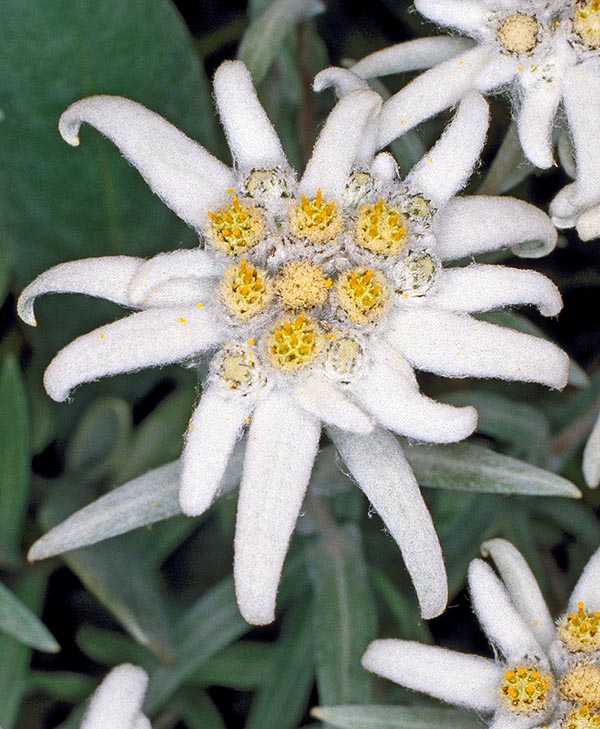 The name of the genus Leontopodium comes from the Greek “leontos” genitive of “leon” = lion (λεωνλεοντος) and “podion” ποδιον diminutive of “pous” = foot (πουςποδος), therefore small lion’s foot, with reference to the shape of the flower which should remind a lion paw. The specific epithet nivale in Latin means “related to the snow”, because of its presence in high-mountain environments

The old name of the genus originally attributed by Linnaeus “ Gnaphalium ” means in Greek tuft of wool from “gnafallon” (γναφαλλον) = flake of wool (“gnafalos” γναφαλοσ was the name of a hairy plant).

To the genus Leontopodium belong about 30 species with mainly Asian and European distribution. The area of greatest diffusion stands in Central and Eastern Asia, the centre of diversities is located in the Sino-Himalayan region in south-western China, where 15-18 species are present.

The Leontopodium nivale has probably reached Italy during the glacial ages, when the steppe habitats of the area of greatest diffusion of the genus Leontopodium have spread to most of Europe due to the climate changes.

The typical habitat of Leontopodium alpinum is the Alpine pastures or the broken and crumbly rocks (and not, as in the imagination of the tourists, the most inaccessible and steepest rocks) at an altitude between the 1500 and the 3000 m. The blooming occurs between June and September. Due to the excessive collection, the species has become very rare. Presently, its collecting is forbidden, in Italy as well as in the other Alpine countries.

It’s a perennial plant, 8-15 cm tall. The stem is woody at the base, short and erect, whitish due to the abundant tomentum (thick pilosity). The leaves are grey and tomentose, the basal ones, of about 2-4 cm, spatulate, those of the stem, elongated, linear (2-3 mm x 24-40 mm). 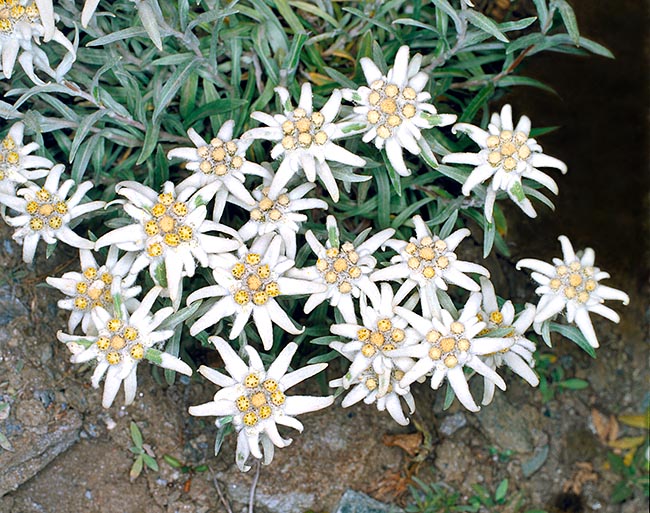 The inflorescence is apical, formed by a glomerule of numerous (3-12) yellowish capitula, one of which, the biggest, is surrounded by the others, smaller. Each capitulum, formed only by yellowish tubulous flowers (the ligulate ones typical of many Asteraceae are absent), is surrounded by a multiple casing of small scales, representing the sepals of the calyx, often with dark apical border.

The glomerule is surrounded by 9-15 intensely woolly bracteal leaves, acute and arranged in a star, with calling function for the pollinating insects (the shape and the disposition of these bracteal leaves stands at the origin of the Italian name of stella alpina.

The role of woolliness is that of limiting the excessive loss of water by transpiration, in relation to the fact that the plant is native to arid habitats and of protecting from the ultraviolet rays (and not, as often we read, as protection against the cold).

The bright white colour of the woolliness is due to thousands of microscopic air bubbles which reflect the light and represent consequently a call for the pollinating insects and a further protection against the evaporation and the ultraviolet radiations. The nectar contains some amino acids essential for the metabolism of the pollinating insects.

After blooming, the bracts wither, and in the female capitula the seeds ripen. The fruits are oblong achenes, equipped with a pappus, which are carried away by the wing and further dispersed especially thanks to the ants. Since a few years, it is also often cultivated and sold in pot. The cultivated plants, growing at low altitudes, are usually taller, have scarce woolliness and of greenish colour.

This subspecies, besides the central Apennines, at altitudes of 2300 to 2800 m, is present on the Pirin Mountains in Bulgaria and on the Prokletije Mountains in Montenegro. 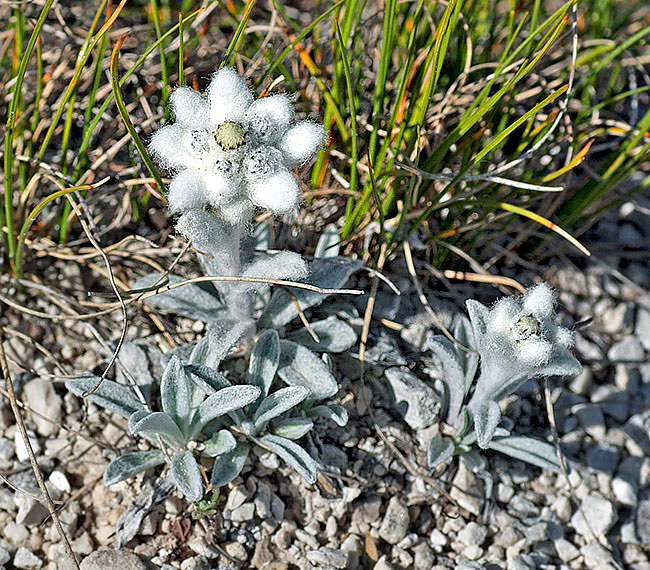 This particular trans-Adriatic distribution, common to various other botanical species, can be explained considering the lowering of the level of the Adriatic Sea during the glacial periods and the simultaneous extension of the steppe habitats typical of the origin ranges of the genus Leontopodium. These conditions should have allowed the diffusion of the species in the whole Balkan area, in the lands emerged thanks to the lowering of the sea level and in Italy. The following increase of the temperatures should have then reduced drastically the habitat, limiting it to the high mountain areas of present localization.

Legends and mythology of the Edelweiss

Due to its typical appearance, the typically high-mountain habitat and its rarity, the edelweiss has become the symbol of the mountains and of alpinism since the first half of the ‘800, with the development of the mountain tourism and of the exploration of the Alps. In two Alpine countries, Switzerland and Austria, the Edelweiss is practically the national symbol and the German Alpine Club (Deutscher Alpenverein) as well as the Austrian (Österreichischer Alpenverein) have inserted it in their emblem.

The edelweiss has been also inserted in the coat of arms of the Union of International Mountain Leader Associations (UIMLA). In line with these symbologies stands also the fact that the image of the edelweiss is inserted in the badges of the Alpine troops of Switzerland, Germany, Austria, Poland and Rumania.

For the romanticism, mainly German, the edelweiss has become the symbol of the boldness and of the conquest of the difficulty, also in the absurd myth that the collecting and holding one specimen might aver proof of uncommon courage. This stupid idea has been and is still now cause of mountain accidents borne by unwary who venture into difficult grounds looking for a flower which, on the contrary, grows especially on grassy slopes. The greediness of flowers collectors, besides the symbolic values, is stimulated by the fact the edelweiss conserve their characteristics even if dried and are therefore placed as “romantic” bookmarks or glued onto squalid postcards. Such a beautiful flower, characteristic and typical of high mountain, could not be absent in the popular legends of the Alpine countries. I report as an example only the Swiss legend after which this flower was yore a so nice-looking girl (and full of herself) to refuse every courter. She was then carried, still virgin (nowadays we would say spinster) on the high peaks and transformed into a flower called Edelweiss (Edel in German means noble and Weiss means white). Only the most courageous men may aspire to grasp the reluctant flower. 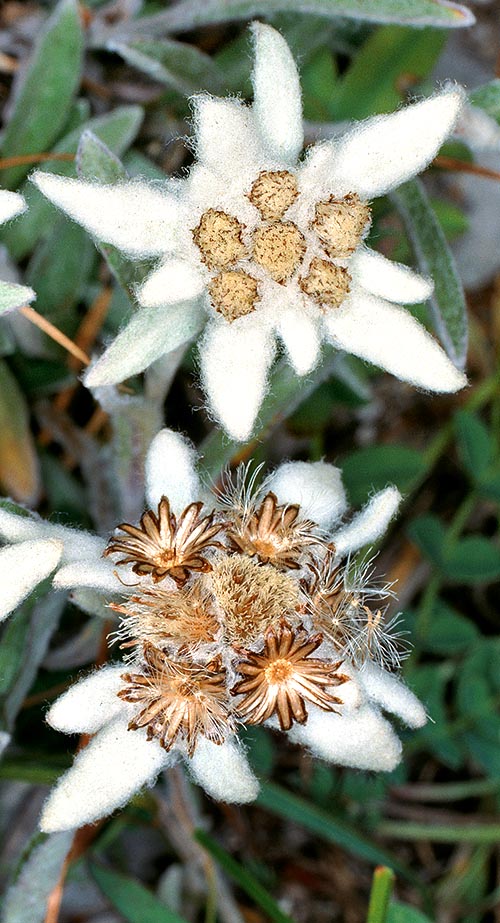 It has been said that the Edelweiss was the flower preferred by Adolf Hitler. Actually, as reported by Albert Speer, it was an invention of the Nazi propaganda, originated from a misunderstanding: on the occasion of an event they wanted offer Hitler some flowers, and, ignoring his preferences, they offered him the edelweiss, being these rare flowers.

On the contrary, it must be remembered that an opposition to the Nazism, even if unluckily losing, came from the “Pirates of the Edelweiss” (Edelweißpiraten), youth groups who rebelled against the regimentation done by the party and used as insignia the edelweiss during their demonstrations. During the war, members of these groups supported the Allies and the German military deserters.

The edelweiss, now tedious symbol of the fake mountain, gives the name to a plethora of restaurants, hotels and other touristic structures, not only along the Alpine region, but also in mountain locations which have nothing to do with the Leontopodium like, for instance, the Argentine and Chilean ones.

The edelweiss with its role of symbol of the mountain and of the mountaineers is of course present in many mountain songs, diffused in all the countries of the Alpine region. We remind only what is probably the nicest choral piece of the mountain tradition, dedicated to the Friulian mountaineers sent to death during the Great War. (Stelutis Alpinis text and music by Arturo Zardini in Friulian dialect).

If you come up here amongst the rocks, where they have buried me, there is a clearing full of edelweiss: it has been watered by my blood.

As sign, a small cross is carved into the rock: among those stars grows the grass, under them I sleep peacefully.

The Leontopodium was and is used in the traditional medicine of the Alpine countries with various indications, for instance as astringent, antitussive, against the rheumatic pains, anti dysenteric and against the stomach ache (some of these applications are justifiable on the base of active compounds actually found in the plant). It is mainly utilized in form of powders, infusions or alcoholic tinctures or boiled in the milk and honey. To the utilization for the gastric or intestinal ailments is related the Bavarian name (today little utilized) of Bauchwehbleaml (Bauchwech means bellyache and Bleaml (= Blume) means flower, therefore, “flower of the bellyache”.

Due to its natural habitat, the edelweiss is exposed to high UV irradiation and to extreme conditions of temperature and humidity. It has consequently developed a series of protective metabolites that may have practical utilization for the protection of the human skin and, actually, there are in commerce creams for the skin based on edelweiss to protect the skin from the ultraviolet rays. In order to avoid a collection of wild specimens, for the preparation of medicinal substances are arranged cultivations of Leontopodium in high mountain habitats, such to reproduce the natural habitat and therefore not modifying the properties of the plants. Some scholars, Austrian mainly, have analysed extracts of Leontopodium, evidencing the presence of various substances having pharmacological properties potentially utilizable (we must highlight that, for avoiding to destruction of precious specimens of this protected plant, they utilize cells of Leontopodium cultivated in vitro).

The evidenced pharmacological activities include: capacity of extracts to inhibit the migration of the cells responsible of the inflammation, such as leucocytes and mastocytes and therefore potential anti-inflammatory properties, and antimicrobic properties, which have been proved, at least in laboratory, towards various pathogens, such as Enterococci, Staphylococci and Streptococci (these findings are in line with the traditional uses for treating the lung and intestine diseases). 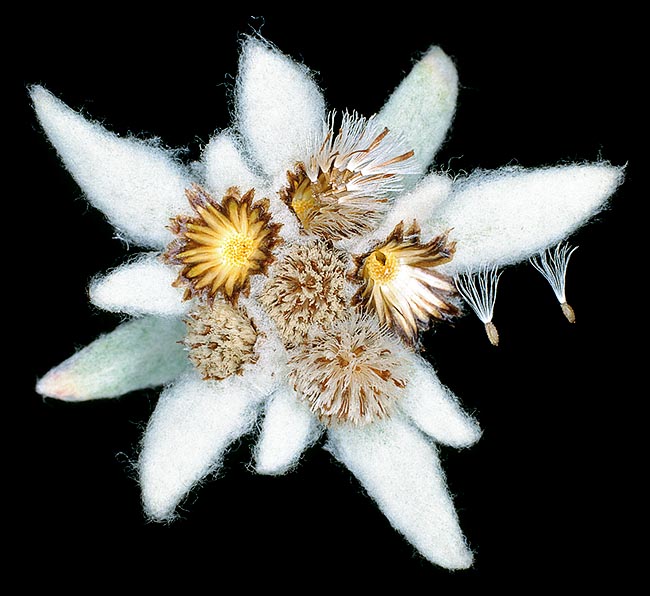 With the pappus they are carried by wind and dispersed by ants. The plant has medicinal virtues © Mazza

Moreover, the extracts show antimycotic and antiparasitic activities against the mites.

They have also evidenced substances with possible analgesic properties. The results obtained show also a potential cosmetic interest, due to the presence of substances with activities anti-radicals free, anti-inflammatory, anti-oxidant, for a possible employment in solar and anti-ageing creams for the skin.

Other studies have evidenced the presence of substances that might have activity on the nervous system, evidencing a pro-cholinergic function, that is, stimulant of the activities of the synapses utilizing the acetylcholine as neurotransmitter. This activity suggests, after the authors who have studied them, potential anti-dementia applications and of improvement of the memory.

It is important to underline (as also the authors of the researches have done) that it is matter, in any case, of potential activities, evidenced in laboratory, without, for the moment, any applicative feedback.

Nonetheless, the industry has imme- diately taken advantage from these results for launching products boasting miraculous medical activities, as is the case of a Swiss tonic drink (I do not say its name so as not to tempt anyone) which, after the publicity, has revitalizing, antioxidant, anti stress, tonic, anti-inflammatory, antimycotic, and bacteridial effects, prevents the effect of toxins, repairs the skin, reinforces the natural defences of the organism and slows down the senescence (and so on, and so forth). It is not known whether to place this substance amongst the pharmacological substances or the magical ones!

The Leontopodium was used for preparing love potions, able to guarantee the conquest of the beloved. It was also said that making a garland of edelweiss and wearing it might grant the invisibility.

For protecting oneself from the bullets of firearms, it was considered necessary to pick up the plants, roots included, on a full moon Friday and keep them in contact with the body. Furthermore, he who succeeded in cultivating the Edelweiss should have seen all his wishes become true.