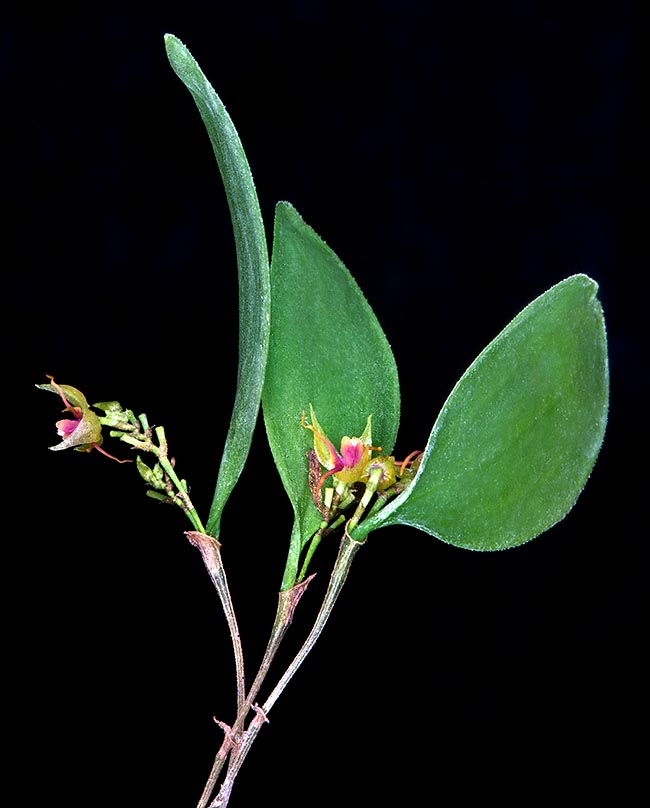 The species is native to the Dominican Republic (Sierra de Bahoruco) where it grows in the woods of broad leaved trees between the 1200 and the 1400 m of altitude.

The etymology of the generic name has not been specified by the author, after some it is the combination of the Greek substantives “λεπίς” (lepis) = scale and “άνθος” (anthos) = flower, with reference to the shape of the flower of many species. Others think it’s coming from “λέπος” (lepos) = bark and “άνθος” (anthos) = flower, seen that the plants of the genus live on the bark of the trees.

The specific name is the combination of the Latin adjective “teres, retis” = rounded, cylindrical, and of the substantive “petalum, i” = petal, with reference to the cylindrical petals.

The Lepanthes teretipetala Hespenh. & Dod (1990) is an epiphyte species, cespitose, with short rhizome and thin stems, ascending or hanging, 2-4 cm long, covered by sheaths ending with an infundibuliform ovate-acuminate expansion.

The stems are provided at the apex of one ovate-elliptic leaf with acute apex and microscopically denticulate margin,1,7-2,2 cm long and 0,6-0,8 cm broad.

It reproduces by seed, in vitro, and by division with each section provided of at least 3-4 stems. 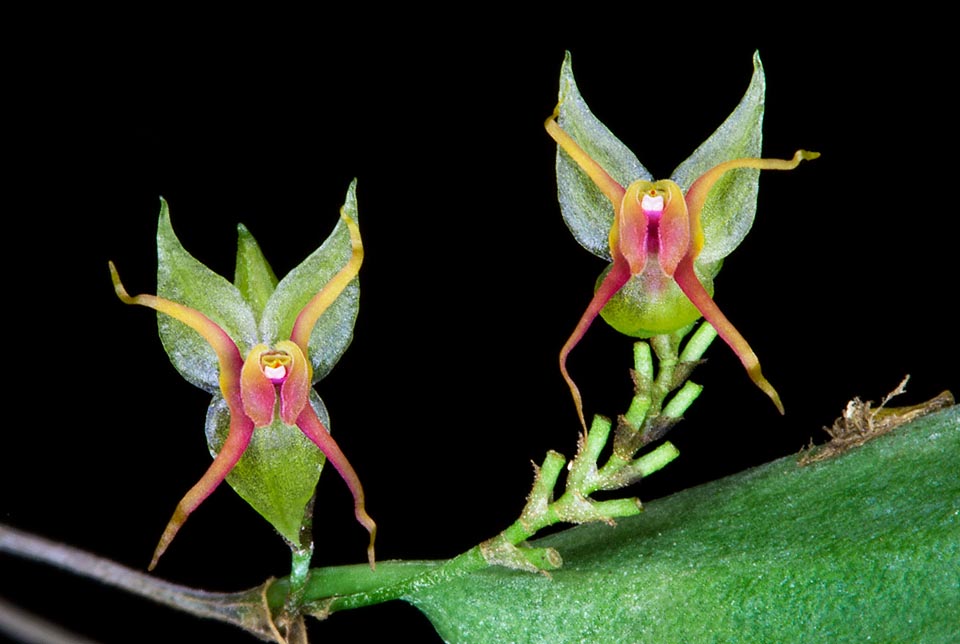 A wild night dance of the forest goblins? No, these are the tiny flowers of this species, with just 0,3 mm broad showy petals © Giuseppe Mazza

Mini orchid rare in cultivation, requires a semi-shady exposition, intermediate temperatures, with lowest winter ones not under the 15 °C, high ambient humidity and constant air movement. It is usually mounted on branches, pieces of bark, or rafts of cork, or of roots of arborescent ferns covered by a layer of sphagnum to maintain a constant humidity to the roots. Regular watering, but without stagnations that may cause rottenness, utilizing rain water, demineralized or by reverse osmosis.

The species is inscribed in the appendix II of CITES (species whose trade is internationally ruled).