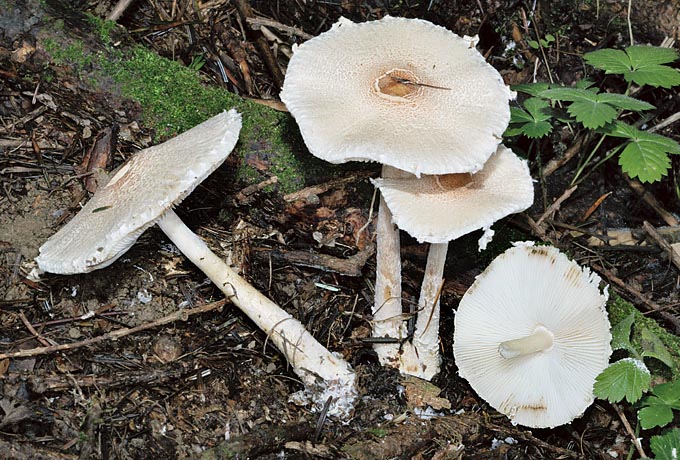 The etymology of the name comes from the Latin “clýpeus” which means round shield, which resembles to a round shield. As many not edible or toxic fungi, also this species has few local names. In Italy and in Germany none of them are known, whilst in Spain it is known with the name of “lepiota en escudo”; in France as “lépiote en bouclier”; in England as “shield dapperling”, in USA as “shaggy-stalked Lepiota”.

Description of the Genus, of the Section and Subsection

To the genus Lepiota are ascribed medium-small fungi, terricolous or fimicolous, which have squamulose-scaly cap, fibrillose, only rarely it can be glabrous. The central stem, at times with bulbous base, more or less slender, with ring at times mobile, at times with floccose-cottonlike remnants. The gills are mainly crowded, with lamellulae of white or whitish colour, at times nuanced with pink. The spores are white, smooth, ellipsoidal, fusiform, ovoid, and spindle-shaped. All the species belonging to this genus are inedible, some of them are lethal. To the section Lepiota belong those species having the cuticle formed by trichoderm hyphae (multiform hyphae, perpendicular or almost to the surface, but not parallel to each other), more or less hairy stem, often with coloured scales, or with fragments of evanescent ring, fusiform spores, not spindle-shaped (projectile-shaped with almost truncated base). The subsection Fusisporinae includes species with more or less coloured cap, with generally well delimited discal doom, outside the disk with more or less concentric scales.

Cap: 3-8 cm of diameter, initially hemispheric, then conical-campanulate and finally flat, with obtuse umbo; floccose-appendiculate margin when young, then fissured, almost striated. Felty cuticle when young, then fissured towards the margin in fine raised scales, smooth at the disc; the colour is brown-ochre, brown-reddish, on white-cream background which can be seen among the lacerations of the scales.

Stem: 5-9 x 0,6-1 cm, slender, cylindrical, enlarged towards the base or clavate, rigid, frail, hollow, often curved; smooth surface over the ring, under decorated by a floccose-fibrillose down, whitish; the base is covered by a white down tending to darken when touched, the annular zone is fugacious and little differentiated; the colour is whitish, ochraceous, yellowing when ripe.

Habitat: it grows in summer and in autumn, in woods of broadleaf trees as well as in those of conifers, among the leaves.

Remarks: this is a very common and much diffused species, easily recognizable due to the typical downy covering the stem under the ring, and due to the well delimited discal doom, smooth and uniform, surrounded by small concentric scales. Very similar is the Lepiota ventriosospora Reid, which, however, has the stem covered by yellow-orange flakes and longer spores; the Lepiota ignivolvata Bousset & Josserand ex Josserand, has, on the contrary, smooth stem, under the ring has some small irregular brown ochraceous rings, the base sheathed by rhizoid hyphae, presents, furthermore, always at the base, a reddish, red-orange, colouration, for about 2 cm of height, detectable after the collection, especially the following day.