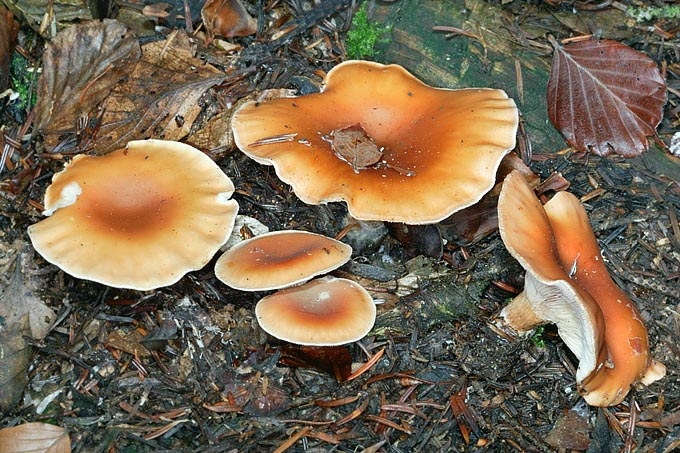 The etymology of the epithet “flaccida” comes from the Latin “flaccidus” = flabby, limp, hanging, saggy.

Description of the genus, subgenus and section

The species ascribed to this genus have a tricholomatoid-clitocyboid appearance, of more or less average size, with more or less elastic flesh and the gills which easily separate from the flesh of the cap (heterogeneous), the spores cream-pink or cream-brownish in mass, finely warty-echinulate, dotted or rugose, cheylocistidia almost absent or scattered and rare.

The subgenus Paralepista includes species having a clitocyboid habitus, decidedly decurrent gills, thick, poorly separable from the flesh under the cap, white or cream-pink in mass spores, short and sub-globose, finely warty.

Cap: 4-10 cm, initially convex, then flat and finally depressed at the centre, infundibuliform; thin margin, initially inrolled, then, for long time, bent downwards, straight when completely ripe, regular before then wavy; not separable cuticle, smooth, greasy and shiny in wet weather, with thin radial fibrils more evident towards the margin, glabrous, often with presence of dark droplets which, while sinking into dimples, break, allowing a glimpse to the clear colour of the underlying flesh; the colour is yellow-red, then red-yellow tending to reddish, while ageing tends to bright brown. 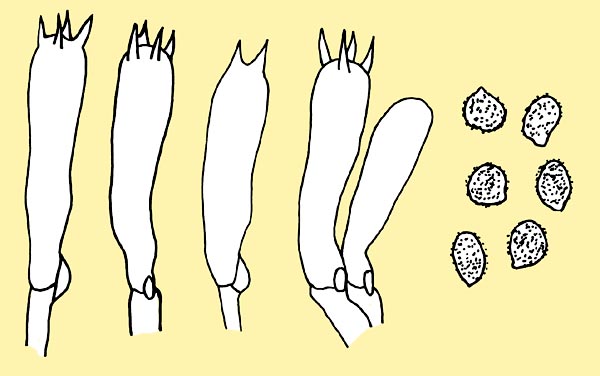 Hymenium: very decurrent gills on the stipe, crowded, narrow, irregular, some forked, arcuate, more or less easily separable from the flesh of the cap, intercalated by lamellulas; the colour is initially cream, then yellow-ocherous, reddish when ripe.

Stipe: 3-6 x 1-1,5 cm, cylindrical, slightly enlarged at the base, attenuated on top, flared under the gills, fibrous, firm, full then hollow; surface with thin longitudinal reddish fibrils, the base is covered by a white felting, which typically embeds the substratum; the colour is whitish, then of the same colour as the cap.

Habitat: it grows in summer and in autumn, in coniferous as well as in broad-leaved trees woods.

Remarks: this is a very common fungus, usually growing in irregular rows or cespitous, with several specimens united at the base. It can be mistaken with the Lepista gilva (Persoon : Fries) Roze, which, however, has a paler colour on the cap, the surface smooth initially then spotted by droplets especially towards the margin and more or less zonate. Another possible confusion may occur with Clitocybe gibba (Persoon : Fries) P. Kummer, which, however, has a much depressed cap, funnel-shaped, smooth, the gills which do not separate from the flesh of the cap, cyanic smell, the spores, white in mass, are small and smooth.