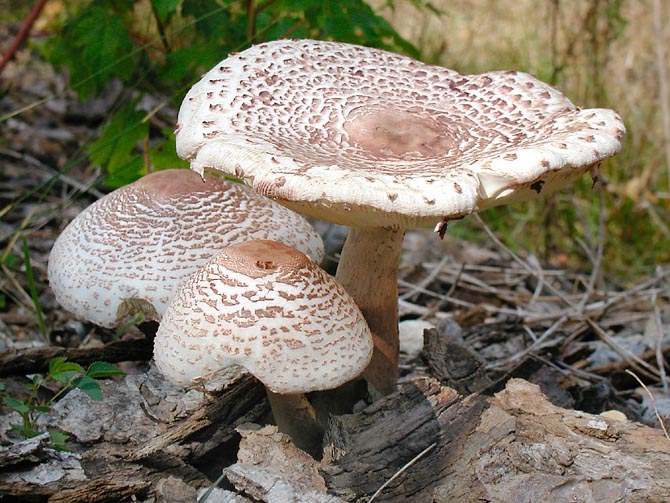 The etymology of the name comes from the Latin americanus = American, of America.

It is a not interesting fungus from the edibility viewpoint, and for this reason the common names used for identifying it are rather scarce. In Italy, it is known, very generically, as “culumbina”; in France, “lépiote fascicule”; in the rest of Europe there are no other common names.

To the genus Leucoagaricus are ascribed small, medium and at times even big species, heterogeneous with lepiotoid, tricholomatoid or collibioid deportment; the cap, whitish or coloured, at least partly, lively, the cuticle is smooth, fibrillose, scaly, powdery, dry and a little viscid; margin not striated; white or cream free gills with collarium; more or less cylindraceous stipe, at times enlarged at the base or bulbous, smooth, often hollow, fibrillose, scaly, normally with a membranous ring, mobile or not; flesh mostly meagre, whitish, cream, at times reddish or yellowish when cut. White or cream spores in mass. Terricolous, fimicolous, sabulicolous at times and on plants debris.

Description of the section and of the subsection

Cap: from 3 to 15 cm, initially oval, then convex up to flat, umbonate, white smooth and velvety cuticle, when breaking it gets covered by thick concentric scales starting from the margin, of cream colour up to brown-reddish to complete maturity, turns red when manipulated.

Hymenium: thick gills, free at the stem, with indented margin, high, white when young, cream-pink when ripe, stain of yellow and than of brown reddish when touched and compressed. 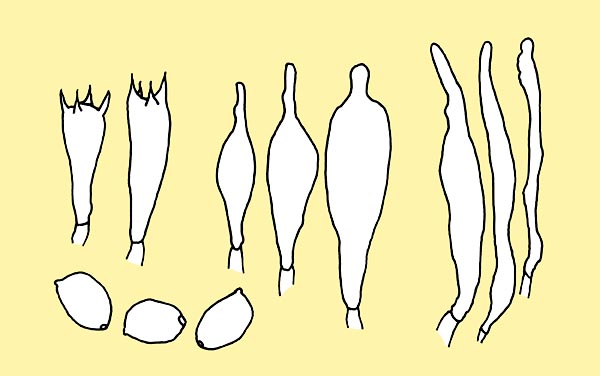 Stipe: up to 15 cm long x 1-2 cm of thickness, from fusiform to claviform, initially full then hollow, initially yellowing, then reddening when rubbed.

Ring: membranous, placed on the high past of the stipe, at times evanescent when ripe, white, can also become reddish in the ripe fungus.

Habitat: grows in small groups, mainly cespitous, from late summer to autumn, in humid zones rich of lignin, on the sawdust, on the litter of dried leaves, in parks and gardens; it does not disdain the dry climate, in such case, evidencing precociously the reddish hues.

Edibility: to be considered as not edible, slightly toxic when raw, it can cause gastric diseases to some people.

Remarks: this is a species which, due to its size and its habitus, recalls a Macrolepiota, so much that Peck himself relates that it was described in an article as Agaricus rhacodes (nowadays Chlorophyllum rhacodes = Macrolepiota rhacodes); but the microscopic characters and especially the reaction to the green of the gills at the vapours of ammonia and the turning, when rubbed, initially safran yellow then reddish, place this species into the genus Leucoagaricus, section Annulati, subsection Rubescente. In Peck’s description it is described the collection habitat, grass verge, as well as the location, Buffalo. A certain similarity occurs with Luecoagaricus badhamii (Berkeley & Broome) Singer, which, however, at the least touch immediately turns bright red and then becomes brown in 1 or 2 minutes; also the microscopy is different, in this last one, in fact, are presente claviform and ventricose cystidia, with appendage and containing a red pigment. For distinguishing it from the near genera (Cystolepiota, Macrolepiota, Leucocoprinus) it is important to observe, besides the appearance, the morphology and the sporal metachromasia, the pileipellis and the shape of the basidia.