Leucospermum: pincushion and … a feminist triumph 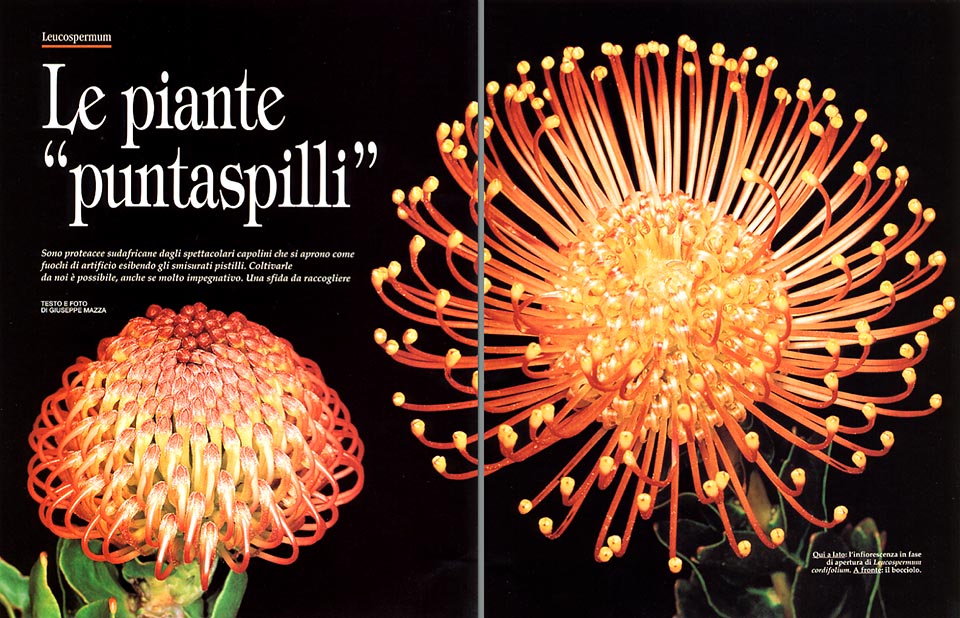 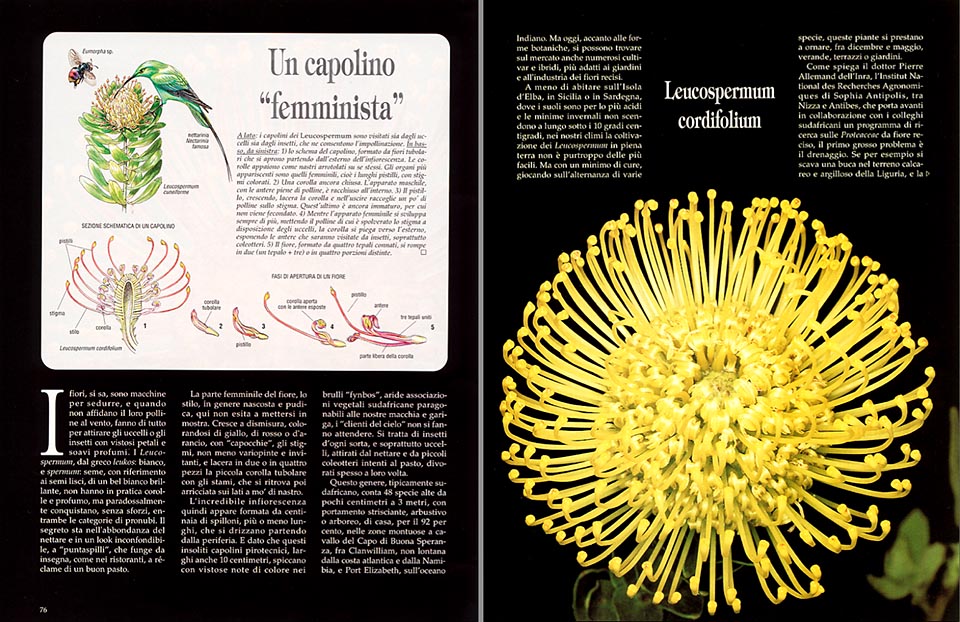 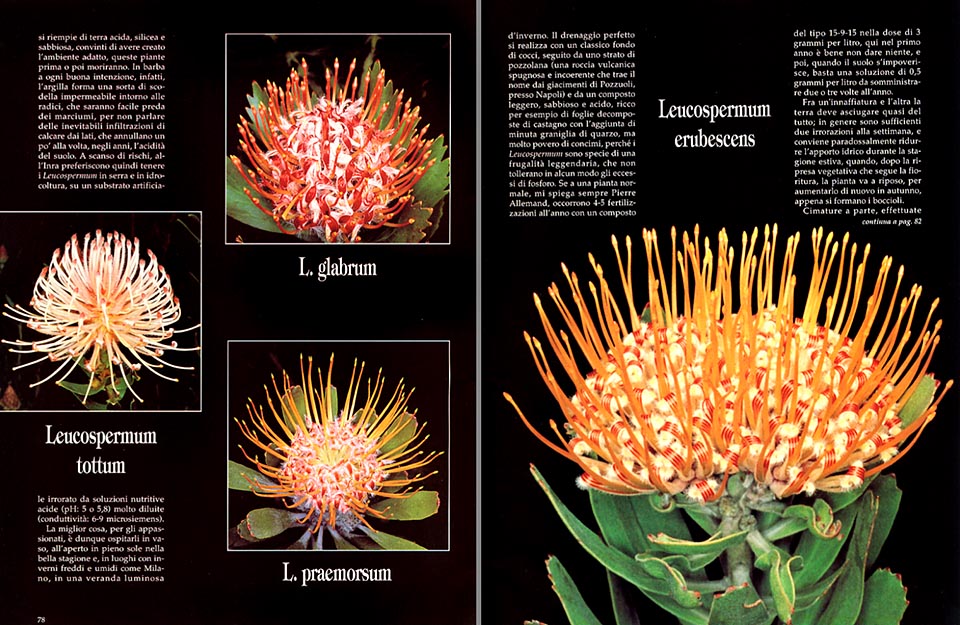 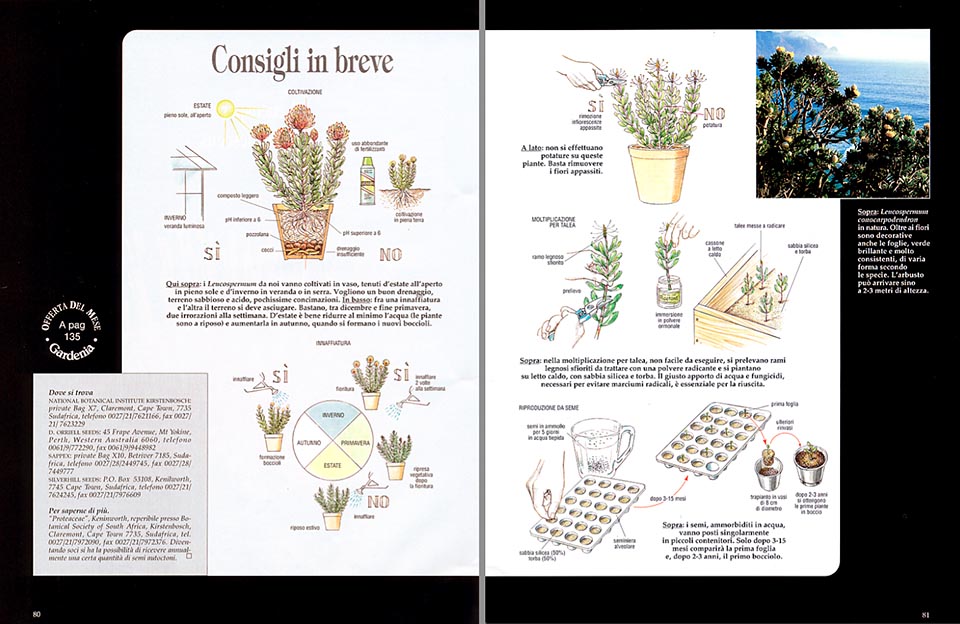 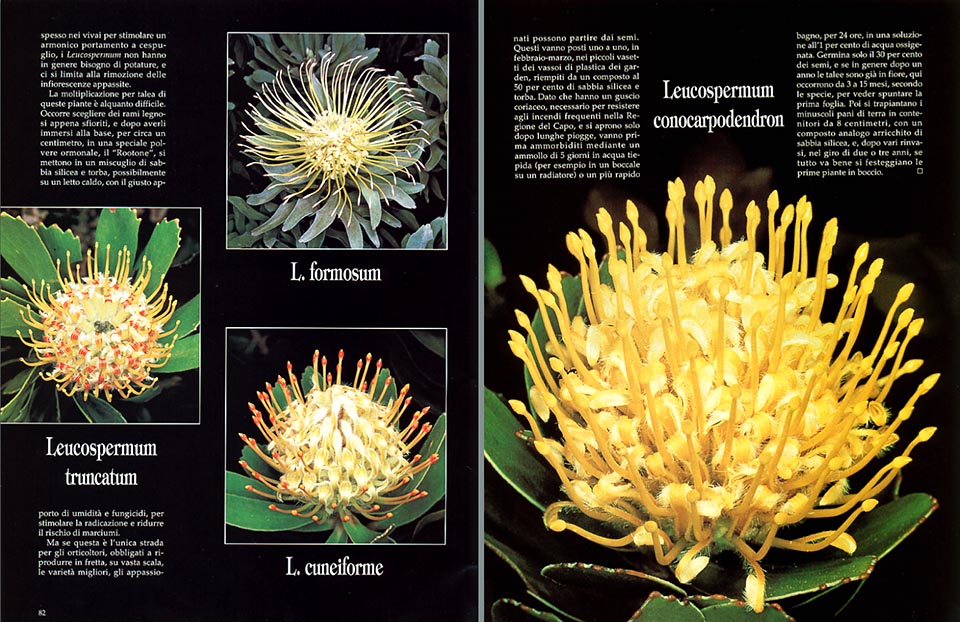 Flowers, it’s well known, are seduction machines, and when they do not entrust their pollen to the wind, they try all means for attracting the birds or the insects with showy petals and sweet scents.

The Leucospermum, from the Greek leukos=white, and spermum=seed, referring to their smooth seeds, of a nice, bright, white, practically do not have corollas or scent, but, paradoxically, conquer, without any effort, both categories of pollinators.

The secret stands in the copiousness of nectar, and in an unmistakable look, like a “pincushion”, which acts as a “signboard”, like in the restaurants, advertising a good meal.

The feminine part of the flower, the style, normally hidden and bashful, here does not hesitate in showing up. It grows up immoderately, colouring of yellow, red or orange, with “heads”, the stigmas, not less variegated and attractive, and tears in two or four pieces the small tubular corolla with the stamens, which becomes then curled on the sides, like a ribbon.

Hundreds of more or less long pins, which rise, starting from the exterior, in incredible inflorescences.

And since these unusual pyrotechnical heads, wide even 10 cm, stand out, with showy notes of colour, in the bare “fynbos”, arid vegetable South African associations, which are comparable to our “bush” and “garrigue”, the “clients of the sky” are not to be waited for.

All sort of insects, and, above all, birds, attracted by the nectar and by small coleoptera entirely taken up with the meal, often eaten as an extra, like a course, without too many scruples.

The lover of this typically South African genus, count 48 species, tall from few centimetres, to three metres, with creeping, shrubby, or arboreal appearance, at home, for the 92%, in the hilly areas through the Cape of Good Hope, between Clanwilliam, not far away from the Atlantic coast, and Namibia, to Port Elizabeth, on the Indian Ocean.

But nowadays, close to the botanical forms, we can find on the market also several culltivars and hybrids, more suitable to the gardens or to the industry of cut flowers.

Unless living in Elba Island, in Sicily, or in Sardinia, where the grounds are mostly acid and the winter lowest temperatures never go down, for long time, under 10 °C, in our climates the cultivation of the Leucospermum in full land is not, unluckily, very easy. But, with a little of cares, keeping different species, they are suitable for decorating, between December and May, verandas, terraces or gardens.

As explains Dr. Pierre Allemand of INRA, the Institut National des Recherches Agronomiques of Sophia Antipolis, which carries on, in collaboration with South African colleagues, a serious programme of research on the cut flowers of the Proteaceae, the first, great, problem is the drainage.

If, for instance, we dig a hole in the calcareous and clayey soil of Liguria, and we fill it up with acid land, siliceous and sandy, convinced of having created the suitable habitat, these plants, sooner or later, will decease.

In spite of every good intention, in fact, the clay forms a sort of “waterproof bowl”, and the roots will be soon prey of rottenness, not to talk of the unavoidable infiltrations of limestone from the sides, which annul, a little at a time, during the years, the acidity of the soil.

To avoid risks, at INRA, they prefer, then, to keep the Leucospermum in greenhouse and in hydroponics, on an artificial substratum bedewed by nourishing acid solutions (pH=5 or 5,8), much diluted (conductivity = 6-9 micro siemens).

The best thing, for lovers, is then to keep them in pot. In the open air, in the nice season, and in a luminous veranda, in winter, when in less suitable locations, as in Milan, with cool and humid air.

The perfect drainage is done with a classical layer of fragments on the bottom, followed by a bed of pozzolana (a volcanic rock, spongy and incoherent, which gets the name from the layers of Pozzuoli, close to Naples), and by a light compound, sandy and acid, rich, for instance, of decomposed leaves of chestnut tree and of quartz, but very poor of manures, because the Leucospermum are a legendary frugal species, and do not tolerate, in way, the excesses of phosphorus.

If for a normal plant, Pierre Allemand explains to me, we need 4-5 fertilizations per year, with a compound type 15-9-15, in the dosage of 3 grams per litre, here, during the first year, it’s good not to give anything, and then, when the soil becomes poor, it is sufficient a solution of 0,5 grams per litre, 2-3 times a year.

Between the various watering, the soil must dry up almost completely; generally two sprinklings per week are enough, and, paradoxically, it’s convenient to reduce the water input during the summer, when, after the vegetative revival which follows the flowering, the plant goes to rest, to increase it in autumn, as soon as the buds come out.

Apart cuttings, which are often polled in the nurseries in order to stimulate an harmonic bushy appearance, the Leucospermum do not need, usually, and pruning, and we shall have just to remove the withered inflorescences.

The multiplication by cutting of these plants is rather difficult. We have to choose woody branches just faded, and after having soaked them at the base, for about one centimetre, in a special hormonal powder, the “Rootone”, we have to put them in a mixture of siliceous sand and peat, possibly on a warm bed, with the right input of humidity and fungicides, to stimulate the rooting and reduce the risk of rottenness.

But, if this is the only way for the horticulturists, compelled to reproduce quickly, on large scale, the best varieties, the lovers can always start from the seeds.

They must be installed, one at a time, in February-March, in the microscopic small pots of the plastic plates of the gardens, filled up with a compound at the 50% of siliceous sand and peat, and since that they are done to resist to the fires, frequent in the Cape Province, and to open only after long rains, when there is plenty of water, they must be, before, “softened”, with a soaking of 5 days in lukewarm water (for instance on a mug placed on a radiator), or a faster soak, for 24 hours, in a solution at the 1% of oxygenated water.

Only 30% of the seeding germinates, and if, as a rule, after one year, the cuttings are already blossoming, in this case we shall need 3-15 months just for seeing the first leaf coming out.

Then, we have to transplant the tiny blocks of land in 8 cm containers, with an analogous compound enriched with siliceous sand, and after several changes of pots, after 2-3 years, we shall give a hearty welcome to the first plants in bud.

→ To appreciate the biodiversity within the family PROTEACEAE please click here.

Leucospermum: pincushion and … a feminist triumph was last modified: May 24th, 2019 by Giuseppe Mazza