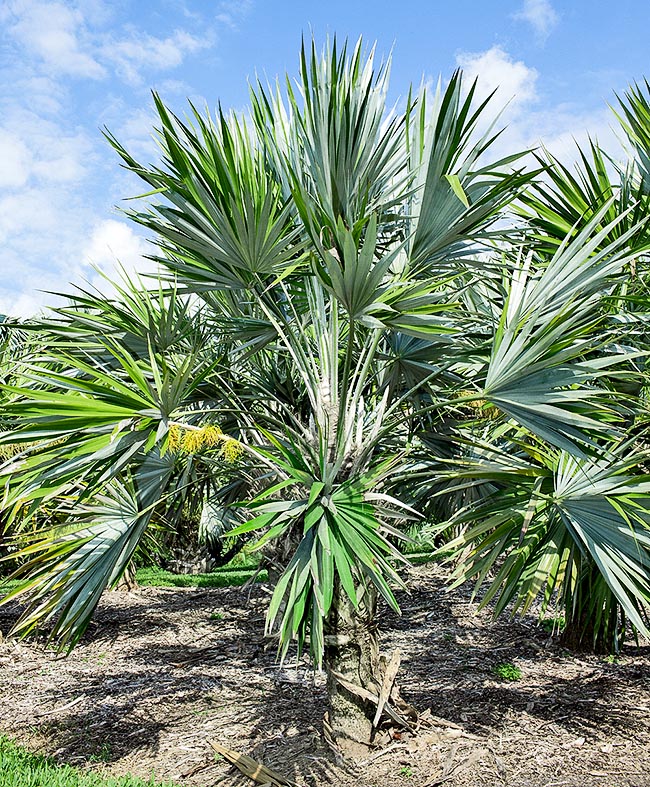 Native to the Caribbean area where reaches the 11 m of height, the Leucothrinax morrisii distinguishes for the glaucous lower page, with the short whitish down, in elegant contrast with the upper page © Giuseppe Mazza

The species is native to the Bahamas, Cuba, Haiti, Leeward Islands, Puerto Rico and USA (Florida), where it grows in the open coastal coniferous or deciduous forests, mainly on sandy and calcareous soils, at low altitudes.

The name of the genus is the combination of the Greek adjective “λευκός” = white, and of the genus Thrinax, where it was previously inserted and from which it distinguishes for the white colour of the lower page of the leaves; the species is dedicated to the English botanist Daniel Morris (1844-1933).

The Leucothrinax morrisii (H.Wendl.) C.Lewis & Zona (2008) is a monoecious species with hermaphroditic flowers, solitary, unarmed with erect stem, 7-11 m tall and of 15-30 cm of diameter, of whitish grey colour marked by the close-up annular traces of the fallen leaves. The leaves, on a 0,9-1,3 m long petiole, are palmate, almost circular, of 0,6-1 m of diameter, incised in 30-50 lanceolate segments with acuminate apex, 30-55 cm long and 3-4 cm broad, united at the base for less than a half of their length, above of bluish green or yellowish colour depending on the environmental conditions, glaucous below and covered by a thick and short whitish down. The base of the petioles, deeply fissured, is provided on the margins of fibres of straw yellow colour. Inflorescences between the leaves (interfoliar), 0,9-1,5 m long, initially erect then arcuate, yellowish, ramified, with 6-20 primary ramifications and several rachillae with hermaphroditic sessile or subsessile flowers. The fruits are globose drupes, on a pedicel long less than one mm, initially white, then yellowish when ripe, of 4-8 mm of diameter containing only one seed of about 2,5-3 mm of diameter.

It reproduces by seed, previously kept in water for 3 days, in sandy loam maintained humid, but without stagnations, at the temperature of 26-28 °C, with germination times of 1-3 months.

Species vastly diffused in the Caribbean area, in nature as well as in cultivation, for long time known as Thrinax morrisii until when the molecular analyses have not confirmed its belonging to another genus, already hypothesized on the basis of the morphological differences, among which, most evident, the colour of the lower page of the leaves, glaucous instead of green. 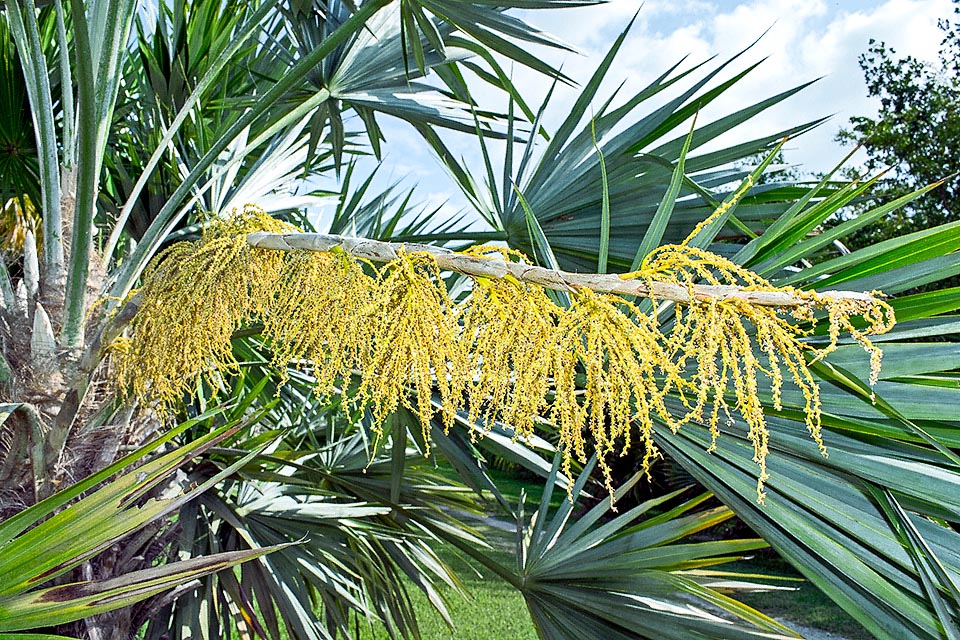 Monoecious species, with hermaphrodite flowers carried by showy yellowish inflorescences ramified, 0,9-1,5 m long, initially erect then arcuate, with 6-20 primary ramifications and several rachillae with sessile or subsessile flowers. Easy to cultivate, resists well the wind, the saltiness, the drought and temperatures up to -3 °C © Giuseppe Mazza

Of easy cultivation and adaptability to different environmental conditions, resists the wind, the saltiness and moderately the drought and the low temperatures, bearing without any damage values up to -3 °C. It grows preferably in full sun, but adapts to a partial shading, and on various types of soil, even poor, provided draining, slightly acidic to alkaline, even if preferring the sandy and calcareous ones. Particularly attractive due to the neat difference of colour between the upper and inferior parts of the leaf, it may be utilized as isolated specimen or in group in large as well as in small gardens, thanks to its contained dimensions.

In the origin zones the stems are utilized as poles and the leaves as cover for the rural dwellings and for realizing mats, baskets, brooms and other handicrafts.