The Leerfish (Lichia amia Linnaeus, 1758) belongs to the class of Actinopterygii, the ray-finned fishes, to the order of Perciformes and to the family of Carangidae.

The name of the genus appears to have a French origin. Already in 1410 they were talking of a fish “lecha” particularly greedy (it should come from the verb “lecher, être gourmand” = that is, literally, to lick, to be greedy).

The name of the species “amia” is the epithet with which the old Greeks designated a big fish as greedy as a shark. The name was zoologically taken by Linnaeus himself for creating the genus Amia which has only one member, the Amia calva, a North American fresh water fish, living fossil of an old stirp.

Hence, going back to our leerfish, this is a big greedy fish.

The leerfish is present in all the Mediterranean, Black Sea included, where however its number is scarce, as also is the case of the eastern coasts from Libya to Turkey. After Gibraltar Strait, we find it northwards, with a good density of population, up to the Gulf of Biscay. South of Gibraltar, with variable densities, it goes along African coasts, after having colonized the Azores, Madeira, Canary and Cape Verde islands, and then moves northwards in the Indian Ocean reaching western India.

It is a pelagic erratic species, which usually does not go down below the 50 m, but which gets close to the coasts only in spring for reproducing. It has been found also in brackish waters. 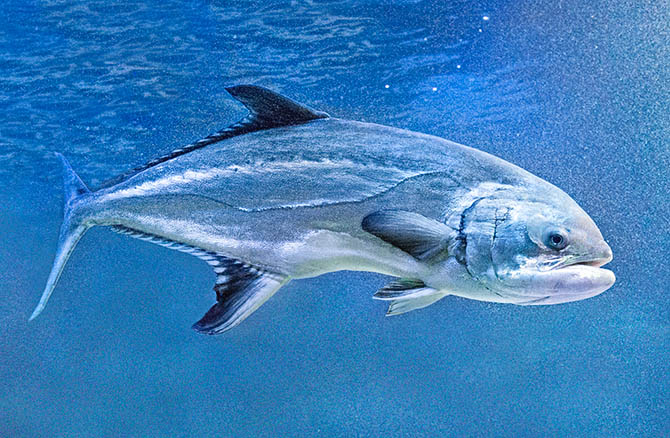 The Leerfish (Lichia amia) has a very vast diffusion. It can reach the 2 m and the 50 kg © Giuseppe Mazza

It can be 2 m long with a maximum weight of 50 kg, but the fished specimens rarely exceed the metre.

The body, very compressed on the sides, is covered by tiny scales, almost invisible, but the most striking matter is the quite unusual path of the lateral line, going down and then ascending again thus drawing a sort of an “U” at the centre. The snout is pointed, with an ample mouth and the lower jaw slightly protruding. The teeth, thin and tiny, are placed in rows on the jaws, and cardiform on the vomer, the palatines and the tongue. The eye is of modest size.

The dorsal fins are two and follow the architectural scheme of the Pompano (Trachinotus ovatus).

The colour is silvery grey, paler on the sides and darker on the back, which may assume also greenish hues. The tips of the fins are dark.

The leerfish is a fast fish hunting schools of fishes and molluscs. The juveniles, who have vertical bands, prefer, on the contrary, the crustaceans. Little is known about the reproduction which takes place in spring. After some, the eggs should be spawned on the stones, bonded with some mucus, after others, they are simply pelagic.

The vulnerability index of this species is of 75 over 100.