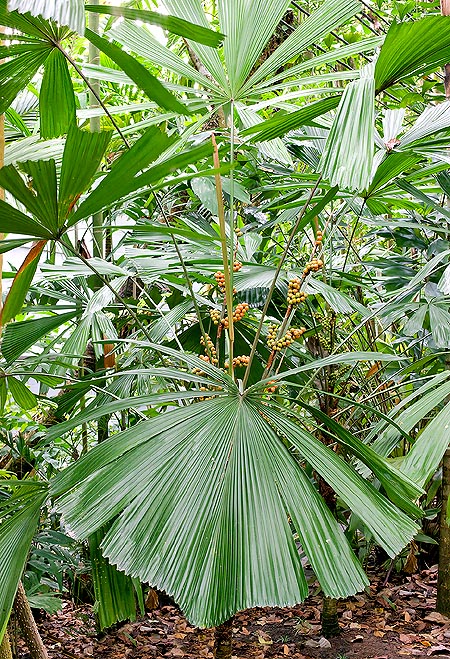 This plant is native to Australia (Queensland), where it grows in the pluvial forests along the north-eastern coasts, the banks of the rivers or in swampy areas.

It often forms large colonies, from the sea level up to about 600 m of altitude.

The name of the genus comes from the local name “leko wala”, given to this genus of palms in the Maluku Islands.

The species is honoured to the Australian botanist Edward Pearson Ramsay (1842-1916), who picked up the holotype.

The Licuala ramsayi (F.Muell.) Domin (1915) is a solitary plant, monoecious, with stems tall even 20 m, even if in cultivation they keep lower, and a diameter up to 20 cm, with a conical mass of aerial roots at the base, slightly enlarged, in the oldest plant.

The stem is grey or brown, almost smooth, with little evident foliar scars and small vertical cracks. Close to the crown, it is covered by the fibrous residuals of the foliar bases. The leaves are almost circular, and may reach even the 2 m of diameter, divided till the base in 17-23 cuneiform segments with a variable width, with 5 to 15 nervations, truncated and indented at the apex, of glossy dark green colour on the upper side, rather opaque below.

The petioles are 1-2,5 m long, thin, equipped at the margins with blackish, 0,5 cm long thorns for about one third of the length from the bottom. The base, with fibrous reddish brown margins, surrounds only partially the stem. The 1-3 m long inflorescences bear between the leaves. They are compound spikes, that is, formed by a main axis from which depart secondary ramifications (spikelets), distant each other about 15 cm. 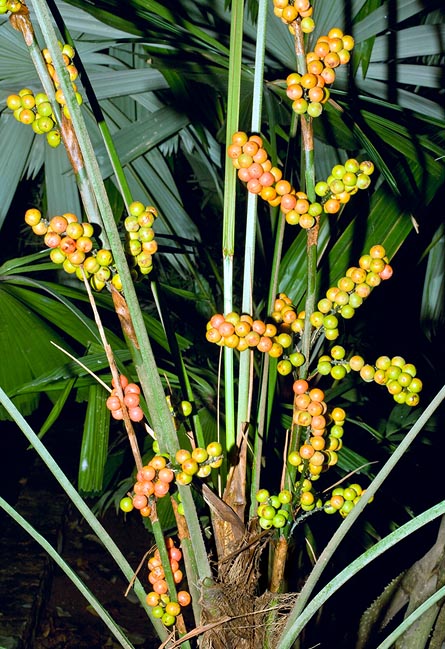 The about 15 mm fruits are carried by compound inflorescences © G. Mazza

They carry cream hermaphrodite flowers which have the phenomenon of the proterandry. The male organs, in fact, ripe before the female ones, thus avoiding the self-fecundation and helping the crossed pollination. The fruits are ovoid or globular, of about 1,5 cm of diameter, orange or red when ripe.

The Licuala ramsayi easily reproduces by seed.
When it is fresh, it quickly germinates, in a normal mould for sowing and coarse sand in equal parts, but then the growth is notoriously slow.

This palm, elegant and majestic, with the great circular leaves on long and thin petioles, would deserve a major diffusion as ornamental species. Perhaps its slow growth and the dimensions of the crown, not suitable for small gardens discourage its use compared to other species, less cumbersome, of the genus Licuala.

It grows well in the tropical and humid subtropical climate zones on soils rich of organic substance and well draining, possibly sandy. It loves the shaded locations when young, then, adult, it bears even the full sun. In any case, it is sheltered from the wind. Its cultivation in the temperate zones with particularly mild winters may be tried, as, when adult, it may resist to temperatures as down as -3 °C for short time, but with an even slower growth.

It needs abundant and frequent watering, especially in the warmest months; regular fertilizations may contribute to increase the speed of its growth.

It is to be placed isolated or in groups, leaving around enough room for giving the crown the possibility to expand freely. It has a great potential as pot plant for the decoration of interiors, the fact that it is perfectly comfortable in shade and the slow growth, which in open ground is a handicap, permit to maintain it for long years.