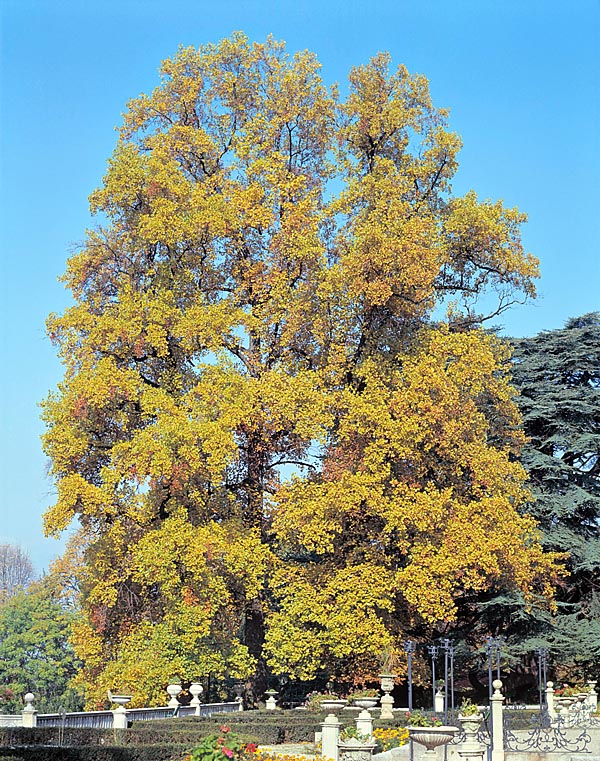 The Liriodendron tulipifera L. (1753) is an erect deciduous tree that can exceed the 50 m of height with cylindrical trunk, dark grey bark deeply fissured, which, in the oldest specimens, can exceed the 2 m of diameter.

The leaves, on a 5-12 cm long petiole, 10-18 cm long and broad, initially protected by two stipules, are simple, alternate, of variable and characteristic shape, truncated or slightly indented at the apex, usually with 2 lateral lobes almost triangular, of glossy dark green colour on the upper page, paler dull green below, turning golden yellow in autumn before the fall. The flowers, on an about 3,5 cm long petiole, are terminal, solitary, hermaphrodite, cup-shaped recalling the shape of a tulip’s ones, hence the name of the species, about 5-7 cm long and 4-6 cm of diameter. The flowers present 9 tepals, three external similar to sepals, generally bent backwards, deciduous, ovate-lanceolate, greenish white, and six internal similar to petals, erect, ovate or roundish, about 5 cm long and 2-3 cm broad, greenish yellow with orange irregular spot at the base, internally as well as externally, and several yellow stamina and carpels (floral structure similar to a leaf where are present ovary, style and stigma) spirally arranged on an elongated receptacle. 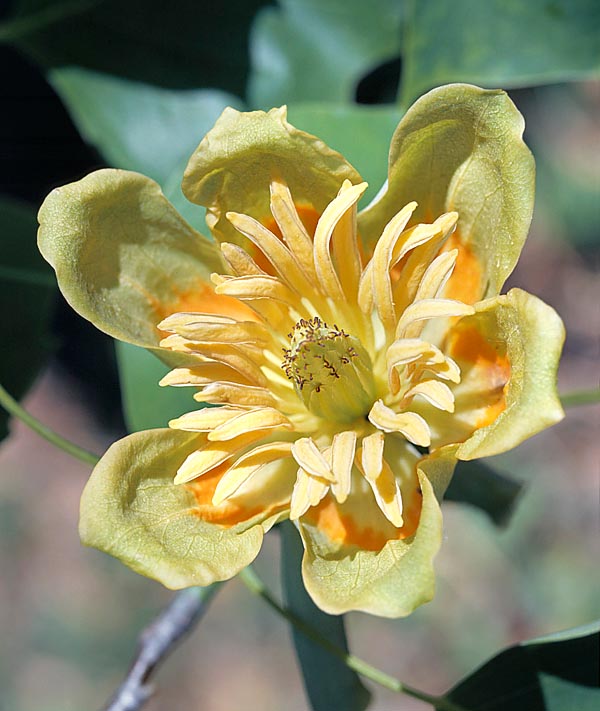 The infructescence is conical, 5-10 cm long and formed by the imbricate carpels 3-5 cm long, woody, indehiscent, laterally compressed, and similar to samaras, with persistent winged style which favours its dispersion with the wind during the autumn and winter.

It reproduces by seed in autumn in sandy loam, with the first flowering usually happening starting from the tenth year of age; particular care is to be done in the transplants due to the delicate rooting apparatus.

Fast growing species, imposing, of great ornamental value, in particular for the foliage, seen that the flowers, produced at the extremity of the highest branches, are poorly visible, cultivable in full sun or slight shade in an ample variety of climates, from the humid subtropical to the continental, where it can resist up to about -28 °C, but avoiding those with long drought periods, unless doing regular irrigations, especially in the juvenile stage.

Due to the dimensions it reaches in short time, it is suitable for great parks and gardens, as shade tree or isolated specimen, far away from dwellings in order to appreciate it at the best, and also due to the rather aggressive rooting apparatus.

It can be cultivated in an ample variety of soils, with preference to the slightly acidic ones, provided deep and rich of humus, perfectly draining and kept humid.

The branches are rather frail and can get damaged by the wind or by the weight of the snow. Besides its ornamental characteristics, it is a tree appreciated for the production of the wood, thanks also to the particular velocity of growth, presenting light, tender, of almost white colour, easy to work, utilizable in the constructions, for furniture, parts of boats, plywood and in the fabrication of paper. All parts of the plant are slightly toxic; the bark of the trunk and of the roots is utilized since the old times in the traditional medicine. Some varieties are present in cultivation, among the most appreciated stands the ’Aureomarginata’, with leaves variegated of cream yellow at the edges, and the ’Fastigiata’, with thin and slender appearance and more contained dimensions.

→ To appreciate the biodiversity within MAGNOLIACEAE family please click here.