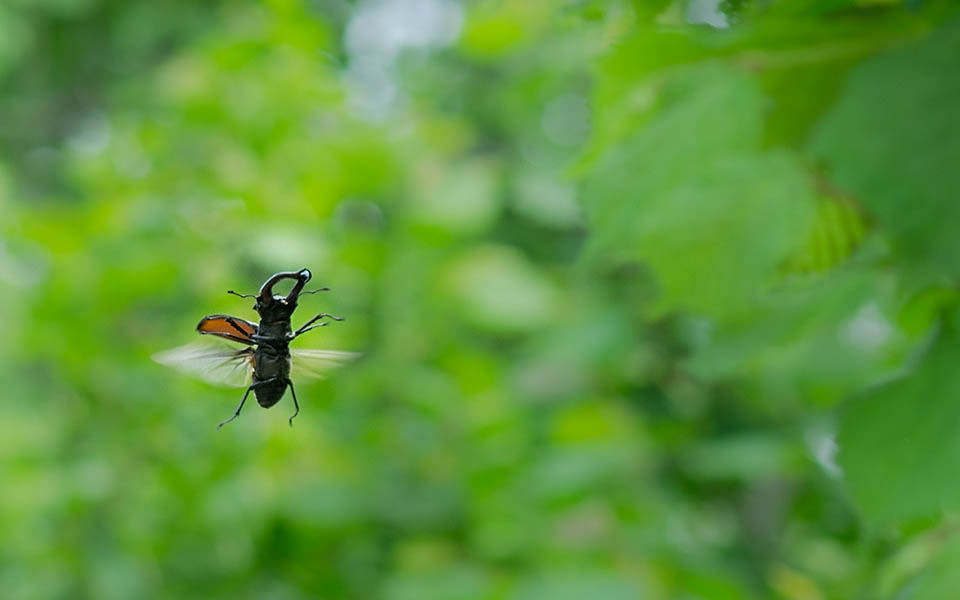 The European stag beetle, Lucanus cervus (Linnaeus, 1758), is the biggest European coleopteran. It belongs to the Lucanids (Lucanidae) and its scientific name Lucanus quite probably means “inhabitant of the woods” (from the Latin lucus: wood), whilst the specific epithet cervus refers to the very developed mandibles of the males, that remind the ramified antlers of a deer.

Lucanus cervus is one of the so-called “flagship species” for the environment conservation at European level, so much to be inserted in the Annex II of the Habitat Directive (Directive 92/43/EEC  dated May 21, 1992), concerning the conservation of natural habitat and of the wild species of flora and fauna. Also several Regional Laws protect the European stag beetle in Italy. 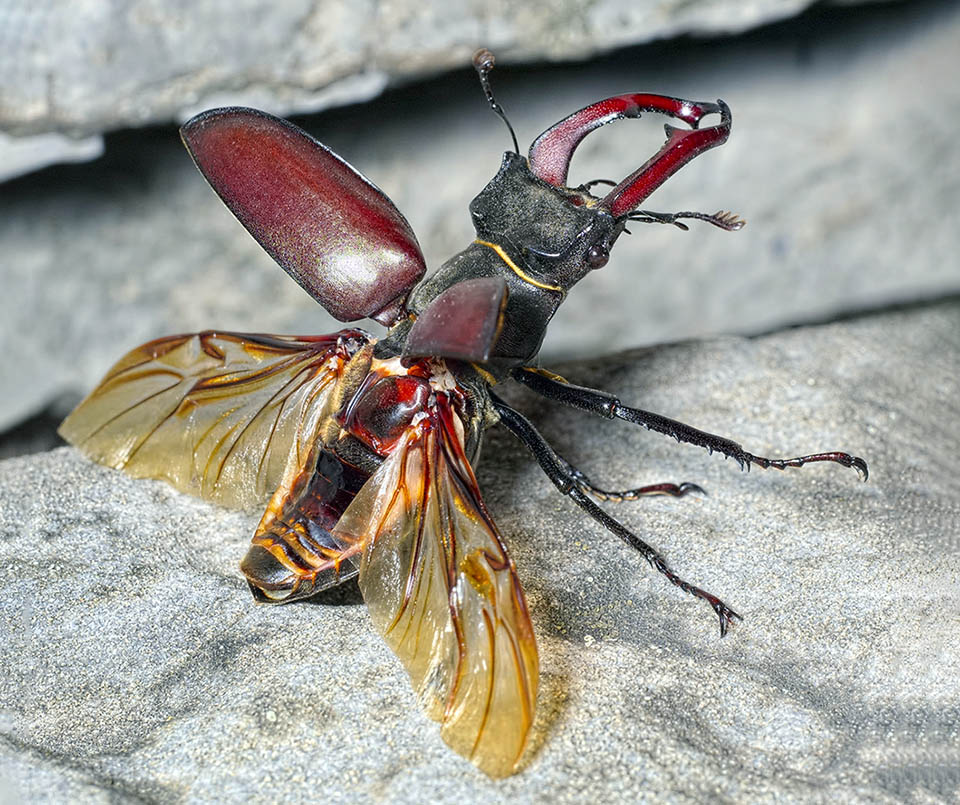 A just landed male. It is rarer to see the females flying, because, usually, they move by changing position on the ground © Pierre Bornand

The family Lucanidae counts more than 1700 species in the world; the genus Lucanus includes more than 120 species distributed in the boreal hemisphere, from North America to China, and in South-East Asia. The diffusion centre of the family is, rightly, south-eastern Asia, where the greatest number of species do live.

In Europe lives a rather limited number of species of lucanids (about fifteen), of which the most known and diffused is, without any doubt, the Lucanus cervus. 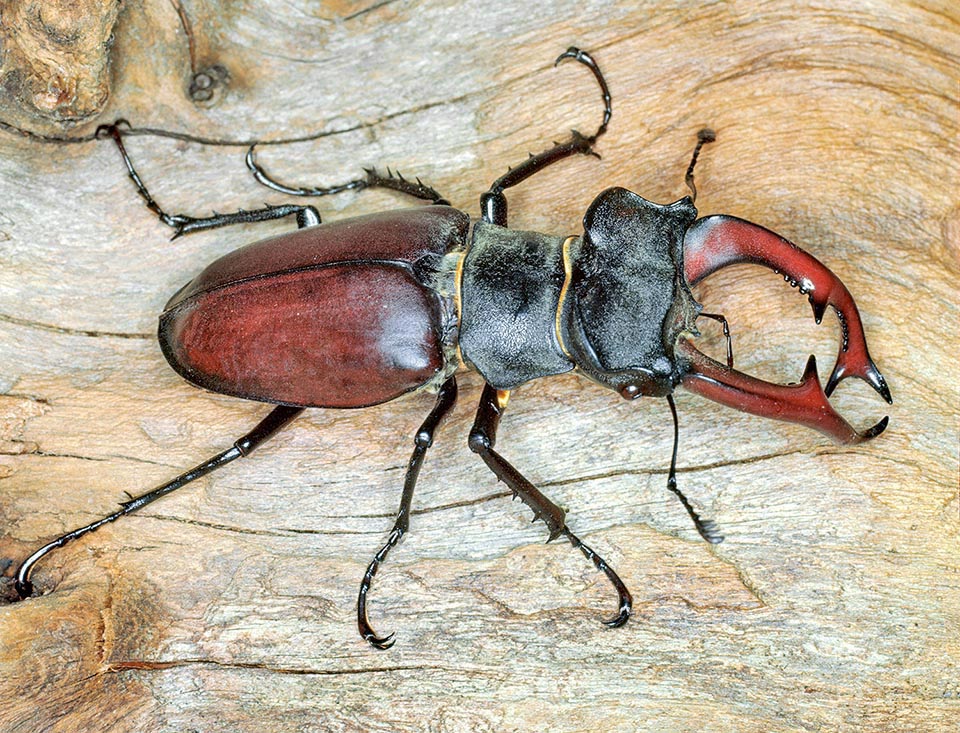 There is a strong sexual dimorphism: the typical deer antlers mandibles are present only in the males, the biggest specimens reach the 9 cm of length © Giuseppe Mazza

In the south of France can be found two more species, belonging to the genus, namely: Lucanus tetraodon provincialis and Lucanus pontbrianti, this last described by Mulsant already in 1839, but whose validity has been recognized and confirmed only in recent years.

The European stag beetle lives in the broad-leaves woods, especially in the plain ones and up to medium altitudes, preferring the mature woods of oak, chestnut and beech. 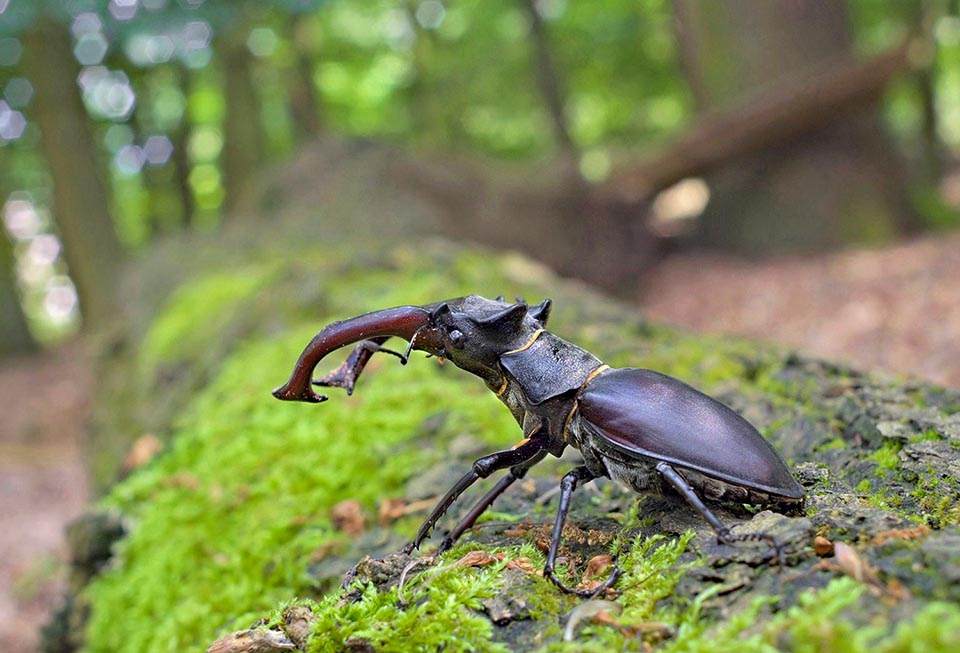 The very variable dimensions depend on the larva development, linked to the food availability, humidity and the soil temperature © Horst Beutler

One of the most remarkable characteristics of the European stag beetle (and of other lucanids) is the sexual dimorphism, that is, the considerable difference of the morphological look between males and females. As a matter of fact, the typical large mandibles are present only in the male individuals, whilst the females have them small and acuminate. The males are also bigger, have larger and slender legs, as well as the much bigger head, as the same must contain the strong muscles of the mandibles.

Another peculiarity of the European stag beetle stands in the great variability of size among the individuals belonging to the same population. 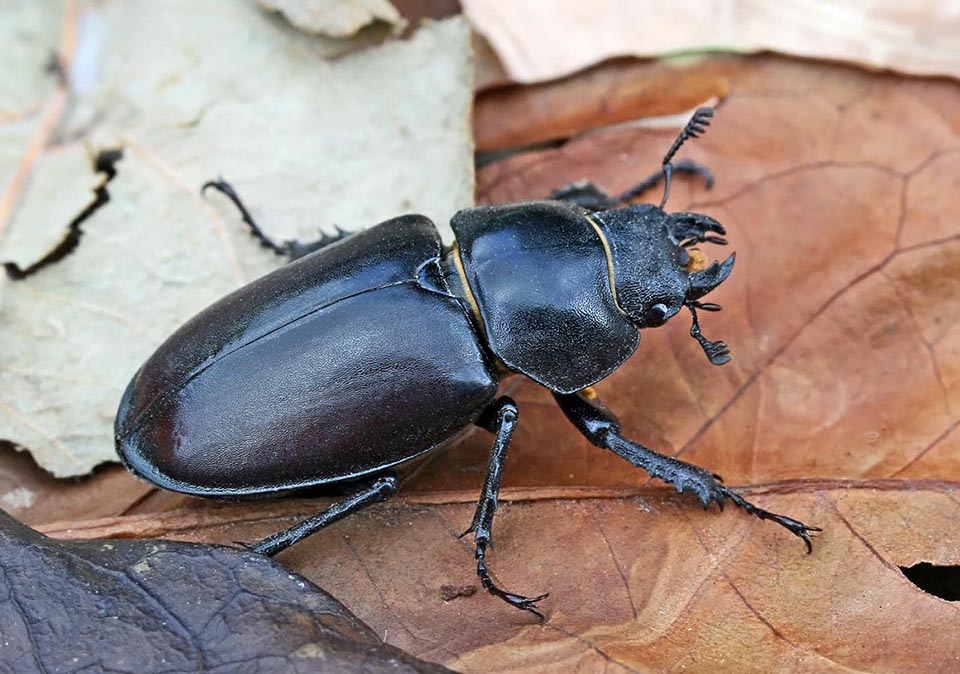 In return, the females have small and acuminate mandibles, so much to hurt if they are carelessly grasped © Claude Galand

There may be males reaching the 9 cm of length and, conversely, others that do not exceed the 4 or 5 cm. Also the mandibles are much more reduced in the small specimens, in respect to those of the big ones. This is due to the different development of the larva, depending on the food availability, the humidity, and the temperature.

The conformation of the antennas is another peculiarity of the family. In the lucanids, they are formed by a first very long article, followed by other short ones, to then end in a “comb”, usually of 3-4 more or less lamellate articles. Unlike the other Scarabaeoidea, these articles are however not mobile and foldable one on top of the other, but fixed. 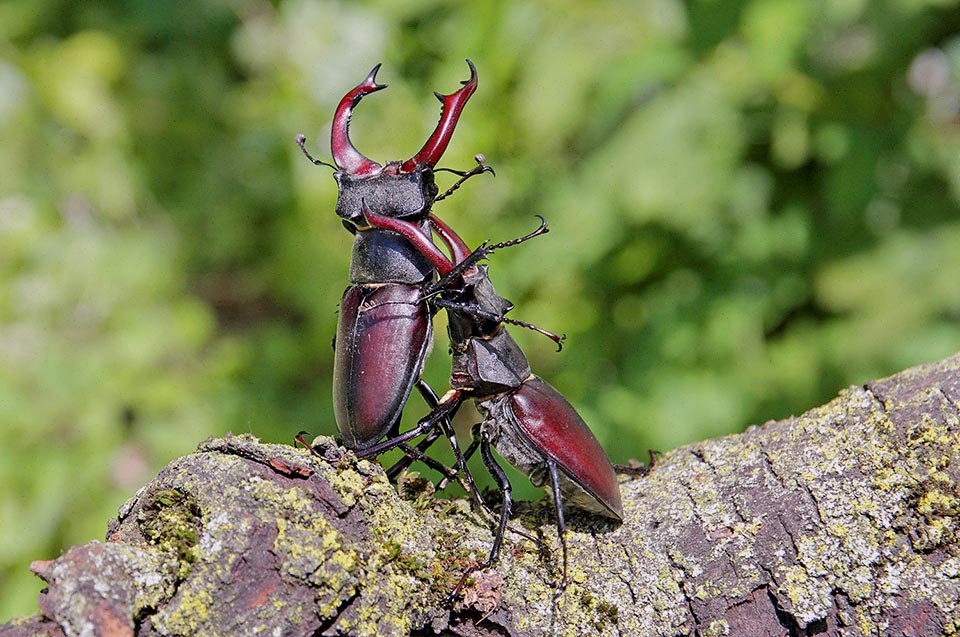 The big horns of the males are not done to hurt, as it could be thought at first sight, but to grasp and to make rivals in love to fall from the branches. Once the field is free from other pretenders, then serve, folded to touch the branch in front of the female head, to imprison it, immobilizing it for the whole mating duration © Heinz Rothacher

The adults of Lucanus cervus have short life and can be observed in summer, normally between June and August.

Due to the considerable size of the males, their flight does not go unnoticed and usually they can be seen at the sunset. More difficult it is to see the females, as usually they move by changing position on the ground and fly rarely. 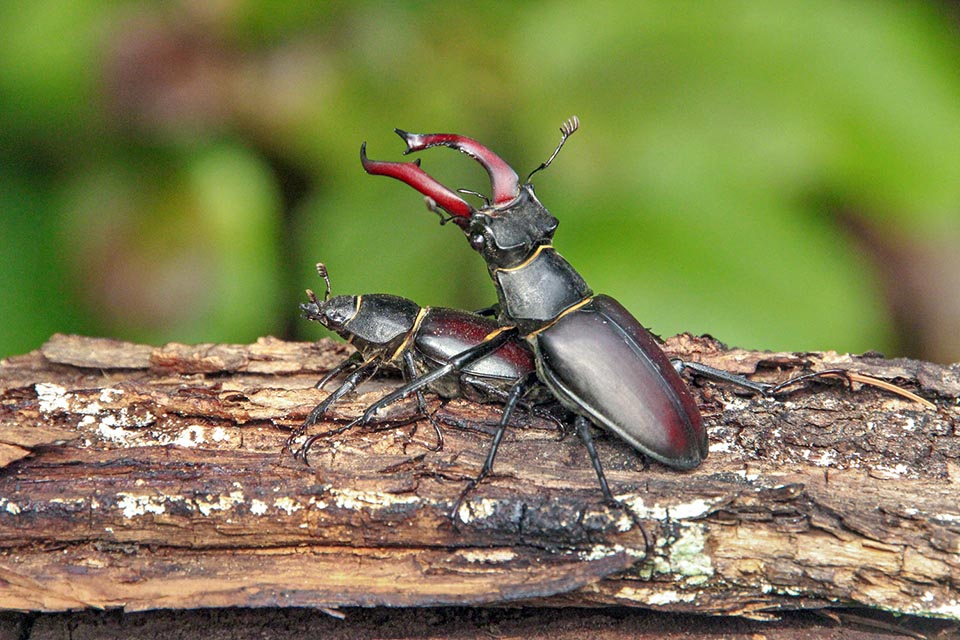 Foreplays. The big and strong males are not always favoured, as while fighting, the small ones can defeat them furtively, reaching rapidly the female first © Heinz Rothacher

The so developed mandibles of the males mainly serve to fight each other to get the possibility of coupling with the females.

The males try to grab the competitor to be able to knock it off the trunk or the branch where they stand. Conversely, the bigger and stronger males are favoured in fighting, but the smaller ones try to take advantage of their major agility and speed for reaching the females first. 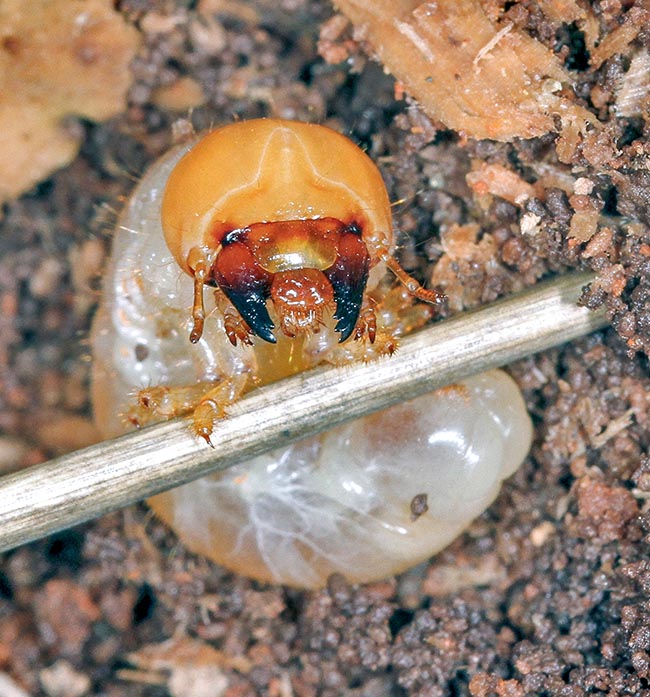 After mating the female of Lucanus cervus digs the soil close to the chosen tree, up to a depth of 70-100 cm, to lay the eggs close to the roots of the plant. Here, a big larva at work with its greedy mandibles © Philippe Garcelon

The huge deer antlers mandibles  serve also for blocking the female while mating.

After mating, the female digs a hole in the ground close to the chosen tree, up to a depth of 70-100 cm and lays the eggs near the roots of the plant.

They live in the decaying wood, on the ground, and develop in two-three years.

The pupation takes place on the ground close to the stump or the trunk where the larva has developed.

The larva builds up a “cocoon” of soil and pebbles, at the depth of 15 to 50 cm and here occurs the metamorphosis.

The adult European stag beetles are preyed by various birds, like, for instance, the crows and the jays, and also by mammals, such as foxes and mustelids; conversely, the larvae may be devoured by wild boars when these ones are digging in the soil at the base of the trees.