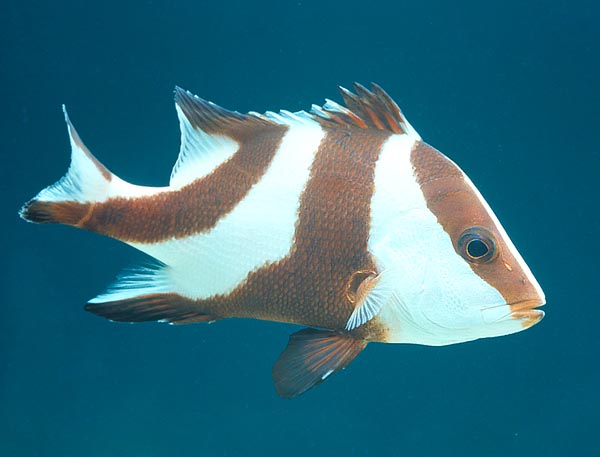 The members of the family of the Lutjanids (Lutjanidae) include a score of genera of tropical marine fishes, to which correspond numerous species, however totally absent in the Mediterranean basin, as endemic species, even if, as it happens for other fish species, a form of Lessepsian migration is taking place, connected to the increase of temperature of the waters of our seas.

One of the species, afferent to this family, most known because much commercialized in the context of the ornamental aquariophily is the Bourgeois red snapper, also called Bourgeois fish (Lutjanus sebae Cuvier, 1816), or called Emperor red snapper.

The “Snappers”, that is, biters, are nowadays in fashion and represent a very much commercialized group of marine tropical fishes.

The taxonomy tells us that it is afferent to the group of Fishes (Pisces), class of the Osteichthyes (Osteichthyes), subclass of the Actinopterygians (Actinopterygii), order of Perciforms (Perciformes), suborder of the Percoids (Percoidei), family of the Lutjanids (Lutjanidae) and genus (Lutjanus).

All members of this family are quite common in the Indian and Pacific Oceans waters. They are absent on the Mediterranean basin as original species, but there is instead present a “Lessepsian” family, which we shall cite in the course of this text.

The Bourgeois fish, or Bourgeois red snapper (Lutjanus sebae) is often put up for sale in the Japanese markets, where it is called, by the fishermen, “semedai”.

This fish is perhaps the most famous of the genus and is actively fished due to the goodness and value of its flesh, besides the aquariophily trade. It mainly lives close the coral reefs and the rocky reefs, where it appreciates the presence of sandy, pebbly and flat bottoms.

The juvenile forms, which do not measure more than 20 cm, love the murky waters, the mangrove areas, or the waters close to the shoreline. It is not rare to observe the sub-adult forms swimming among the sharp spines of the sea urchins, of which they may be commensals. The adult forms, like other species of medium-sized tropical fishes, during the winter tend to live offshore in deeper waters.

The general lines of the lutjanids are common between the numerous species; all the members do have a robust body, not too compressed on the sides and covered by normally tiny and ctenoid scales; the dorsal fin is unique, even if neatly divided into two parts, both sustained by inclinable rays; the caudal fin is truncated and also partially bifid; finally, the head of these fishes is relatively big and has a quite wide buccal opening; the teeth are sharp and pointed, thus leading to think, especially those positioned more anteriorly, to the typical canines.

On the contrary, the swim bladder is little developed, as well as the digestive tract, which indicates us carnivorous type nutrition. 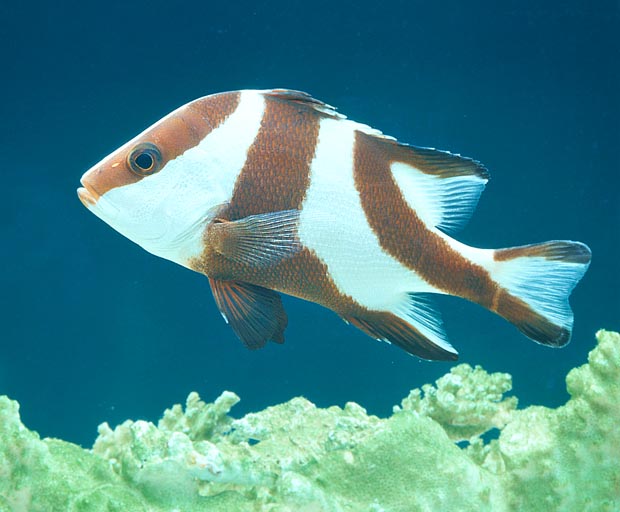 For us an aquarium fish, but it's present in the fish markets for the quality flesh and the big size © G. Mazza

The dimensions are very different, as there are many of them of a modest size, but also there are some species of remarkable size, like the emperor red snapper.

The name of Snappers, that is, of biters, makes us guess their predatory habits; as matter of fact, they nourish of fishes, crabs, Stomatopods (Stomatopoda) that is, the mantis shrimps, as well as of other species of crustaceans and benthic cephalopods.

In the specific of the Lutjanus sebae, the body is somewhat more laterally compressed, tapered at the rear to form a well developed caudal peduncle; the head, quite big, has no scales and carries big eyes and a mouth equipped with a huge number of very sharp small teeth, placed very thickly.

The dorsal fin of the Bourgeois red snapper, on the other hand, runs almost from the nape up to the tail, and is supported in the fore part by hard rays and in the rear by tender ones.

The livery is very beautiful, on the basic colouration, whitish or reddish, three dark stripes are evident, the of which the first interests the head and surrounds the eye; the second crosses obliquely the trunk, colouring most of the belly and the pectoral fins, whilst the third one, after having bordered the back edge of the dorsal fin, heads towards the tail extending to the posterior lobe of this last.

The red snapper is probably the most common member of the genus and is also the biggest species; even if in the Japanese markets, as briefly said before, they sell specimens of no more than 30 cm of length, in the nature they catch also some of them measuring three fourths of a meter, and more.

There is no somatic sexual dimorphism between male and female.

Other species, much used in aquariophily and present in the Pacific Ocean, are the Bluestripe snapper (Lutjanus kasmira), with the body with horizontal stripes with neat edges, then there is the Mangrove red snapper (Lutjanus argentimaculatus) which is a “Lessepsian” species (we remind that the Lessepsian migration is the entrance and the stabilization of animal and vegetal species from the Red Sea to the Mediterranean through the Suez Canal, please see text of the Siganus vulpinus), the Bohar snapper (Lutjanus bohar), the Dory snapper (Lutjanus fulviflamma), all typical of the South Seas; and finally, the Dog snapper (Lutjanus jocu), diffused in the tropical belt f the Atlantic Ocean.

They live either in small isolated crowds or solitary. They are fairly gentle fishes, but the may, however, get upset in the case their vital space is reduced, they swim little and for short distances. They are oviparous and the female lays the eggs in layers; they do not reproduce in captivity, in nature, the reproductive habits are still unknown. The IUCN, for the time being, does not insert it among the endangered fish species.

The vulnerability index of this species is of 59 over 100.