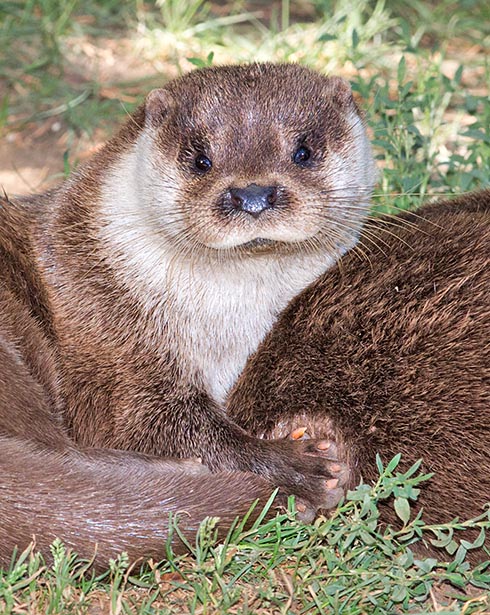 The term indicating the genus and the species “lutra” comes from the Latin and simply means “otter”.

The geographic distribution of the European otter interests the palearctic region as well as the oriental one including portions of three continents: Europe, Asia and Africa. It is present in most of Europe (but in the Mediterranean islands and in Iceland) and in most of Asia, including Japan and Indomalaya, excepting the northernmost territories north to the Polar circle.

It is also diffused in Asia Minor and Palestine, North Africa, in Morocco and Algeria. The various zones of its original range appear in worrying decrease as a consequence of the negative anthropic effects. In Europe, for instance, the species is relatively present only in some parts of Scandinavia, Scotland, Spain and East Europe; in Italy, France, Germany is present with residual and isolated populations, in the remaining regions is in decline or has disappeared.

The European otter is closely linked to the aquatic habitat and lives close to rivers, streams, creeks, swamps, lagoons, estuaries and river mouths, lakes up to even more than 2000 metres of altitude. The waters where it lives must be rich of fish and must have the surrounding zones (banks, shores) covered by abundant vegetation offering protection and possibility of shelter. At times it goes into the sea for reaching the islands close to the coast. Usually it never gets much far away from the water, and only temporarily, unless it has to move from one fluvial system to another. It prefers untouched, solitary and wild natural environments; as a matter of fact, it’s a species very much sensitive to the disturbances due to the human activities and settlements. Even if it can frequent different habitats, the presence of the European otter is linked to the vegetation of the banks, and for its reproduction, to the presence of holes or cavities on the banks or among the roots of the trees. 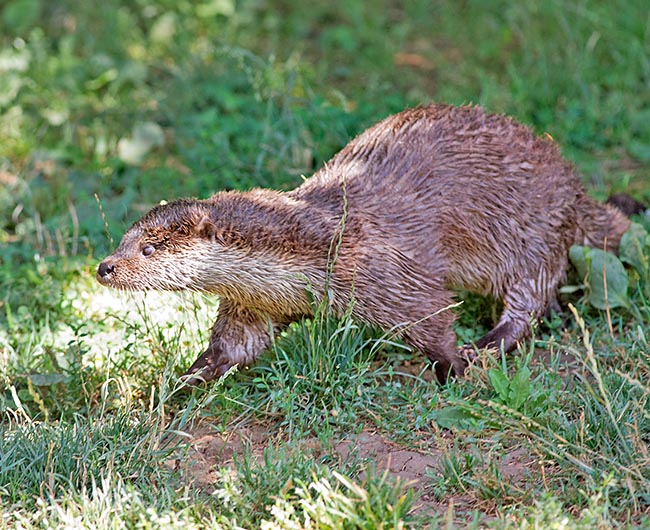 The European otters, like all otters, are carnivores adapted for the life in aquatic ambient; their morphology differs significantly from that of the other mustelids.

The general structure of the body is hydrodynamic, with wide and roundish head, flat muzzle, short neck, cylindrical and elongated trunk, short limbs. It may reach the length, tail included, of 120 cm and a weight varying from 6 and 15 kg.

The pinnae are rounded, small and almost totally hidden by the hair. The auditory meatus is provided of three lobes, similar to valves, which, when immersed, prevent the entry of the water.

The eyes are somewhat small, with round pupil, and are equipped with a mechanism of adjustment of the crystalline allowing the animal to see well also underwater.

The rigid vibrissae are very long and allow the otter to feel the presence of preys also in the turbid waters and in the dark when it cannot localize them with the sight and cannot utilize the olfaction having the nostrils closed. The tail robust and well muscled, is long more than a half of the length head-tail, and has a greater diameter at the base tapering gradually towards the point. The fore feet are longer than the hind ones; they are wide and provided of 5 short fingers, united by a glabrous membrane extending up to the base of the distal phalanges. The nails, not retractable, short and strong, are more developed in the fore limbs. The plantar and palmar surfaces have a long callosity not covered by hairs. The female has three pairs of teats.

The fur is formed by 20-25 mm long kemp and by thick down, whose hairs measure 10-15 mm. The function of the fur in the mammals usually consists in holding a layer of air which, by isolating the body, hinders the dispersion of the heat. In water, the function of thermal insulation goes lost therefore in the otter, like other similar species, the dispersion of heat is prevented by means of the secretion of the sebaceous glands placed close to the hair follicles, secretion which renders the hair hydro-repellent.

The body structure is totally hydrodynamic, with wide and roundish head, flat muzzle, short neck, long cylindrical trunk and short limbs. It can reach, tail included, 120 cm of length, with 6-15 kg of weight. Small ears closing in immersion and huge vibrissae for localizing the fishes, which are the main dish, also in very turbid waters or in the dark, when the sight doesn't help and olfaction is inhibited due to the closed nostrils © Giuseppe Mazza

When the animal is immersed in water, the outer layer of the kemp gets wet and the hairs intertwine forming a smooth and waterproof surface protecting the thick and morbid down where the insulating layer of air is held. In this way, the skin does not get wet and the body keeps thermoregulated even if the animal stays in water for long time.

The upper parts of the body, the limbs, the feet and the tail are brown or dark brown, with greyish reflections on the back and the sides whilst the lowest parts have a paler tonality, tending whitish-fawn or cream, in particular at the level of the throat. The upper lip, the cheeks and the throat are more or less whitish and the ears are edged with light brown. In winter, the fur gets darker tonalities. There is no evident sexual dimorphism even if the female is generally smaller and has lighter tonalities of the fur. 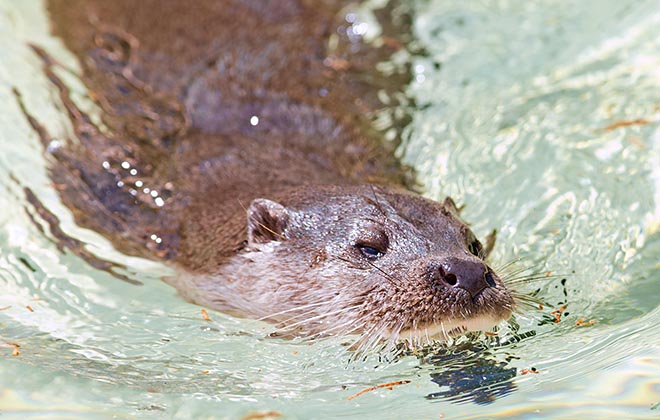 Never goes far from water but is an excellent swimmer, also at sea © Giuseppe Mazza

The European otter is very elusive and carries on a solitary life (the adults may live together only during the reproduction period) or in family group (mother with progeny), is an excellent swimmer and its life s linked to the good quality water streams.

It has diurnal habits in the wild and crepuscular and nocturnal where an anthropic disturbance is present; though the activity periods may vary also on relation to the seasons and the habitats where they live.

The footprint is recognizable due to its rounded shape, where are evident the prints of the pads of the fingers and those of the nails, relatively spaced from those of the plantar pad. Among the pads is at times visible also the print of the inter-digital membrane. When the otter walks slowly the prints of the hind feet overlap those of the fore ones and consequently the trace results composed by two juxtaposed prints placed obliquely; when it moves trotting, on the contrary, the prints do not overlap and trace is formed by 4 prints.

In fast gallop the prints are arranged obliquely one close to the other but it may happen that those of the hind feet, almost paired, precede the fore feet ones, which are one behind the other. Although not very agile on the ground, this mustelid is able to do long leaps and to climb on trunks and inclined branches. 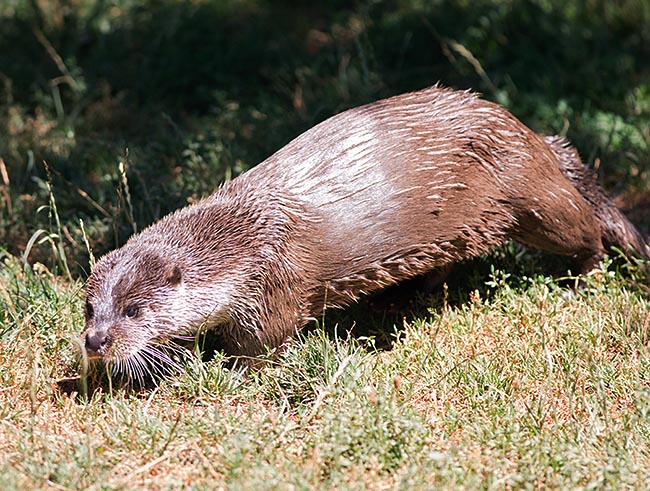 When immersed, the outer layer of the kemp gets wet and the hairs intertwine forming a smooth, waterproof surface, protecting the thick morbid down with the precious pad of isolating air © Giuseppe Mazza

In water, the common otter is extraordinarily agile and adroit showing all its exuberant vitality. It swims very fast in immersion keeping the fore legs adherent to the body and giving the propulsive boost mainly with oscillations of the trunk and of the tail, as well as with the wide hind legs, which together with the tail, act as direction and depth rudders.

When swimming under the water surface, emerges with part of the head, of the back and of the tail.

It frequently swims on the back or on a side and rotates around its own longitudinal axis; it also swims “butterfly” in order to develop a bigger speed.

These ways of swimming and moving render the European otter a very nice animal to the observer.

The diet is formed almost exclusively by fish (more than the 80% of the diet) belonging mainly to the family of the Cyprinids (Cyprinidae); it nourishes also of crustaceans and other invertebrates and occasionally of aquatic birds or other small animals. Its swimming adroitness is such to allow it to effect rapid changes and inversions of direction in a very short space, competing and often overcoming the fish’s ability. It may stay immersed for 7-8 minutes reaching a depth of 9-10 metres. It has eyes, nostrils and ears placed at the same height thus permitting to keep, unseen, at the water surface.

The dens are usually located on the banks and shores of the water streams, rarely may utilize abandoned dens of other mammals such as foxes (Vulpes vulpes) or badgers (Meles meles). Even if mainly mating in February-March, the period may also vary thus having newborns in almost all seasons. 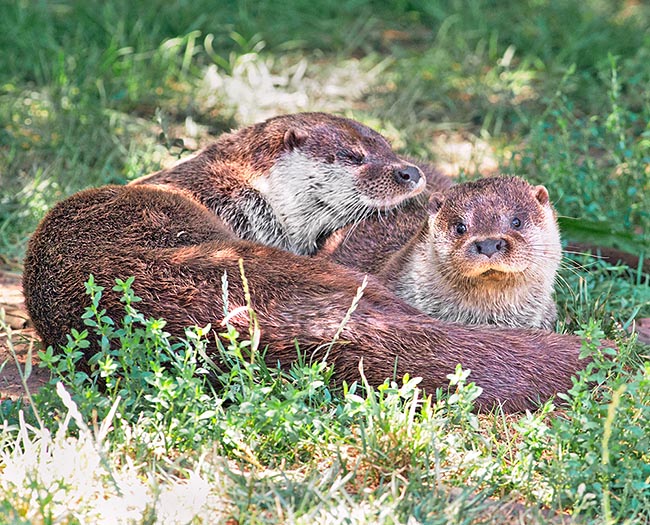 The gestation lasts little more than 2 months (63-65 days) and as an average 2-4 pups are delivered. The sexual maturity is achieved between the 18 and the 24 months (males are more precocious).

This species is very sensitive to the pollution, is considered endangered due to the fast decline of the population happened during the last years, and its presence has become synonym of habitat integrity.

The aquatic habitats suitable for hosting this species are extremely vulnerable due to the artificial actions done by the man such as: the channelling of rivers, the cutting and the removal of the vegetation growing on the banks of the water ways, the construction of barriers and dams, the drainage and the reclaiming of wetlands, the activities of aquaculture, etc…

The rarefaction of the European otter is to be mainly ascribed to the destruction of the original habitat, to the anthropization, the pollution and the hunting and poaching done due to its valuable fur.

Presently the species is protected in many countries of its range and is inserted into the appendix I of the CITES. Various programmes of monitoring and of reintroduction have been started in Europe. The consistency of the European otter is not known in many areas of its distribution range, particularly in Asia and Africa. The European otter has a life expectancy of about 16-18 years.

Viverra lutra Linnaeus, 1758; Lutra nippon Imaizumi & Yoshiyuki, 1989 (the Japanese otters were, as extinct in the early nineties, considered by Imaizumi & Yoshiyuki as belonging to a species unto itself, but this classification has not been confirmed and accepted officially).