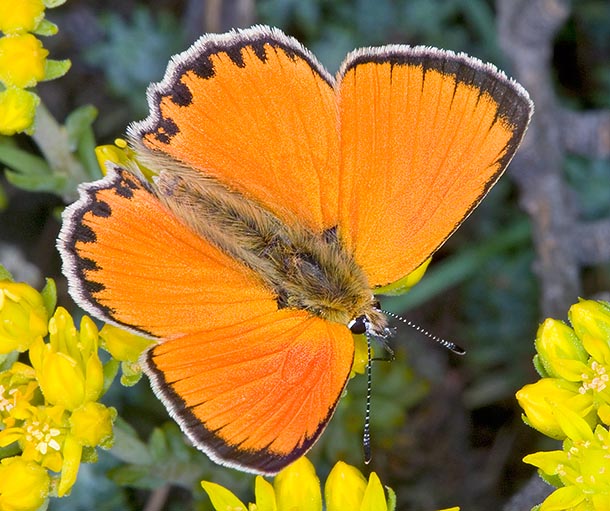 A sparkling tropical butterfly? Not at all, the Lycaena virgaureae lives in temperate Europe up to China © Giuseppe Mazza

As often happens in the naturalistic nomenclature, the scientific binomen given to the single species is frequently coming from erroneous personal evaulations of those who have classified it or from misinterpreted information that have led to give epithets and nicknames absolutely not inherent to the characteristics of the species.

It is the case to say that for the Scarce copper (Lycaena virgaureae Linnaeus, 1758) this interpretation is a consequence of these facts.

This beautiful butterfly belongs to the order of the Lepidoptera, to the family of the Lycaenidae and is characterized by a brilliant and spectacular colouration if it were not for its small dimensions that often render it little observable.

In fact, Linnaeus did rightly classify it as species virgaureae, the Latin name of the European goldenrod (Solidago virgaurea) a flowering grass common in Europe and with which this butterfly perhaps seemed to be strictly linked.

Actually, this pairing has later on revealed incorrect as this essence does not enter any way the life of this lepidopteron.

In the same error did fall the first English entomologists who gave it the vulgar name of Scarce copper (Rare copper) confusing it with the alike Large copper (Lycaena dispar) this one actually and not so common to totally disappear from England during the XIX century. Conversely, the Lycaena virgaureae is not by sure the rarest in its genus in Europe.

On the contrary, the genus Lycaena comes from the Greek and also has pretty vague interpretations. Some do claim that it has originated from Lycia, other name of the goddess Diana, others from lukaina = she-wolf, others from Lukaios or Lycaeus or Lyceus, epithets given to some divinities worshipped on the Lycaeum mountain in old Arcadia. 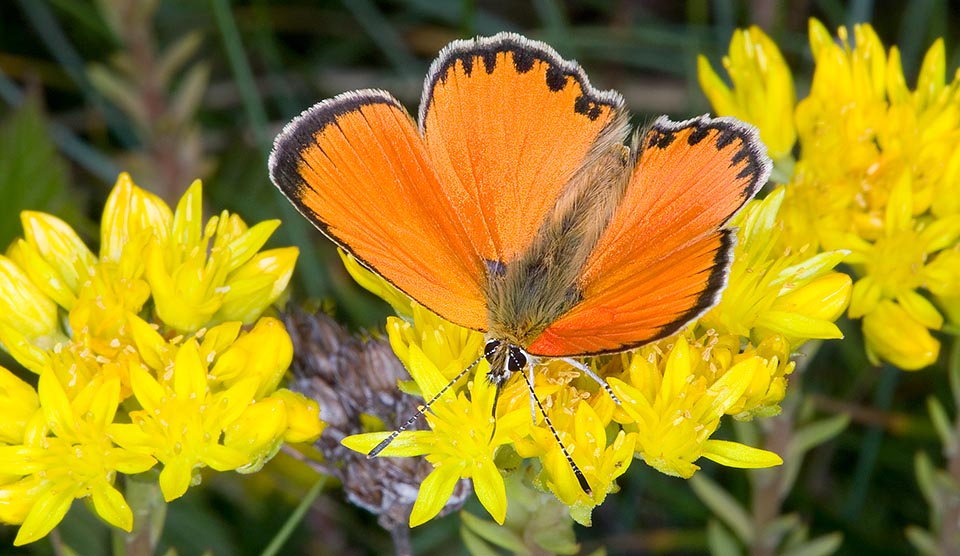 Almost invible in its fast flight, measures at most 35 mm, but when resting, with the half-open wings, the male is really spectacular © Giuseppe Mazza

And still others from Lykaon, King of Arcadia, or from Lukeion, an old Athens gymnastics school where the evolutions of the jugglers seemed to imitate the frantic flight of these butterflies. Lastly, the most imaginative, the one that puts into relation that deemed as the “scientific geniality” with a profane rhymed repetition of the names used scientifically at that time and that have given thereafter the start to the most varied interpretations: Zygaena, Phalaena and Lycaena. Some common European names are Dukatenfalter in German, Cuivré de la verge-d’or or Cuivré satiné in French, Mariposa manto de oro in Spanish, Licena della verga d’oro or Licena del romice in Italian and Scarce copper in English.

The Scarce copper is typical to the temperate areas with a good diffusion in the European continent. As a matter of fact, in Europe is quite common and spread and is not so at risk as the congeneric Lycaena dispar nowadays totally extinct in various locations of the continent. 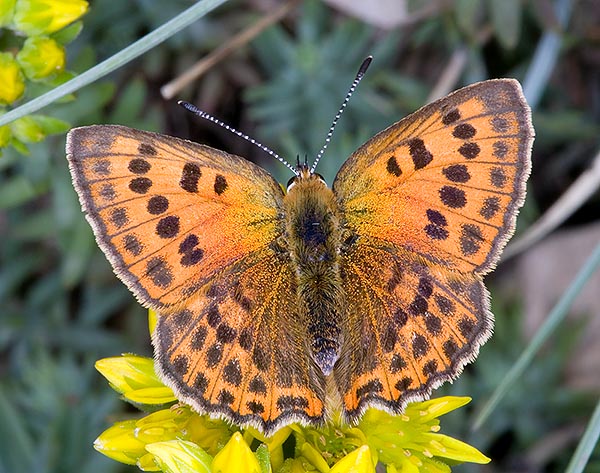 Conversely, the female, pale colours with spread spots, adopts a mimetic livery in the interest of species © Giuseppe Mazza

The species is found in the Iberian Peninsula, on the Pyrenees and on the French Central Massif, close to the Alps, in the Balkan Peninsula, in Turkey and up to Mongolia and the north of China, in one only restricted belt concentrated on the same latitudes.

In Europe, is missing in the north-estern part, in Holland, in Denmark and most of Belgium and in northern Scandinavia but is present in the southern part of the peninsula and in the Russian territory until joining at south to the above mentioned latitudes.

This lycaena mainly lives in pre-alpine or medium mountainous environment up to altitudes close to the 2000 m in Europe but even higher in the Asian continent. It loves flowered clearings on humid alpine meadows even if the preference stands for fairly steep and also dry lands. Essential for its presence are the half hill sunny hedges of flowers. Among the dozen of species grouped in Europe of this genus, this butterfly is probably the most diffused at medium-high altitudes where it is met in great quantity whilst is scarce and sometimes is missing under the 500 m. It has a fast and dashing flight not easy to be followed when flying. In fact, the bright colour of the upper alar surface, appears and disappears like a sudden flash during these evolutions, reappearing then in its splendour when resting on a flower with the wings spread to the sun.

The scarce copper is a very small butterfly with dimensions hardly reaching the 35 mm of wingspan. In spite of this, it can be considered, along with other conspecifics, one of the most coloured and surprising butterflies of our territory. 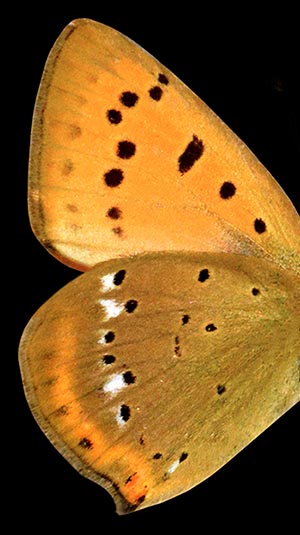 The lower face of the wings is the same for both sexes. Typical of the species is the copper red band below with the white drawings © G. Colombo

The colour of the upper face of the male’s wings is of a bright coppery orange that even dazzles if exposed to the rays of the sun. The reflections are so much shining that they stand out on any flower where they rest evidencing immediately its presence. The central surface of the wing is totally free from particular signs or spottings except for a blackish edging concentrated on the tips of the wings and on the sub-marginal area where it evidences also small lunulae at times much pronounced. On the inner apex of the wing stands a slight elongation that gives the appearance of a short and rudimentary tail.

Conversely, the female has more soft and ambered colours with spread spots that in the fore wing create two parallel lines on the sub-marginal belt whilst in the back one the dotting is immersed in a brown down covering the surface almost completely.

The lower face of the wings is determinant for the classification of this species. Both genera show a cinnamon colour on the upper wing with scattered black spots and an ochraceous yellow colouration in the lower one where do appear two or three small white drawings in the post-discal area. On the edge of the lower wing, the margin is in parallel accompanied by a quite characteristic copper red stripe.

The antennae, as usual for the lycaenids, are finely decorated in white black with apex of the club of pale colour.

This lycaena has several species much similar to each other that often render difficult its classification, even more if we are not able to observe clearly the lower alar surface. In fact, it may be easily mistaken with the Lycaena dispar, with the Heodes ottomanus, the Thersamonia thetis and also with the Chrysophanus (Palaeochrysophanes) hippothoe, except for the aforementioned drawings particularities.

A curiosity that comes as usual from the English lepidopterologists, is the vulgar classification that they do of the quite numerous species present in the family of the lycaenids. A coarse but effective subdivision that makes immediately clear to anyone of which genus of butterflies we are talking about without knowing in depth their specific classification.

The lycaenids have been divided into three groups: the Copper, the Blue and the Hairstreak. Clearly, seen their colour, the virgaureae, the dispar and the just quoted similar ones, are included in the Copper ones.

Among the copper, the scarce copper is one of the very few hibernating in the stage of egg, contrary to the others that spend the bad season at the larval stage. The eggs are laid on the stem of the host plants or of the nearby weeds and spend the winter among the rotting dry leaves on the soil. By the late spring wake up the caterpillars begin to grow fast till when they pupate in a few weeks on the host plants and give effect to the only annual generation. The butterfly takes flight in late summer (July/September), in the warmest months seen that its most suitable natural habitat is often located at discreet altitudes. 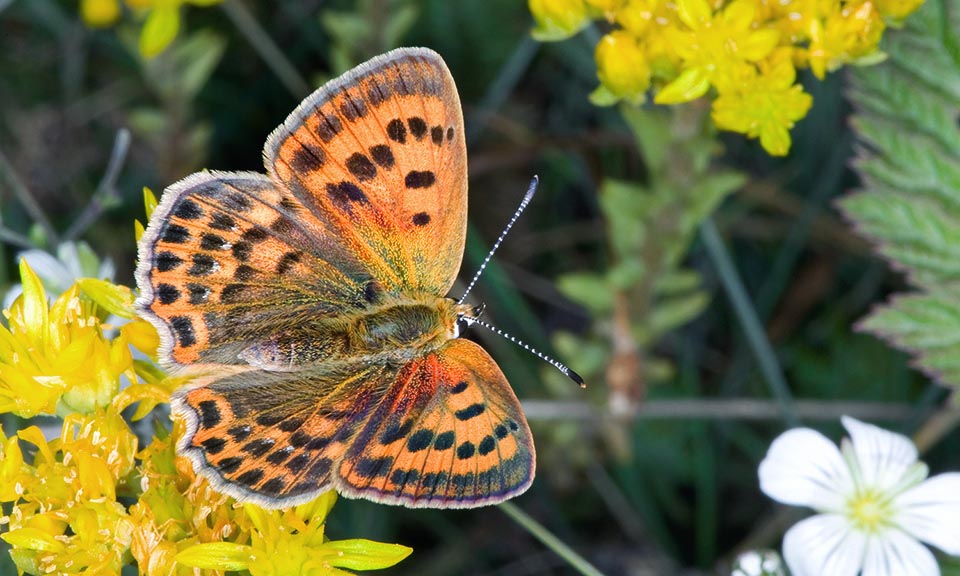 The Lycaena virgaureae lays eggs under the host plants leaves or close to them. Unlike to what happens for most of Lycaenidae, these do not open at once, do not transform immediately in larvae, but wait for spring, spending whole the winter in the cold, often even frozen, even at 2000 m of altitude © Giuseppe Mazza

Main host plant is the Rumex acetosa but also any other essence of the genus Rumex is accepted.
Irresistible for the feeding of the adults are the flowers of Eupatorium, of Valeriana, of Saxifraga, of Knautia, of Scabiosa and of Sanguisorba.

The butterfly is very active during the sunny hours in full summer and is seen wandering from flower to flower with very fast shots and sudden stops on the capitula of these flowers. When resting, it stays several minutes with the wings usually closed at 45°, during which it is easily observable and approachable, after that, with another dash, here it is moving to another flower and repeating the same behaviour. As often lycaenids do, also the Lycaena virgaureae during the night gathers in groups hanging upside down under these flowers.

It is an amply protected species but is not considered as endangered.