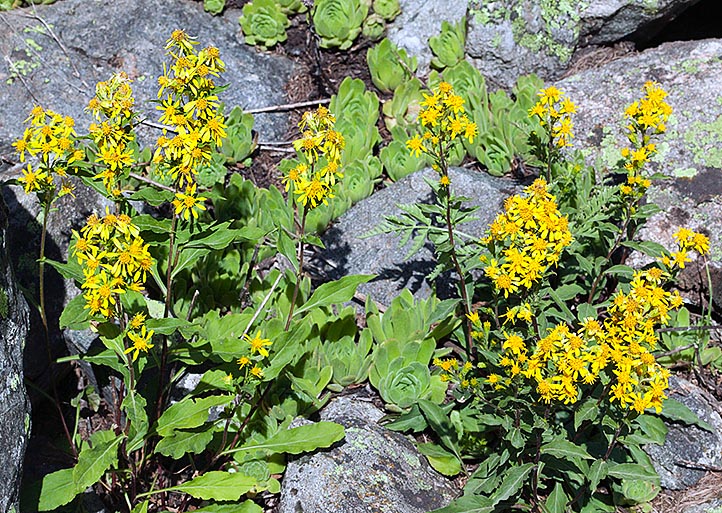 The European goldenrod (Solidago virgaurea L. 1753) is a species with Circumboreal distribution, that is, with a range extending in the cold and cold-temperate zones of Europe, Asia and North America.

The genus Solidago includes, after various authors, 80 to more than 100 species of north-eastern America, few ones of South America, of Europe and northern Asia.

The name of the genus comes from the Latin “solidus”, solid, healthy, and “agere” to render, make, and unite, therefore, to cicatrize cuts and consolidate fractures, or else from “solidare”, to join, due to the alleged properties of favouring the healing of the bones fractures.

The name of the species “virga aurea” means golden twig, golden rod, with reference to the showy golden yellow capitula. This species was known in the old times also as Judean grass, pagan grass or Saracens’ grass. Perennial herbaceous plant, 20-90 (100) cm tall, equipped with a short knotty rhizome, oblique, brown-reddish and erect stem, rigid, glabrous or little pubescent and streaked above. Lower leaves with 5-8 cm long, winged, petiole and oblanceolate or obovate lamina, glabrous above and usually pubescent below, of 2-3 x 7-9 cm (more developed in those of the basal sterile rosettes), sharp, with indented margin, decreasing upwards, with lanceolate to lanceolate-linear shape, alternated.

Yellow flowers merged in capitula on 1-3 mm pubescent peduncles, cylindrical involucre with 6-8 mm scales, carried in thyrsoid or panicle inflorescence. The flowering takes place from July up to October and pollination is done by the insects (entomogamous). The fruits are cylindrically-shaped achenes, thinned at the ends, pubescent, costiform, of 3 mm, yellowish, surmounted by a pappus of simple hairs. It grows in the woods, thickets, grasslands, wild locations in siliceous soils as well as in calcareous ones, but prefers soils with neutral pH, of average fertility and moderately humid, from the plain up to the 2000 m of altitude. 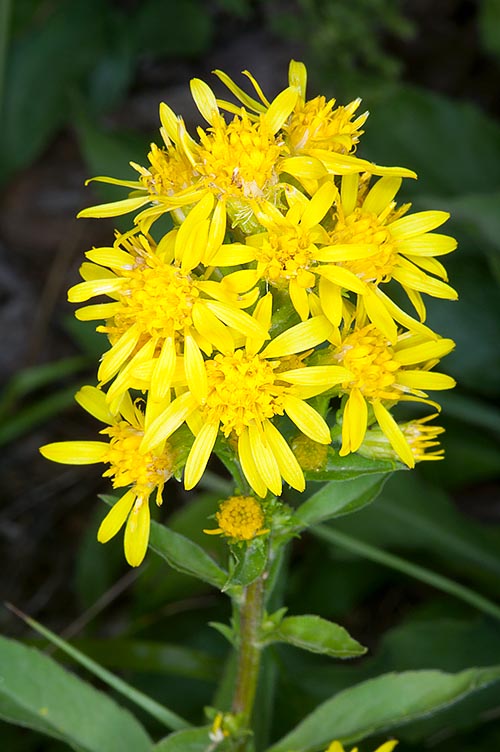 The goldenrod is a species known and appreciated since the old times as medicinal plant: old texts report that a famous Spanish physician, one Arnaldo de Villanueva referred of a person ailing from a “bladder stone” which, after having eaten a grass called “herba consolida sarracénica” with eggs for nine days, emitted a “handful of small stones”. Or: “The plant, cooked in the white wine, highly promotes the urination, breaks and dispels the stones, is good in all internal and external wounds”. It seems it was diffused as medicinal herb by the Arabs (Saracens) in the Middle Age: it was very much demanded for treating cuts, drunk in infusion or smeared as ointment. Where it was not available, it was imported and paid at a high price. Modern phytotherapy recommends to gather it in the period of flowering of the aerial parts of the plant (Herba Solidaginis virgaurae), and sometimes also the rhizome, especially to restore and improve kidney function, particularly in the acute nephrites with anuresis or oliguria.

The plant contains several active principles, particularly important are the flavonoids (about 1,4%), such as quercetin, quercitrin and isoquercetin, rutin, kempferol, astragalin, isorhamnetin; anthocyanidins, leiocarposide, virgaureoside, sugars, saponins, diterpenoids, essential oil, caffeic and chlorogenic acids, polysaccharides, catechinic tannins, resins and mucilages. The extracts haven besides a mild anti-inflammatory action, also a certain antifungal activity against fungi pathogenic for the man such as Candida albicans. It is a very valid plant also from the cosmetic point of view for rednesses of the skin with an action similar to that of the Calendula.

In homeopathy they use the tincture of fresh flowers against some kidney ailments, nephrolithiasis, gout and hypertrophy of the prostate. Due to its contents in bio-flavonoids with vitaminic activity P, the goldenrod can be used in the varicose syndromes in lieu of the extract of the Indian conker (Aesculus hippocastanum). The popular medicine assigns the goldenrod other properties, many of them, however, are not confirmed by clinical experimentations (anthelmintic, anticoagulant, antipyretic, expectorant, etc.). Presently, the countries where this plant is more cultivated, on small surfaces, are Hungary, former Yugoslav countries, Bulgaria and Poland.

Two spoonfuls of dried plant and 10 juniper berries in one litre of cold water, leave boiling for 2 minutes. Switch off and leave in infusion for 10 minutes more. To filter, sweeten and drink in two days keeping it in the fridge.

Leave macerating for 8 days 60 grams of flowered tops of dried goldenrod in good quality dry white wine and of at least 12 degrees, keeping in cool location and in the dark in a closed vessel, stirring occasionally. To filter squeezing well the residue and drink a small glass at the end of the meals.