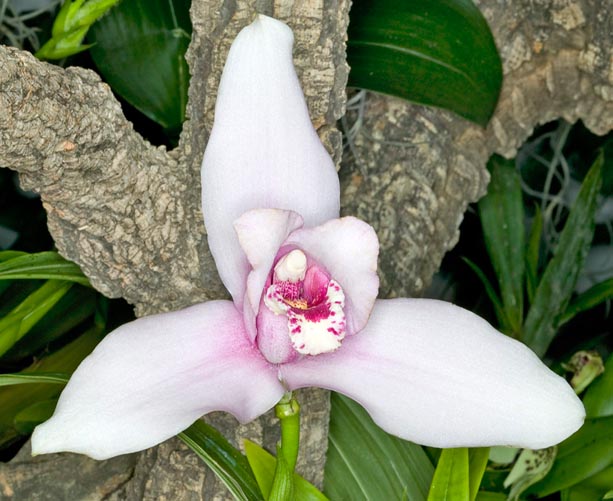 The Lycaste skinneri is an epiphyte with waxy flowers, even 14 cm broad, long lasting © Giuseppe Mazza

The species is native to El Salvador, Guatemala, Honduras and Mexico (Chiapas), where it grows in the humid forests between the 1500 and the 2000 metres of altitude.

The name of the genus is that of Priam’s, king of Troy, daughter; the species is honoured to its discoverer, George Ugo Skinner (1804-1867).

Erect inflorescence, from the base of the pseudobulb, developing at the same of the new leaves, 15-30 cm long carrying a single flower; each pseudobulb may generate more inflorescences.

Waxy flowers up to about 14 cm of diameter with white sepals more or less shaded of crimson at the base, violaceus pink petals and white labellum with violaceus red spots and stripes, long lasting, about one month. Oblong-lanceolate sepals of 5-7 cm of length and 3 cm of breadth, elliptic petals with bent apices, 3-5 cm long and 2,5-4 cm broad, projecting forward and wrapping the column, trilobate labellum, 4-5 cm long, pubescent, with erect lateral lobes and median ovate lobe with rounded and backward bent apex, arcuate column, pubescent in the lower part, 3 cm long.

It reproduces by seed, in vitro, and by division with each section provided of at least 3-4 pseudobulbs.

It is the most known and most cultivated species of the genus thanks to the beauty of its flowers and to its facility of cultivation; it requires high humidity, 60-80%, luminosity, but not direst sun, temperatures all over the year between 14 and 28 °C, even if it may stand some grade more or less for a short period, and a constant good ventilation.

The waterings must be regular and abundant when in full vegetation, reduced after the flowering, but with never allowing the substratum to dry up completely, paying particular care to avoid water stagnations between the leaves of the emerging vegetation, particularly sensitive to rottenness. For the waterings and the nebulisations, is to be utilized rain water, or water obtained by reverse osmosis or demineralised; the fertilizations, duly distributed and alternated, in way to avoid salts accumulations at the roots, are to be done during the vegetative period, preferably with hydro-soluble balanced products, with microelements, at ¼ of the dosage suggested on the package.

It can be mounted on bark, raft of cork or of arborescent ferns roots or cultivated in pots or baskets with much draining and aerated compost, which may be formed by medium sliced bark fragments, sphagnum or coir and agri-perlite. Movements and divisions are to be done by the time of the vegetative regrowth trying to cause the least possible damage to the rooting apparatus.

The wholly white form is the national flower of Guatemala.

There is a certain disagreement among the botanist about the name of the species, as some deem that the correct name should be Lycaste virginalis.