The Lynx lynx is identified at once due to the tufts of rigid hairs on the ears © G. Mazza

The European Lynx or, more precisely, the Eurasian Lynx (Lynx lynx Linnaeus, 1758), is a placentate mammal afferent to the order of the Carnivores (Carnivora), family of the Felids (Felidae).

Its oldest fossil remains date from the Middle-Upper Pleistocene. In Europe, along with the bear and the wolf, to which we have to add, in Russia, even if much rare, the Siberian tiger and the snow leopard, stands among the biggest wild carnivores.

In all the regions of Europe and central-northern Asia, the life of this splendid cat has always met difficulties, as, since thousands of years, it is subjected to the hunting attention of the man.

Initially, in primitive times, this was due to the flesh and the coat; later on because considered, like the wolf and the bear, a harmful animal for the tamed or the farm species (geese, turkeys, pheasants, chickens and lambs), not to forget all the complications and the issues connected with the continuous environmental deterioration of its biotope, with consequences on their reproductive biology, so much that in some geographic areas (for instance, in Italy, Spain, France), it had or has completely disappeared. In central Europe and in part of the northern one, since the times of the old Romans, the Lynx lynx was hunted for ludic purpose; a process which got more serious in the Middle Ages, when the hunting to the fox and the Eurasian lynx was one of the preferred hunting activities by the royalties and the nobles.

For decades, in Italy, together with many other autochthonous species of animals and plants, the European lynx has disappeared, although the biologists of several associations, among which WWF and IUCN, have tried various reintroduction processes, which have, almost all, aborted. Same thing has occurred in other European countries, wuch as Spain, France and southern Germany. But, luckily, in Italy as well as in France and Spain, it seems that during the last ten years we are assisting to a spontaneous return of this wonderful felid. 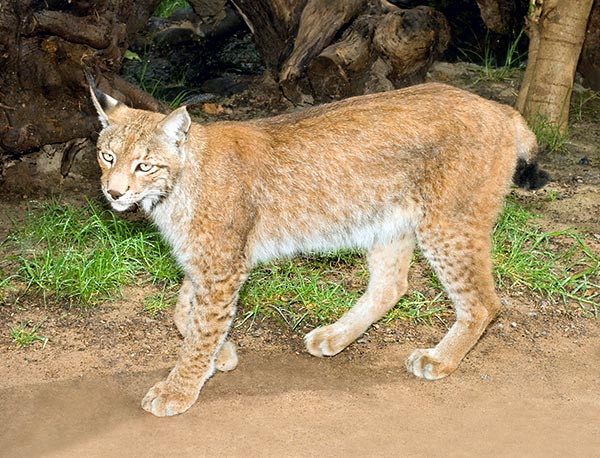 The body of the Eurasian lynx is short. The tail is stubby with black tip © Giuseppe Mazza

Several individuals have been sighted in the woody areas of the two sides (Spanish and French), of the Pyrenees, whilst in Italy the zoological biologists have observed them in the Eastern Alps and in the Gran Paradiso.

It is not easy for the fauna biologists to find convincing reasons which may explain these unpredicted and sudden arrivals.

It is maybe matter of natural expansions due to the depopulation of the mountain areas, expansions which, we have to say this, happen in the total indifference of the public and environmental organizations and despite poaching.

In fact, the biologists estimate that, on a population of 20 individuals, the Eurasian lynx loses one of them each year due to poaching, and considering its low biology and its reproductive frequency, there should be therefore a demographic decline or at least a major impediment to the growth of the populations.

The coming back of the Eurasian lynx in our territory as well as in other European geogra- phic areas, where this feline had disappeared, like other extinct animal species, is always happily welcomed by the zoological biologists. But the zoological biologist Prof. Bernardino Ragni of Perugia University, who, since years, is studying the phenomenon of the return and repopulation of the Lynx lynx, has invited the scientific community to a greater caution in evaluating these phenomena, and not only in Italy. 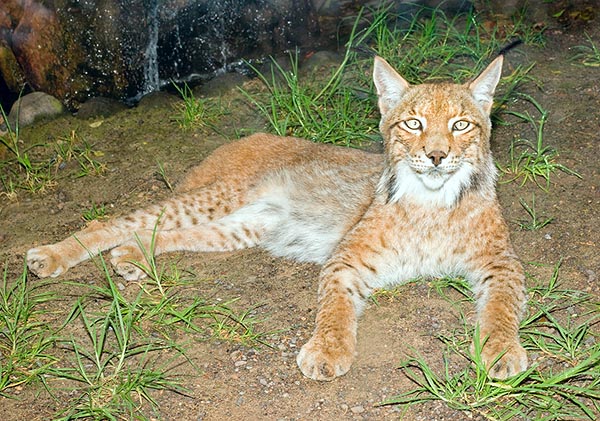 The Italian biologist has rightly asked himself what “race” of lynx is coming back; if it is that which lived in Italy before its extinction (by the beginning of the XX century), or if it’s another, which is replacing the original autochthonous one, nowadays disappeared for ever.

Prof. Bernardino Ragni has solved the problem by analyzing the drawing and the colour of the coat, which in the Lynx Lynx and in the various subspecies or races, is genetically controlled and characterized by three types: spotted, streaked and concolorous.

These researches have shown that, whilst the Lynx lynx which had disappeared in Italy, was of the type with concolorous coat, the one which is coming back is spotted or streaked, that is, has the same coat of its similar of the Swiss, Austrian and Slovenian Alpine side.

So, if we may be delighted for the return in our territory of this predator, on the other hand, we have to acknowledge that the autochthonous species which lived in our Alps has disappeared for ever. This issue has a general signification, because this sort of studies should be undertaken also on other types of species subject to a similar dynamics of repopulation of the Alps, such as, for instance, the Gypaetus, called also Bearded vulture, or Lammergeier or Old World vulture (Gypaetus barbatus). Most probably, as biologists, we should have to admit, sooner or later, that when a species is lost, this is, unluckily, for ever, and with the same disappears all the biologic and cultural patrimony it represented. 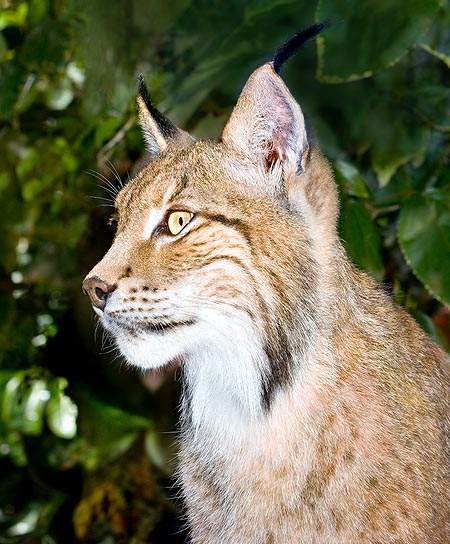 Its eyesight is notorious, smell and hearing excellent © Giuseppe Mazza

And this is not all. The introduction in a geographic area of animals coming from other zones, even if congeners or conspecifics, may cause a genetic pollution of the autochthonous population, which results, by means of the hybridization, in an impoverishment of the pure blood line.

Secondly, we have to consider the impact that operations of such type cause on the balance of an ecosystem.

Nowadays, for instance, in some areas of the Alps, where roe deer and deer were released, in absence of their natural predators and also due to their prolificacy, it has become extremely difficult to restrain their number. The populations reach often values which are greater than those the woods may bear, with the consequent destruction of the vegetation and the necessity of selective killing.

Presently, the Lynx lynx is rare in most of Europe.

They are animals leading a very circumspect, solitary and discreet inside the woody thickets. It is not very easy to see them.

Short body, stumpy tail black at the extremity, tufts of rigid hairs on the ears: these are the most evident characteristics of the European lynx.  The height at the withers is of 60-75 cm, the length head-body is of 80-130 cm, plus 11-24 cm of tail, with a weight varying between the 20 and the 30 kg. The male is bigger than the female. Its success, as predator, depends by sure on its very sharp sight and an equally fine smell, the strong and broad limbs and the hairy feet. All these features allow this animal, once the prey is sighted, to get close to it silently, crawling, and then seize it with a very fast leap. At times, they get so much close to jump on the back of the prey and bite it on the nape. This feline is able to jump on branches even at a height of 2,50 m or to pounce on the prey with lightning speed. Its big legs allow it to move quickly and easily on the soft snow, present in winter in the biotopes it lives, such as the Alpine woods, and to run after a prey without making the least noise. 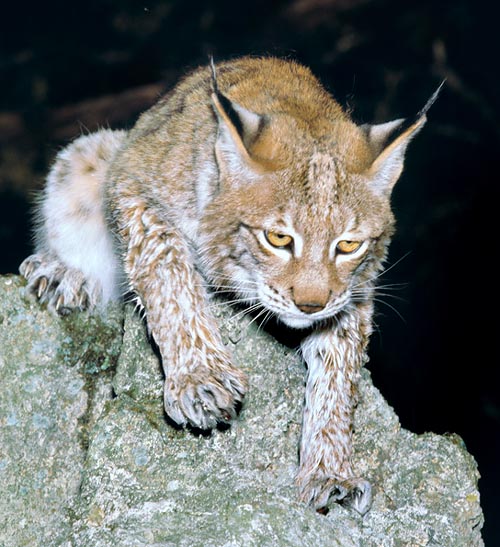 The fur pattern varies depending on the races. Presently, the biologists talk of:

And to above eight races, some authors add one more, not accepted by all, the Sardinian lynx (Lynx lynx sardiniae) which, in reality, does not have fossil remains, not even in natural history museums.

We must say that the Wildcat (Felis silvestris) is present in Sardinia, whilst the lynx has never been found. Perhaps the supposed sightings of the early ‘900 do rightly refer to this wild feline.

The lynxes eat all sort of micro-mammals (squirrels, rabbits and hares, mice and wild rats), and birds (wild roosters, pheasants, doves, ducks, mallards, etc.). It is thought that it attacks also the cubs, or the sick individuals, of roe deer, deer, ibexes and chammies.They are animals which rarely get out from the forest, apart when the food is scarce.

The females have a gestation lasting about 60 days. A certain number of slow-growing cubs come to life. When 9 months old, the still have their baby teeth (like all felines, they are diphyodont) and weak claws, which are of no use for even killing a hare.All along their first winter, they are nursed by the mother, and even during the weaning, they are mother-dependent. Therefore, if they lose her, they will die for starvation.