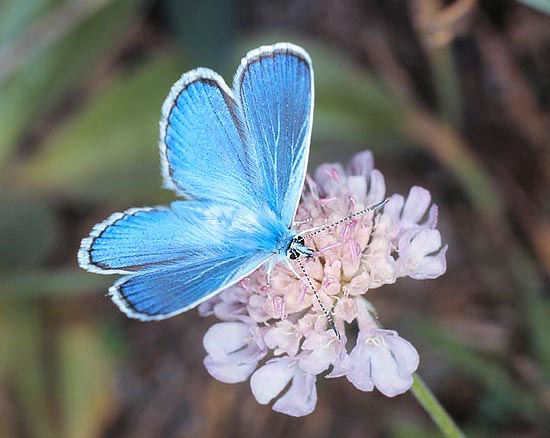 The common name of Adonis comes from a divinity connected with the revival and with the vegetation, present in the mystery religions of the ancient Egypt (Osiris), as well as in the Semitic cult (Tammuz or Baal Hadad), in the Etruscan (Atunis) and Greek.

It is mostly present in the vast and open plains, with a preference for the dry and stony locations.

The males have a beautiful bright blue colour, whilst the females are dark brown, with a dusting of light blue scales and with marginal orange, black and blue spots on the hind wings. 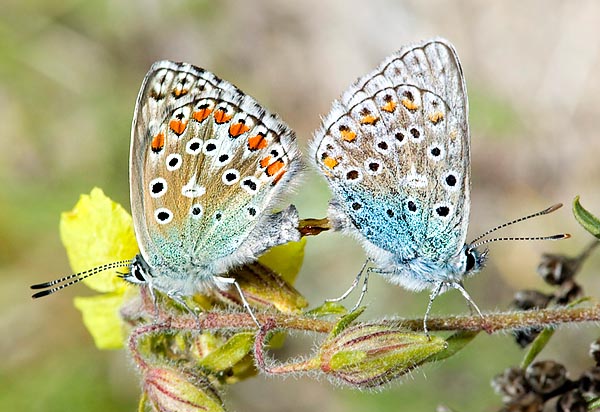 Lysandra bellargus mating. The wings lower side is similar in both sexes © Giuseppe Mazza

In the male, there are some white and black wing fringes at the lower border of the hind wings.

These are all characters of dimorphism. The lower side in the two sexes is of pale brown colour with black spots and orange patterns.

The adults have a diurnal flight. The green and yellow caterpillar develops on the Horseshoe Vetch (Hippocrepis comosa) and on the Crown Vetch Coronilla varia plants afferent to the family of the Fabaceae.