These birds can be up to a metre long. Because of their lively colours, they are called ” flowers of the forest “. Extinction has been averted. 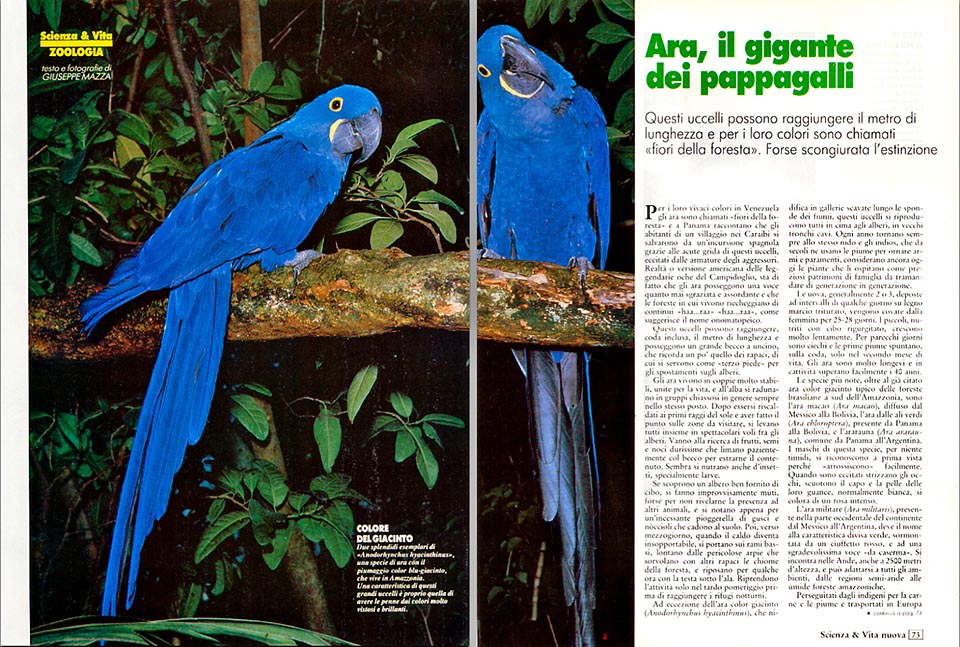 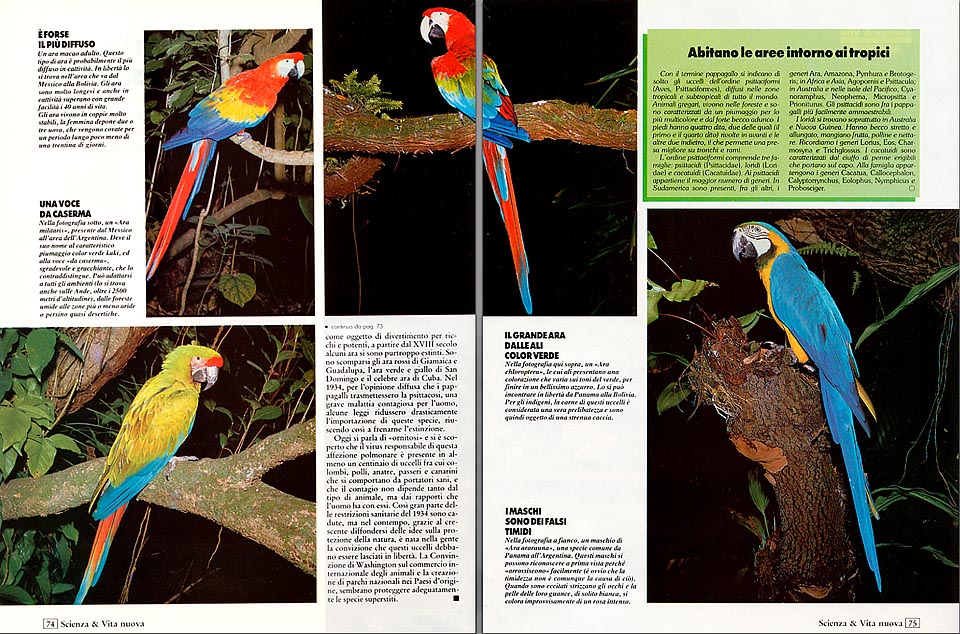 In Venezuela, for their lively colours, the Macaws are called “Flowers of the forest”, and in Panama they narrate that the inhabitants of a village in the Caribbean were saved from a raid of the Spaniards, thanks to the sharp crying of these birds, excited by the armours worn by the aggressors.

Reality or American version of the legendary geese of the Capitol, the fact remains that the Macaws have a voice clumsy and deafening as can be, and the forests where they live, resound of continuous “Haa…raa”, “Haa…raa”, as the onomatopoeic name suggests.

These birds can reach, tail included, the length of one metre and are provided of a large hooked beak, which somewhat reminds the one of the birds of prey, and which is used as “third foot”, during the displacements on the trees.

Macaws live in very stable pairs, united for the life, and at the daybreak they crowd together in noisy groups, always in the same place.

After having warmed up under the first rays of sun and having decided about the areas to visit, they take off all together in spectacular flights among the trees.

They go looking for fruits, seeds, and very hard nuts, which they patiently file with their beak, in order to extract the contents. It seems that they feed also on insects, especially larvae.

If they discover a tree well furnished of food, they suddenly hush up, perhaps not to reveal its presence to other animals, and they can just be noted owing to the an incessant rain of shells and of kernels which fall down.

Then, around noon time, when heat becomes intolerable, they go to the lower branches, away from the dangerous harpy eagles, which, along with other prey birds, fly over the tops of the trees of the forest, and rest there for some hours, with their head under the wing.

They resume the activity only late in the afternoon, before reaching their night shelters.

But the Hyacinth coloured Macaw (Anodorhynchus hyacinthinus), which nests in galleries dug under the banks of rivers, all these birds breed on top of the trees, in old empty trunks.

Every year, they come back always to the same nest, and the Indios, who since centuries are using their feathers to decorate
weapons and vestments, still consider the trees which shelter them as precious family patrimonies to pass down from a generation to the other.

Eggs, usually 2 or 3, laid at intervals of some days, on rotten grind wood, are brooded by the female for 25-28 days. Young, nourished with regurgitated food, grow up very slowly. For several days they are blind, and the first feathers spring up, on the tail, only during the second month of life. The Macaws have a very long life, and, when in captivity, can easily reach the 40 years of age and even more.

The better known species, besides the already cited Hyacinth coloured Macaw, typical of Brazilian forests south of Amazon, are the Scarlet Macaw (Ara macao), spread from Mexico to Bolivia, the Green winged Macaw (Ara chloroptera), present from Panama to Bolivia, and the Blue-and-yellow Macaw (Ara ararauna), common from Panama to Argentina. The males of this species, not shy at all, are recognizable at sight because “blushing” quite easily. When excited, they wink, shake heads, and the skin of their cheek, normally white, assumes an intense pink colour.

The Military Macaw (Ara militaris), present in the western part of the continent from Mexico to Argentina, is so called due to the typical green attire, surmounted by graceful red tufts and has a very unpleasant voice, which recalls military barracks. It can be found on the Andes, even at 2500 metres of altitude, and can adapt to all habitats, from the semi-arid regions to the wet Amazonian forests.

Persecuted by the natives for the flesh and the feathers, and carried to Europe as amusement objects for rich and powerful persons, some Macaws did unluckily extinguish since the XVIII century.

The Red Macaws of Jamaica and Guadeloupe, the Green-and-yellow Macaw of Santo Domingo, and the famous Cuban Red Macaw, have all disappeared.

In 1934, due to the spread out belief that parrots should convey the Psittacosis, a serious contagious disease for men, some laws reduced drastically the import of this species, thus succeeding in slowing down their extinction.

Today, we talk of “Ornitosis”, and it has been discovered that the virus responsible of this pulmonary affection (Chlamydophila psittaci) is present in at least a hundred of birds, among them pigeons, chicken, ducks, sparrows and canaries, which act as sound carriers, and that the plague does not depend too much from the kind of animal, but from the reports that man has with them.

So, a great part of the health restriction s was levied, but in the meantime, thanks to the increasing diffusion of ideas on the protection of nature, it has appeared among the people, the conviction that these birds should be left free.

The Washington Convention, ruling the international traffic of animals and the formation of protected areas in the origin countries, seem to protect adequately the surviving species.

→ To appreciate the biodiversity within the PSITTACIFORMES please click here.

Macaws : giant parrots, long even one metre was last modified: May 21st, 2019 by Giuseppe Mazza
error: Content is protected !!