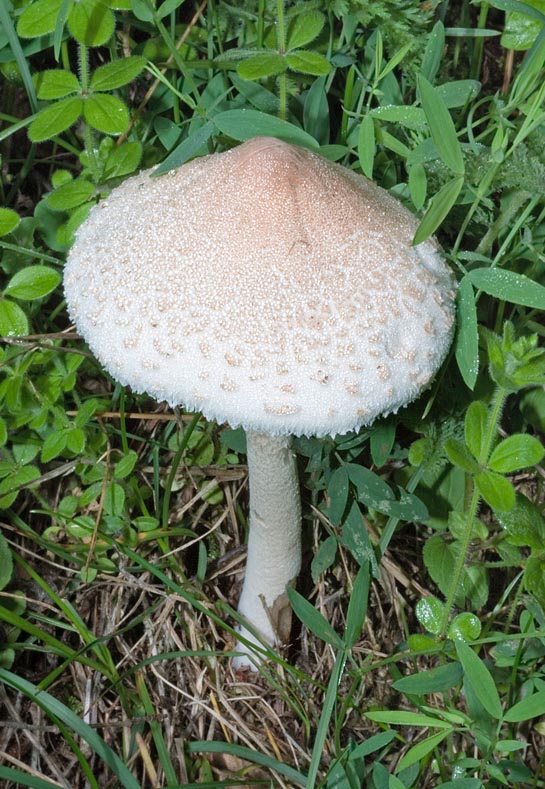 The epithet “mastoidea”, similar to breast, due to the huge central umbo which recalls the nipple, comes from the Greek “mastós” = breast, and “eîdos” = appearance.

It is a very common species and, like all abounding fungi, it holds several common names.

Description of the genus, section and subsection

For the description of the genus please refer to the text concerning the Macrolepiota procera.

To the section Macrolepiota are ascribed medium and big species, having the cap with big scales and a double ring, movable on the stipe. Clamp connections are present at the base of the basidia and in the hyphae in the lower face of the ring, but are difficult to locate.

To the subsection Microsquamatae belong species of medium size, having small scales on the cap, simple ring which at times has enlarged and scaly margin, movable on the stipe. Clamp connections are present in the sub-hymenium and in the surface of the stipe.

Cap: 7-12 (14) cm, initially conical-campanulate, then campanulate and finally flat, with pronounced umbo, breast-shaped; margin initially inrolled, then stretched, protruding on the gills; the cuticle, of ocherous, cream-ochre, light brown colour, cracks in small scales, initially adpressed then increasingly rare, especially at the margin, where they allow to see the white-cream colour of the background, the centre is of a more or less dark brown colour.

Hymenium: thick gills, intercalated by several lamellulas, spaced, with collar, initially white then cream, the thread, of the same colour, is entire.

Stipe: 8-15 x 1-1,5 cm, slender, cylindrical, attenuated on top, wide at the base which ends in a bulb, fistulose, fibrillose; surface finely decorated by pale ochre mottles, almost of the same colour as the cap on whitish background. Membranous ring, simple, the upper face is initially white then brownish, the lower one is whitish. 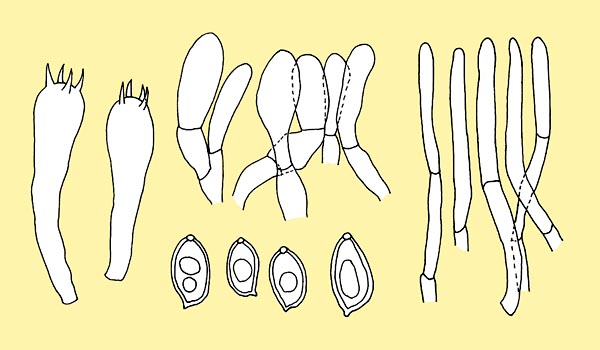 Flesh: thick in the centre and thin in the margin, soft, fibrous in the stipe, almost no odour, mild taste.

Habitat: it grows in summer and in autumn, in the glades of the broad-leaved trees woods.

Remarks: it’s an easy to recognize fungus, especially thanks to the cap which presents a very pronounced umbo and small scales which leave the edge uncovered; the stipe is finely ornamented by pale ochreous woolly tufts or scales on a whitish or pale cream background.

It is possible to mistake it with Macrolepiota rickenii (Velenovsky) Bellù & Lazzari 1987, which, however, has shorter stipe and the same is more proportionate to the diameter of the cap, the decorations on the stipe and on the cap are less evident and paler; Macrolepiota affinis (Velenovsky) Bon 1977, always ascribed to the subsection Microsquamatae, which, however, has a fine decoration on the cap as well as on the stipe formed by small scales of the same colour, in the hyphae of the pileipellis does have a vacuolar pigment associated with a membranary one.