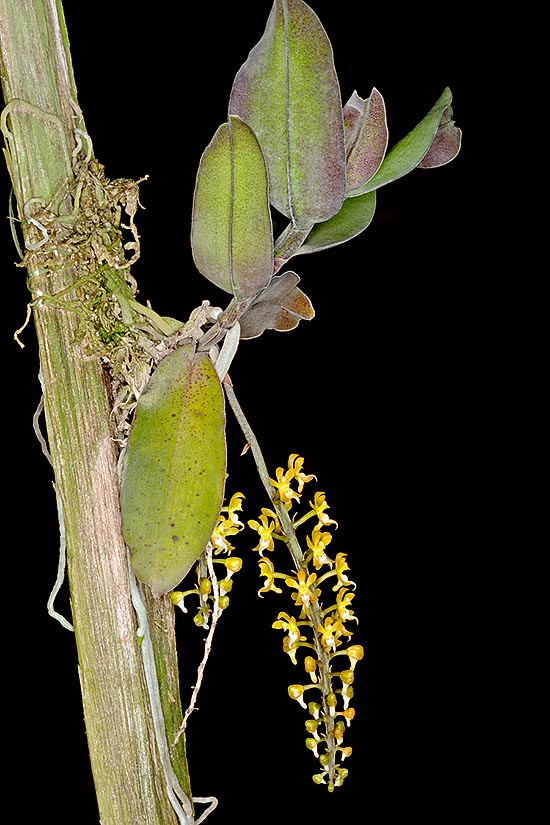 The species is native to Borneo, Java, Lesser Sunda Islands, Peninsular Malaysia, Philippines, Singapore, Sulawesi and Thailand, where it grows on the trees of the humid forests from the sea level up to about 1000 m of altitude.

The Malleola baliensis J.J.Sm. (1920) is a monopodial epiphytic species with almost cylindrical stem, wrapped by the imbricate foliar bases, and alternate leaves, distichous, entire, coriaceous, oblong-elliptic with apex having two unequal lobes, of dark green colour suffused with purple red, up to about 10 cm long.

Racemose drooping inflorescence about 9 cm long, carrying numerous tiny flowers, of about 1,25 cm of diameter; with free sepals concave and turned ahead of yellow colour with purple red hues on the border, flat yellow petals and white trilobed labellum with erect lateral lobes and median lobe linear lanceolate with pointed and retroflexed apex, provided of a crest at the centre and a sort of saccate spur at the base.

It reproduces by seed, in vitro; at amateurish level can be reproduced by taking off the terminal part of the stem, provided of leaves and roots, and placing it in the compost maintained slightly humid in a location with high atmospheric humidity and temperature, 24-26 °C; the basal part will produce a new stem.

Rather rare mini-orchid in the collections and of not particularly easy cultivation which may bloom various times during the year, requires high luminosity, but not direct sun, medium-high temperatures, 22-30 °C, and high humidity, 70-85%, with a good and constant ventilation.

The waterings must be regular, allowing to partially dry up before giving water again, utilizing, also for the nebulisations, rain water, from reverse osmosis or demineralised at ambient temperature.

The fertilizations, properly alternated to the waterings in order to avoid salts accumulation at the roots, are to be done using hydrosoluble balanced products at ¼ of the dosage suggested by the producer. 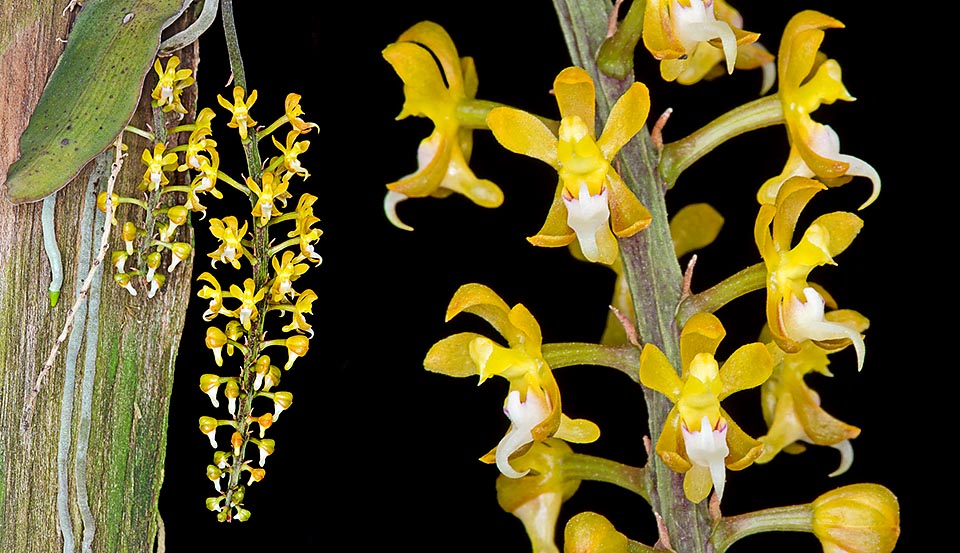 The about 9 cm long drooping inflorescence bears numerous tiny flowers of 1,25 cm of diameter. Rare in the collections and of not easy cultivation © Giuseppe Mazza

It is usually mounted on small branches, pieces of bark or rafts of cork, with some sphagnum at the base for maintaining the humidity, can be also cultivated in pot with draining and aerated compost that can be formed by medium size fragments of bark and sphagnum. Transplants and repottings are to be done when strictly necessary at the vegetative restart, signalled by the appearance of the new roots.