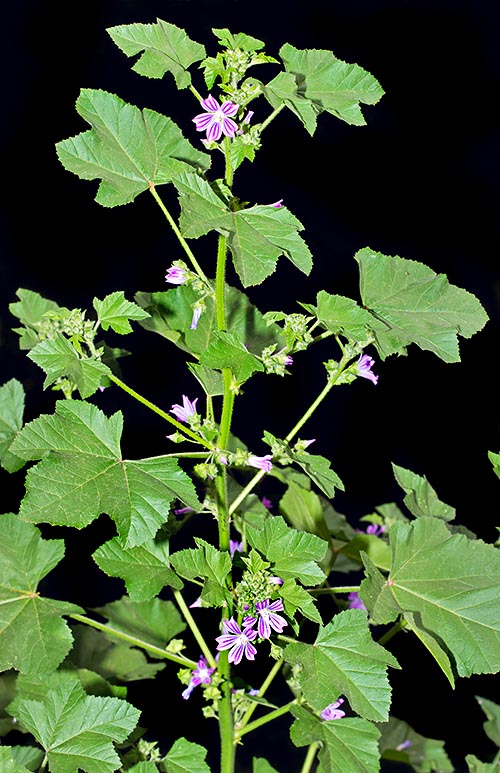 In spite of the name Malva sylvestris prefers ruders and fallows to the woods © G. Mazza

After various authors, the genus Malva includes 30 to 40 species of annual, biennial or perennial herbaceous plants diffused in the boreal hemisphere in the temperate, tropical and subtropical African, Asian and European regions. In Europe are reported fifteen species and three infraspecific hybrids.

The name of the genus is a term deriving from the Greek “malakos”, “malakhé” = tender, or rather I soften, due to the emollient properties due to the richness of mucilages of many species of this genus. The name of the species “sylvestris” indicates that it is a plant of the forests and the woodlands.

The Common mallow (Malva sylvestris L. 1753) is a polymorphic herbaceous plant, with a big taproot, perennial or rarely annual/biennial, almost glabrous (var. mauritiana), to variably hairy or tomentose-hirsute due to the presence of simple or stellate hairs, 30-60 cm tall (<1,5 m), with erect or diffused-prostrate stems, caespitose, ramose, tenacious, woody at the base, usually prostrate-diffused or ascending, striated, hispid.

Pedunculate flowers, in 2-6 bundles at the axil of the leaves or rarely solitary, with corolla with obcordate petals, 3-4 times longer than the sepals, of pink or lilac (rarely white) colour and longitudinal purplish venations; blooming from (March) May to August (October).

At the base, the petals are united to the tube formed by the filaments of the numerous stamina, tube run inside by the styles, also united in the lower part.

Little accrescent calyx, with five widely trilobed lobes, not covering the fruit when ripe; this is dry, polycoccous, formed by reniform mericarps, brownish, glabrous or pubescent, flattened and reticulated-wrinkled on the back, containing one seed only.

Native to Europe, Western Asia and North Africa, it has become a cosmopolitan plant.

The mallow, in spite of what indicated by the name of the species, preferably lives in the uncultivated areas, the fences, the ruderal and rural environments, the borders of the roads and of the ditches, the soils rich of nutrients (especially nitrates), orchards and trampled places, accumulations of debris and garbage, behaving more as ruderal-anthropophilous plant than as a woody element. It grows from the plain up to 1400-1600 m of altitude. 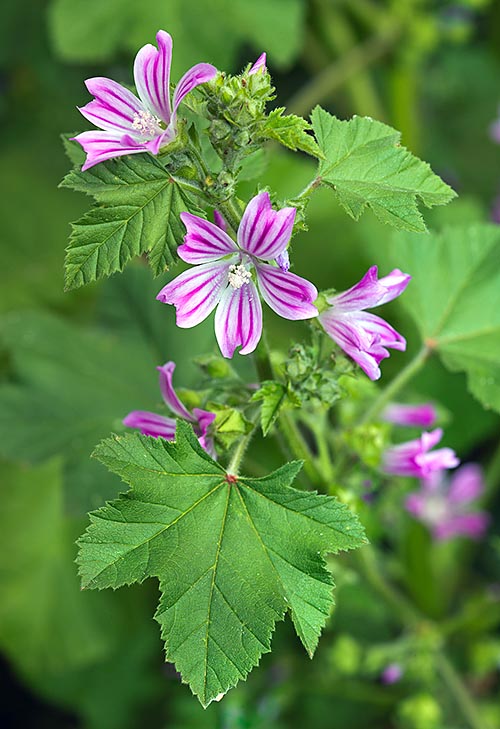 Most of the mallow for commercial use (food, integrators, aromas, cosmetics, feedstuffs) is produced especially in east-European countries (Hungary, Bulgaria, Czechoslovakia, Yugoslavia and Albania besides Morocco and Iran). Some ornamental varieties have been selected and are cultivated in the gardens, such as the Blue Fountain and the Zebrina.

It is an officinal plant and is one of the four bechic species of the old pharmacopoeia along with the Marsh-mallow, the Pellitory and the Mullein; in the XVI in Italy it was called “omnimorbia”, that is, remedy for every ailment and was already widely known since the most distant past also as edible plant.

For the phytotherapeutic employments the upper leaves and the flowers are collected in June and July. The leaves presenting on the lamina some orange or rust small spots are to be thrown away because they are hit by the attack of the parasitic fungus Puccinia malvacearum.

The main components of the flowers are the mucilage (8-10%) which gives by hydrolysis: galactose, arabinose, glucose, rhamnose, galacturonic acid; tannins, malvin, malvidin, delphinidin. The leaves contain mucilages, polysaccharides, tannins, resins, pectins, calcium oxalate and other mineral salts, vitamins A, B1, C and flavonoid sulfates. The main properties are emollient, anti-inflammatory, bechic, protective of the intestinal mucosa and of the respiratory apparatus, stomachic, antiulcer, lenitive, vulnerary, mildly laxative and antitussive.

Decoction and infusions are used as sedatives and emollients in the intestinal chronic catarrhs, as mouthwashes in the inflammations of the oral cavity and of the respiratory tract. Externally, they may be applied on boils, varicose veins, couperose, dermatitis and eczemas with acute inflammation, etc. The infusion at the 1% was used, by spoons, as protective and emollient in case of gastroenteritis. For the same purpose, it has found employment under form of enema in case of rectocolitis.

In the cuisine, the tender leaves and the petals furnish a good wild vegetable, raw, united to other species, or cooked in risottos and soups.
Cicero in his “Epistulae” reminds a famous pie of mallow of which he was so much greed to get indigestion. In the XVI century the renowned Pier Andrea Mattioli exalted in his work the anti-inflammatory and emollient virtues of the mallow: “….the crushed leaves of mallow applied with oil medicate the fire burns…it decoction mollifies the hardness of the secret places of the women and by getting enemas it is good for the guts gnawing…its gargled decoction removes the roughness of the mouths and of the throat”. 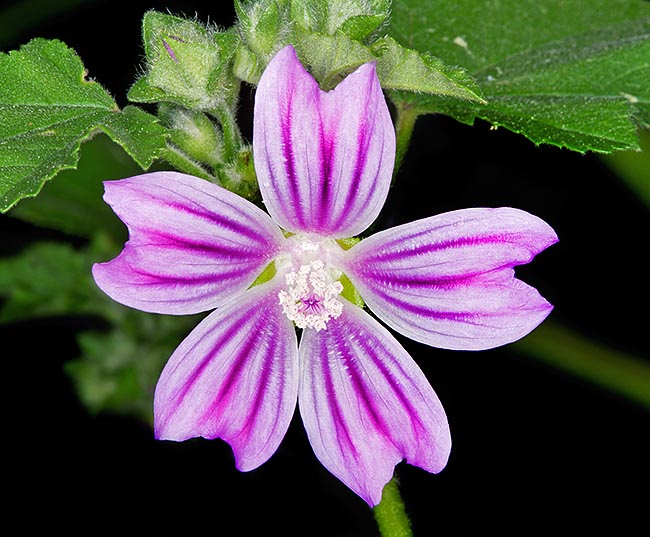 Polymorph taproot herbaceous, grows from plains up to 1400-1600 m of altitude. Blooms from spring to early autumn with unmistakable pink or lilac, seldom white, corollas with purplish veins © Giuseppe Mazza

A teaspoon per cup of water. When the water boils, turn off the heat and add the exsiccated flowers; leave in infusion for fifteen minutes, strain and add some honey.

One handful of crushed leaves in one cup of skimmed milk.

To boil for five minutes and apply the lukewarm leaves on the inflamed gums.

Cold macerate for compresses against the skin irritations

Finely shred fresh flowers and leaves of mallow (20 + 50 g) or go to the blender, add 150 cl of water and leave to rest a couple of hours.

To strain by pressing well and use more times per day as disinflaming.

Malva sylvestris was last modified: May 22nd, 2020 by Giuseppe Mazza