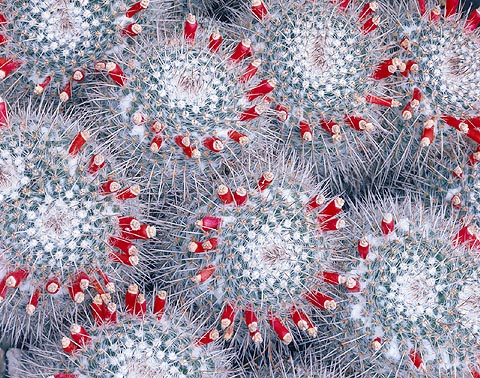 Easy and much tilled for its beautiful stems, flowers and fruits © Giuseppe Mazza

The Mammillaria parkinsonii C. Ehrenb. (1840) is native to central Mexico (state of Querétaro de Arteaga), where it grows between the 1000 and 2000 m of altitude in semi-desert areas characterized by warm-temperate dry climate and on soils mostly calcareous.

The name of the genus comes from the Latin “mamilla” = nipple, referring to the tubercles present in these plants; the species is honoured to John Parkinson, English consul in Mexico, fond of botany, who collected several Mexican species.

Plant with bluish green stems, globose at the beginning, slightly depressed, then cylindrical up to about 15 cm tall and with an 8 to 15 cm diameter, with the apical zone more or less flattened, covered at the centre by a white lanugo; the stems, initially solitary, with the time tuft by dichotomic division forming compact bunches.

It has spirally placed, 8-10 mm long, pyramidal tubercles, woolly, and silky at their base, areolae; the apex of the tubercles, initially covered by white lanugo, is equipped with 2-5 central thorns, usually bent downwards, rigid and whitish with dark apex, the upper one, 4-8 mm long, the lower one is up to 35 mm and more, long, and 20-30 white, radial thorns, thin and slightly bent, 4-6 mm long. The funnel-shaped flowers are pale yellow with central red venation, 12-15 mm long and broad, diurnal, placed in circle close to the apex, originate from the areolae at the base of the tubercles.

The club-shaped fruits, about 10 mm long, are of orange red colour and contain several pyriform seeds, about 1,5 mm long, of brown colour. It reproduces by seed and by division. It is one of the most cultivated and appreciated plants by the collectors, both for its look and for the facility of its cultivation, to be placed in full sun or, however, at the maximum possible luminosity, on particularly draining soils which can be formed by about the 50% of common, manured, garden earth and for the rest, in equal quantity, by sand (agriperlite) and dustless crushed stones.

It is rather resistant to low temperatures, as it can bear, dry and for short time, temperatures as low as -4°C; its best collocation in open air, climate permitting, is in the “desert” gardens, together with other xerophytes; elsewhere, is to be cultivated in pot with the same aforesaid modalities. In summer, during the vegetative period, it to be regularly watered, but allowing the mould to dry up completely before giving water again, in winter is to be kept dry, and with rather low temperatures, but not inferior to +5°C, this resting period, cold and dry, is indispensable for a good blossoming.

Mammillaria parkinsonii was last modified: May 8th, 2018 by Giuseppe Mazza