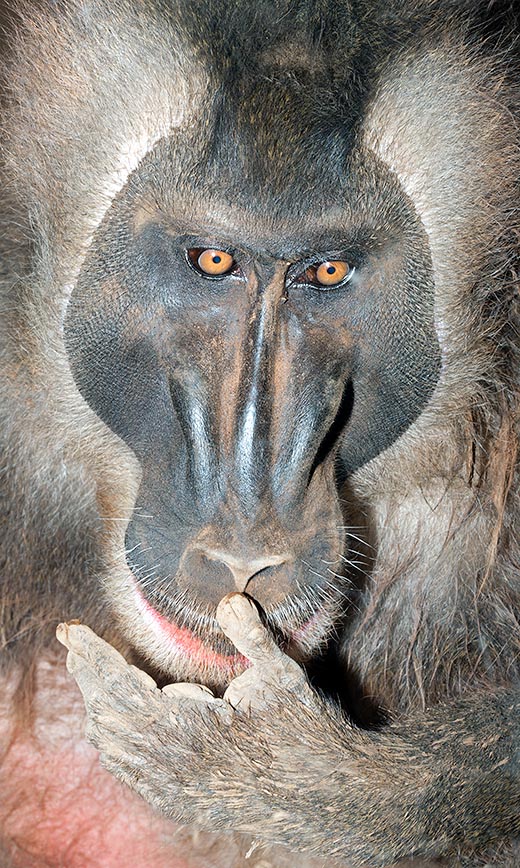 Two subspecies are usually accepted, the nominal one for the continental area and the poensis (Zukowsky, 1922) of the Bioko Island (Equatorial Guinea).

Mandrill and drill have been traditionally united to the baboons Papio sp. and to the gelada Theropithecus gelada (Rüppell, 1835) into the informal group called ‘cynocephalyc monkeys’ due to the skull, highly developed in length, especially in the adult males, which renders them similar to that of a dog. It should be noted that for the most part of the XIX century, drill and mandrill have been referred to the genus Papio whilst the real baboons were included into the Cynocephalus.

Recent genetic and morphological researches have however established that the cynocephalyc monkeys are not closely related to each other, but that, the genus Mandrillus is more akin to the semi-terricolous mangabeys of the genus Cercocebus, with which it shares adaptations to an alimentation composed by seeds and nuts. The number of the chromosomes, like in all the Papioninae, is 2N = 42.

The geographical distribution of the drill extends from the Sanaga River in Cameroon [which marks the boundary with the distribution of the mandrill Mandrillus sphinx (Linneus, 1752)] to the west up to the Cross river in Nigeria. It is also present in the Bioko Island, in the Gulf of Guinea as well as in Cameroon, Nigeria and Equatorial Guinea.

Like the mandrill, also the drill is characterized by remarkable sexual dimorphism, with the females weighing from 7 to 12 kg, less then half the males which may reach the 27 kg when mature, that is when around 10 years old.

Unlike the male mandrills, the drill ones do not have bright colourations on the face which is, on the contrary, totally blackish (but a pink area on the chin) and surrounded by a thick white ‘beard’. The buttocks of the male are, instead, brightly coloured of pink under the tail and then become gradually blue.

Like for the male of mandrill, also in the drill we find some paranasal swellings which act as secondary sexual characters, unique feature amongst the primates, which, however, in the drill do have the same black colouration as the rest of the face. Like in the mandrill and unlike the baboons of the savannas, the tail of the drill is erect and very short, as it does not exceed the 8 cm.

The male has developed canines which, besides in the intra-sexual competition have a role also in the defence from the predators, the leopard in particular. A particularity of the clade Mandrillus/Cercocebus is the presence of premolars as big as the first molar, a primitive character which can be related with the necessity of breaking nuts and seeds.

From the ecological point of view, the drill, like the mandrill, may be described as a forestal semi-terricolous frugivore. Its diet includes also invertebrates, small vertebrates, eggs (also of sea turtles!) and tubers which it looks for in the litter on the ground and also ants and termites. 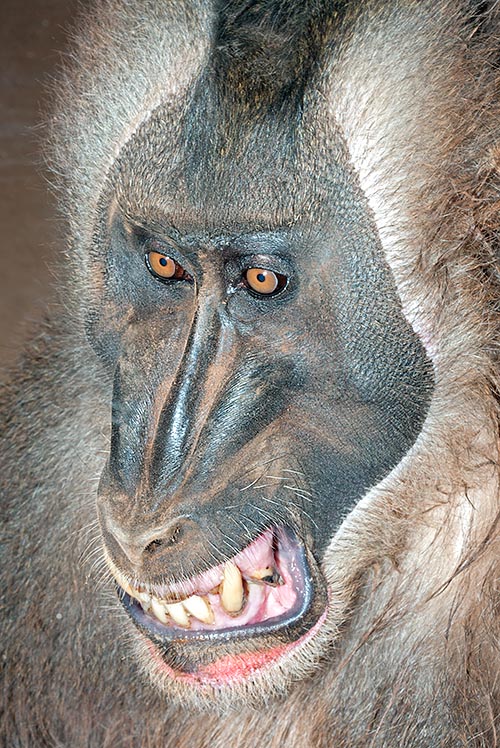 It spends the night on the trees. As it is a common practice in the cercopithecids, the females remain in the group where they were born and form the framework of the social structure, whilst the young males leave the natal group. In Cameroon, they have observed groups composed by 14 to about 200 units – result of the temporary aggregation of more groups. In the Bioko Island, the groups seem not to exceed the 20-25 individuals, with only one adult male. Solitary males are known. Preliminary observations in the Korup National Park suggest the existence of a multi-levelled sociality, where the smaller groups unite in more numerous hordes for the night.

The females have a swelling of the perianal zone during the ovulation, more reduced, however, than what shown by the baboons of the genus Papio spp. The menstrual cycle is of 33 days and the gestation lasts 175 days; the deliveries mainly take place during the humid season.

Due to its size, the drill is a prized prey of the hunters all over its distribution range and this has caused the disappearance of the species from vast regions. The increasing utilizations of dogs reveals decisive for obliging the animals to seek shelter on the trees, from where then they are easily killed and it results, therefore, as one of the major factors of danger for the species.

The cutting, also selective, of the forests represents a major menace for this and for other species subjected to hinting, the so-called ‘bushmeat’, as it opens easy access ways for the hunters and for the transportation of the carcasses towards the urban markets. Also in the drill as well as in other African monkeys, have been isolated SIV (Simian Immunodeficiency Virus) specifics similar to the HIV affecting our species. In this respect, it is interesting to note also that the virus identified in the Bioko drills is different from the continental one.

Due to its ecological characteristics, the drill needs much vast territories and therefore small protected areas may reveal useless in the long term. It is a species considered as Endangered (EN) by the IUCN (World Conservation Unit) and is included in the Appendix I of the CITES (Convention on International Trade in Endangered Species of Wild Fauna and Flora).

Unfortunately, the species seems to be in great decline even in the Korup National Park, in Cameroon. There is a small population of about 90 units in the zoos of the entire world and are active several centres of recovery in the origin countries trying to create groups of animals socially competent by utilizing specimens saved from the local pets trace.

The first known depiction of a drill is a work made by the painter Christoph Aichele published in the Conrad Gesner (1551) opus. The first reproduction in a zoo took place in Berlin on 1910. The maximum longevity as captive has been reached by a male of the San Diego Zoo, who lived for more than 38 years.