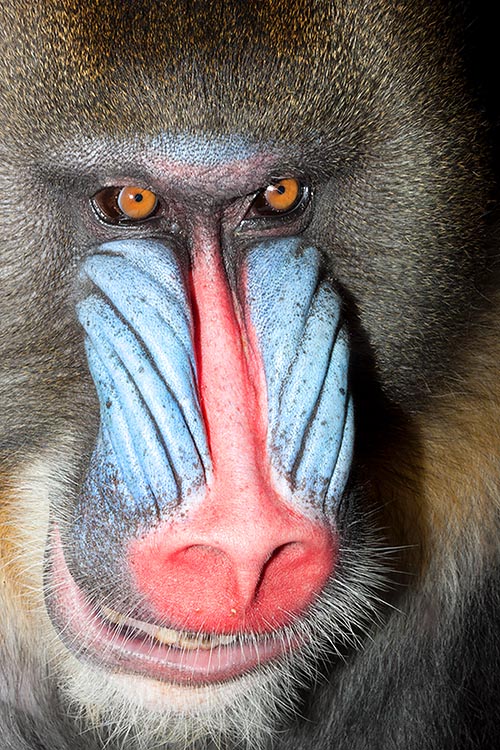 United, traditionally, with the baboons Papio sp. and the gelada (Theropithecus gelada Rüppell, 1835) into the informal grouping called “cynocephalic monkeys” due to the high development of the skull in length, in particular of the adult males, which render them similar to that of a dog.

Recent genetic and morphologic researches have however established that the cynocephalic monkeys are not strictly related between themselves, but rather that the genus Mandrillus is much more similar to the semi-terricolous cercocebs of the genus Cercocebus, with which it shares the adaptations to an alimentation composed by seeds and nuts.

The number of the chromosomes, like for all Papionins, is of 2N = 42.

The geographical distribution of the mandrill extends from the Sanaga River in Cameroon [which marks the boundary with the distribution of the Drill (Mandrillus leucophaeus F. Cuvier, 1807)] to the east, up to the Ivindo and Ogooué Rivers in Gabon. To the south, it does not go beyond the Congo River (Zaire). It is therefore present in Cameroon, Equatorial Guinea, Gabon and Congo Popular Republic.

The species, the monkey, excluding the anthropomorphic ones, is the heaviest nowadays extant, is characterized by a remarkable sexual dimorphism, with the females weighing, as an average, about 12 kg, much less then a half of the males which may reach the 35 kg when mature, that is when about 10 years old.

These ones have bright colours on the snout, on the buttocks and the scrotum and a swelling with pronounced folds on the sides of the nose. Already Darwin reported that in the moments of excitation the colours of the naked parts become even brighter.

Another difference with the baboons of the savannahs is that the tail of the mandrill is erect and very short, as t does not exceed the 8 cm.

The male has developed canines which, besides in the intra-sexual competition, cover a role also in the defence from the predators, in particular the leopard (Panthera pardus). 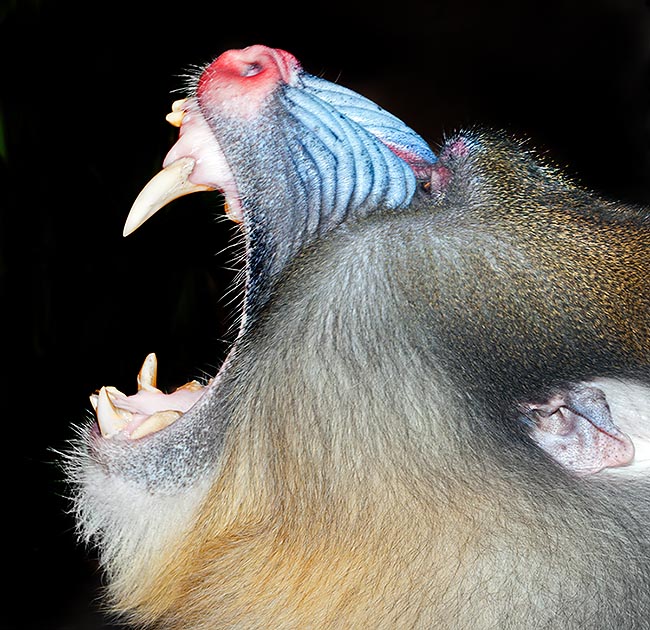 Wrong symbol of violence and lust, it has however scaring canines © Giuseppe Mazza

A typical particularity of the clade Mandrillus / Cercocebus stands in the presence of premolars as big as the first molar, a primitive character which may be related to the necessity of breaking nuts and seeds.

The masculine mandrill is one of the few Old World monkeys to show behaviours of chemical marking through a gland on the sternum, behaviour connected with the sexual activity which is done starting from the age of seven years.

Generally, in fact, it was thought that the sense of smell did cover an important role only in the prosimians and in the primates of the New World.

From the ecological point of view, the mandrill can be described as a semi-terricolous, forestal frugivore.

They have observed, however, that it tends to prefer the seeds fallen on the ground after the period of fructification.

An important consequence is that the seeds, as decomposing more slowly than the fruits, form an important alimentary resource well after the period of fructification and not easily accessible to other animals.

Its diet includes also invertebrates, small vertebrates, eggs and tubers it looks for in the litter on the ground and also ants and termites. It spends its night time on the trees.

A it is common in the cercopithecids, the females are philopatric and form the framework of the social structure, whilst the young males do leave the natal group. 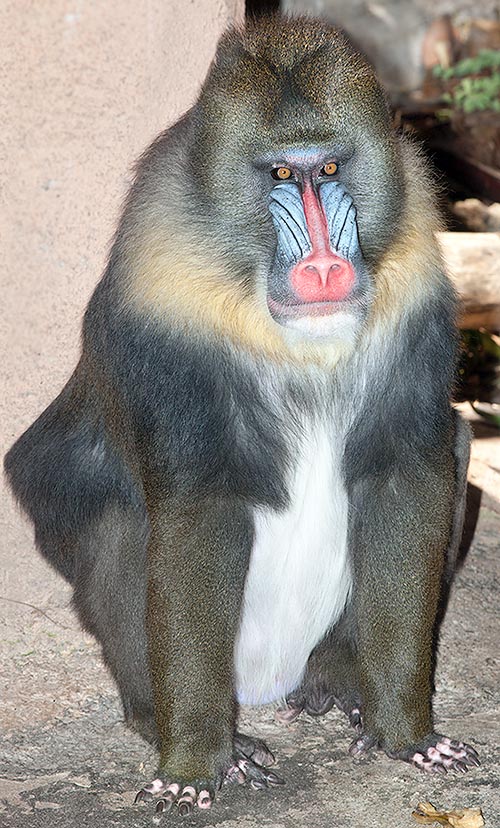 With 35 kg, the male is the heaviest monkey, but anthropomorphic ones © G. Mazza

It was thought that small social units might unite in order to form groups of even more than 50 individuals.

Some scholars have been recently capable to observe hordes of hundreds of mandrills moving together in true and proper migrations during the season of scarce availability of fruits.

In the National Park of the department of Lope, in Gabon, one of these hordes included from 600 to 800 individuals between females and young.

The adult males are seemingly solitary but a two-three months period, during the dry season, when they join the horde and compete intensively for accessing to the females.

It is during this time that they utilize a rich repertoire of vocal and visual signals besides marking the trees with their sternal gland.

The males utilize the fat reserves previously accumulated because they are not capable to nourish during this period, a strategy which reminds that of the red deer Cervus elaphus.

The huge number of specimens forming the hordes render their yearly “home range” is very vast whilst the adult males are probably related to quite limited areas.

In Lope, the are of an horde of about 700 mandrills has been calculated in approximately 182 square kilometres, 90 of which of closed forest.

The mandrills have preferably utilized gallery forests, isolated fragments with high botanical density rather than true and proper forest.

The females have a swelling in the perianal zone during the ovulation, however in more reduced dimensions than those shown by the baboons Papio spp.

The gestation lasts 175 days and the deliveries happen mostly during the humid season.

The first description of the mandrill is that of the Swiss naturalist Konrad Gesner (1516-1565) who was impressed by its submission gesture:

“When it is menaced or is indicated with a finger, this animal rolls over showing the buttocks”. Later on, the Cuvier will describe this mandrill with these not gratifying words: “The cry, the look and the voice of the mandrill point out a total indecency. It seems that the Nature has done of this animal the epitome of vice in all its disgusting ugliness”. 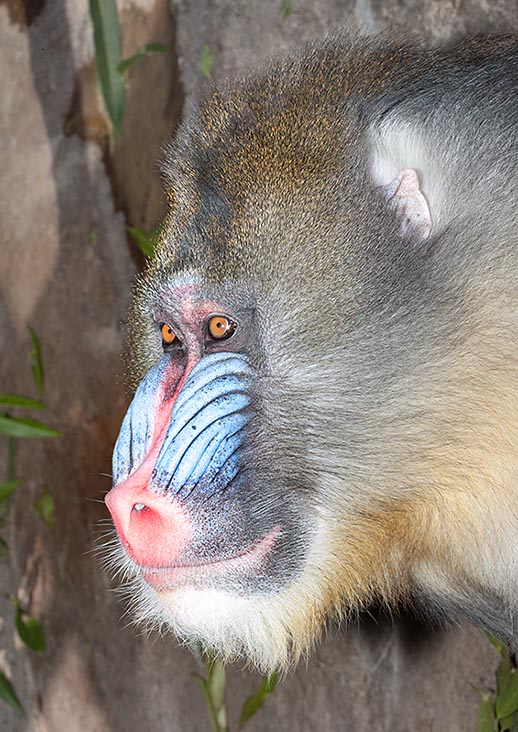 “Its eyes shine with a hellish brilliance, yet substantiated by the evil force which exudes from all its body”.

The teeth grinding, which in the species has a pacifying meaning, and other behaviours highlighting the coloured sexual areas have led often in the western world to see in the mandrill a symbol of violence and lust, thing that, nowadays, appears as not at all justified.

It is probable that further studies will make justice of the cognitive skills of the mandrill.

Even if rarely domesticated, a famous mandrillnamed Happy Jerry, of an excellent character and skilled user of fork and knife, had the rare privilege of dining at the table of George IV in the royal castle of Windsor.

Due to its size, the mandrill represents a sought for prey of the hunters everywhere inside its home range, and this has caused the disappearance of the species from vast regions. The cutting of the forests, even if selective, represents a major menace for this and other species subjected to hunting, the so-called ‘bushmeat’, as it opens easy access ways to hunters and for the transport of the carcasses towards the urban markets.

The mandrill, due to its ecologic characteristics, needs very vast territories and therefore protected areas of small dimensions may prove ineffective in long term. It is considered as Vulnerable (VU) by the IUCN (World Conservation Union). The species is included into the Appendix I of the CITES (Convention on International Trade in Endangered Species of Wild Fauna and Flora).

A thriving population does exist in the zoos of the entire world.

The first reproduction took place in Dublin in 1876. The maximum longevity, when in captivity, is of 40 years.