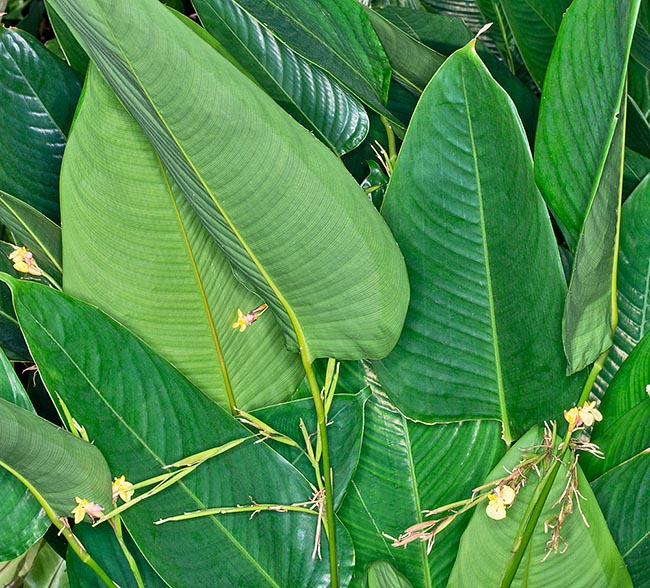 Marantochloa cuspidata is is a perennial rhizomatous herbaceous evergreen species, of Central Africa where may be 2 m tall with 50 cm leaves and racemose terminal inflorescences, even 1 m long © Giuseppe Mazza

The species is native to Central African Republic, Ghana, Guinea, Ivory Coast, Senegal, Sierra Leone and Togo where it lives in the underwood of the humid forests, in the savannahs and along the banks of the water streams.

The generic name is the combination of Maranta, genus honoured to the Italian physician and botanist Bartolomeo Maranta (1500-1571), and of the Greek substantive “χλόη” (chloe) = grass; the specific name is the Latin adjective “cuspidatus, a, um” = pointed, with reference to the apex of the leaf.

The Marantochloa cuspidata (Ros- coe) Milne-Redh. (1954) is a perennial rhizomatous herbaceous species, evergreen, often with only 1-2 leaves, forming dense tufts, up to about 2 m tall, with little ramified erect stems.

The leaves, on a 15-20 cm long petiole, are alternate, simple, ovate to oblong-lanceolate with long pointed apex not in line with the central nervation and entire margin, asymmetrical with respect to the central nervation, 15-50 cm long and 8-25 cm broad, coriaceous, of glossy intense green colour above, paler below. Racemose terminal inflorescences, up to about 1 m long, provided of green bracts, 2-4 cm long, that subtend the hermaphroditic flowers in pair, on a 1 cm long pedicel, with 3 free sepals, tubular corolla 2 cm long with 3 lobes, stamen and staminodes arranged in two verticils, the inner one formed by the fertile stamen and one yellow staminode and the outer one by two yellow petaloid staminodes. The fruit is a tri-lobed globose capsule, of 0,8 cm of diametre, of yellow colour, villous, containing three trigonous seeds provided of aril.

It reproduces by seed, in draining loam maintained constantly humid at the temperature of 24-26 °C, and easily by division. 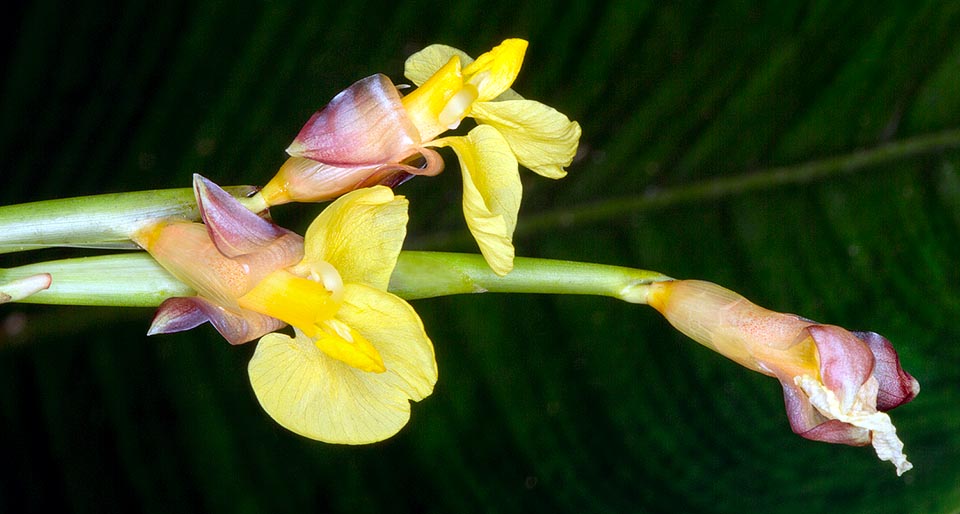 Hermaphrodite flowers in pair with 3 free sepals. Tubular 2 cm corolla with 3 lobes. Stamen and staminodes arranged in two verticils, the inner formed by the fertile stamen and one yellow staminode and the outer one by two petaloid yellow staminodes. The great leaves are used for wrapping foods and in the traditional medicine © G. Mazza

Species cultivable in the tropical and humid subtropical climate zones in sull sun or partial shade and without any particular exigency concerning the soil, provided with an ample availability of water.

The leaves, harvested in the forest and sold every day in the markets, are utilized for wrapping the cola nuts, in order to avoid their drying up, and for cooking foods, and, conically wrapped, for collecting the honey; furthermore, they are used as cover of rural dwellings. Finally, the leaves are utilized in the traditional medicine, as infusion, in case of diarrhea and dysentery.