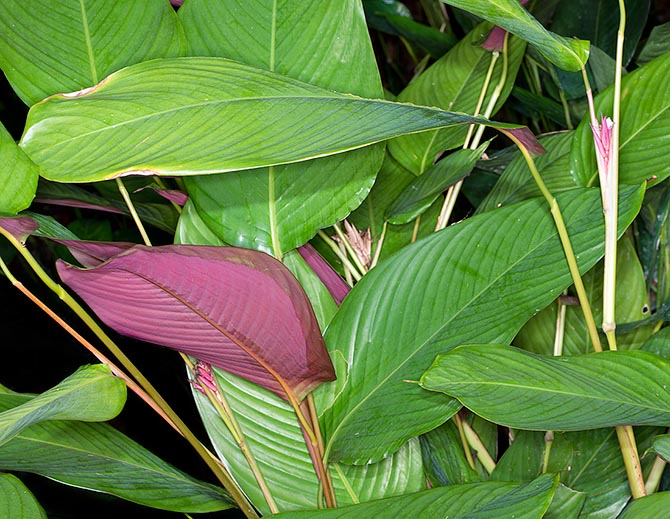 Native to Central Africa, the Marantochloa mannii may be 2,5 m tall with, ovate to lanceolate purple suffused leaves, below, even 40 cm long and 20 cm broad. Asymmetrical compared to the central nervation © Giuseppe Mazza

The species is native to Cameroon, Central African Republic, Congo, Democratic Republic of the Congo, Gabon, Ghana, Guinea Gulf Islands, Ivory Coast, Nigeria, Sudan, Tanzania and Uganda, where it lives in the underwood of the swampy forests subject to periodical floodings and along the banks of water streams, from the sea level up to about 1500 m of altitude.

The generic name is the combination of Maranta, genus honoured to the Italian physician and botanist Bartolomeo Maranta (1500-1571), and of the Greek substantive “χλόη” chloe) = grass; the species is honoured to the German botanist and collector Gustav Mann (1835-1916).

The leaves on a 12-28 cm long petiole, are simple, alternate, ovate to lanceolate, 14-40 cm long and 7-20 cm broad, with entire margin, lamina asymmetrical in respect to the central nervation and long pointed apex not lined with the same, coriaceous, of glossy intense green colour above, glaucous or purple suffused below.

Compact terminal inflorescence, about 10 cm long, formed by pink to red bracts, about 3,5 cm long, subtending hermaphroditic flowers in pair, about 2 cm long, white to pale pink, with 3 sepals, tubular corolla with three lobes and stamen and staminodes arranged in two verticils, the inner one formed by the fertile stamen and one staminode and the outer one by two petaloid staminodes. The fruit is a trilobed globose capsule containing thre trigonous seeds provided of aril. 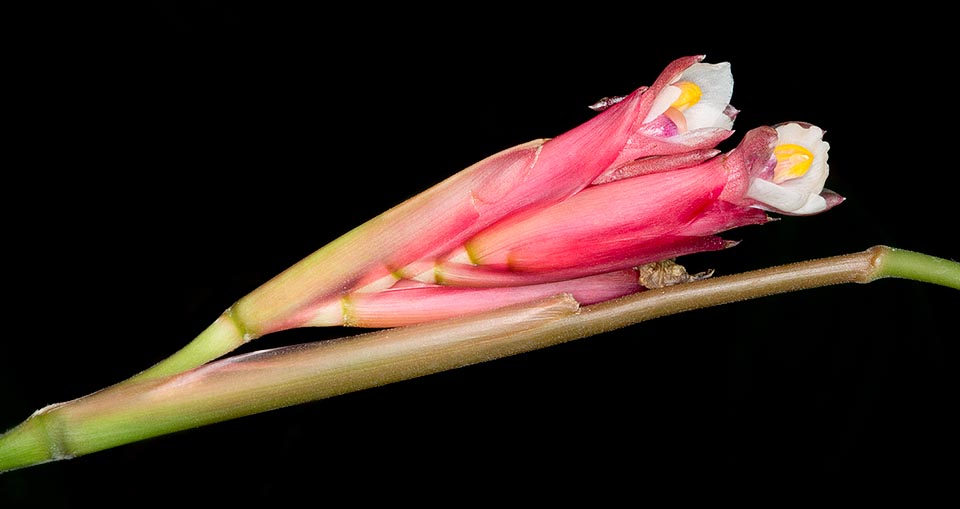 It reproduces by seed, in organic loam maintained constantly humid at the temperature of 24-26 °C, but usually and easily by division.

Species with ornamental foliage little known out of its origin zones, cultivable in the tropical and humid subtropical climate regions in partially shaded position and without particular necessities concerning the soil, even if poor, but with ample and constant water availability. The leaves are locally utilized as cover of rural dwellings and to wrap and cook food on the grill; the fibres gotten from the stems are used to realize mats, baskets, fishing nets and common usage articles.