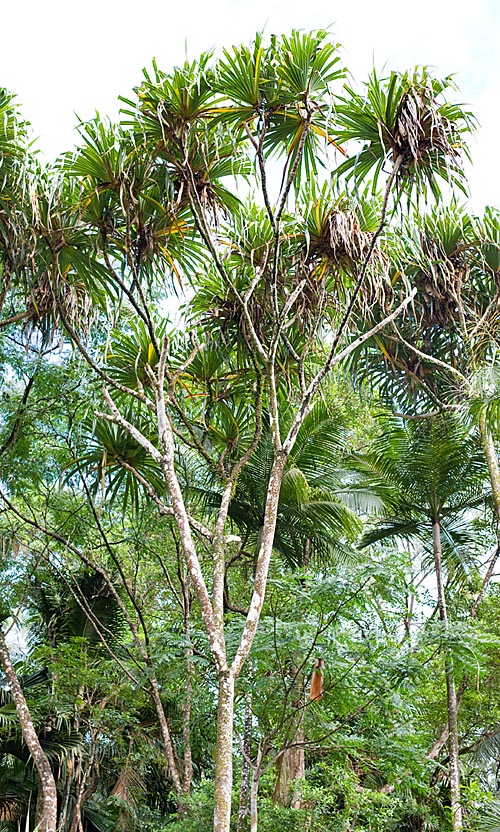 The species is native to Seychelles, where it grows mainly in the pluvial forests along the water streams and in periodically flooded areas, where it is often the dominant vegetation, up to about 500 m of altitude.

The name of the genus is the combination of the name of the Italian botanist Ugolino Martelli (1860-1934), founder of the magazine “Webbia” and known for his studies about the systematics of the genus Pandanus, and of the Greek term “dendron” = tree; the species is honoured to the Scottish botanist John Horne (1835-1905) who was the director of the Pamplemousses (Mauritius) Botanical Gardens.

The Martellidendron hornei (Balf.f.) Callm. & Chassot (2003) is a dioicus (each individual carries either only male flowers or female ones) species, with a slender stem, thin, marked by the annular scars traces of the fallen leaves, 10-18 m tall, ramified in the apical part; at the base it presents numerous and robust aerial roots forming a sort of a cone of stilts which serves as support.

The extremities of the branches end in a tuft of amplexicaul (with the base surrounding the stem) leaves, imbricate, spirally placed, linear with pointed apex, coriaceous, of intense green colour, up to about 3 m long, provided with red thorns at the margins and in the central nervation.

The inflorescences are terminal, and as previously said, unisexual, surrounded by bracts, the male ones paniculate, the female ones conical with many tens of tiny flowers; after the flowering the branch usually parts in three.

The fruit is a syncarp (aggregation of fruits grown together and merged) almost spherical, of about 30 cm of diameter, formed by 70-80 woody obconical drupes, angled due to the reciprocal pressure, about 15 cm long, orange yellow in the lower part, for about 2/3, brown grey in the terminal one.

In the wild, the fruits are ingested by the animals that provide for the dispersion of the seeds, together with the one done by the water streams. It reproduces by seed which germinates in 2-3 months at the temperature of 24-26 °C.

Imposing species and of great ornamental effect, almost unknown outside the zone of origin, where however its population has drastically reduced during the last years due to the excessive anthropization, so much to be inserted, as “vulnerable”, into the red list of the IUCN (International Union for the Conservation of Nature).

It can be exclusively cultivated in the humid tropical and subtropical climate zones on soils permanently humid, in full sun, but in the initial growing stage when a slight shade is preferable.