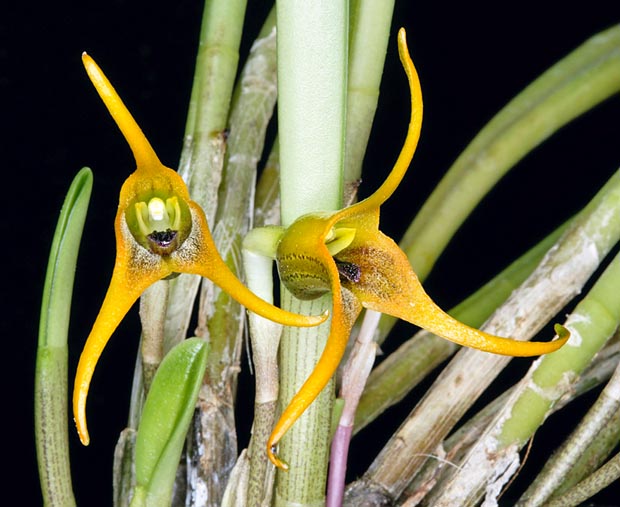 The species is native to Peru, where it grows in the humid forests at medium altitudes.

The genus is honoured to the Spanish physician and botanist Jose Masdevall (†1801) the name of the species is the Latin term “rigens” = rigid, with reference to the leaves and the parts of the flower.

The Masdevallia rigens Luer (1979) is a caespitose epiphytic species with creeping rhizome and erect stems, 5-6 cm long, covered by membranous sheaths, with at the apex a coriaceous, rigid, arcuate, linear, leaf, 15-20 cm long and about 1,5 cm broad.

Erect inflorescence on a short peduncle, from a lower node of the stem, carrying one single flower with rigid, oblong, sepals of about 3,6 cm of length, of ochre yellow colour slightly spotted of red, united at the base for about 1 cm of length to form a sort of tube and thinned and curved at the apices; the petals are oblong of pale green colour with a median red venation, 7 mm long and 2 mm broad, the labellum is obovate, cream white spotted of red, 8 mm long and 4 mm broad, warty at the apex. It reproduces by seed, in vitro, and by division.

Species with ornamental flowers of medium duration, about two weeks, but which, unluckily, emit a rather unpleasant smell, it requires a slightly shaded position, medium temperatures with winter night lows around the 10-12 °C and high atmospheric humidity, 70-80%, a good ventilation is essential as it is subject to rottenness when in presence of stagnating humidity.

The waterings must be frequent during the vegetative period, to be done in the morning, in way to give time to the plant to dry up, utilizing rain water, or by reverse osmosis or demineralised, reduced in winter; the fertilizations, during the vegetative period, are to be done with hydro-soluble balanced products, with microelements, at 1/4 or less, of the dosage suggested on the package, distributed and alternated in way to avoid salts accumulation at the roots.

It can be mounted on bark or on cork raft or cultivated in pot with draining and aerated compost, being the roots sensitive to the humidity stagnations, and it can be formed by medium sliced bark fragments and charcoal, possibly with a superficial layer of sphagnum if it is not possible to keep in the ambient a high humidity.