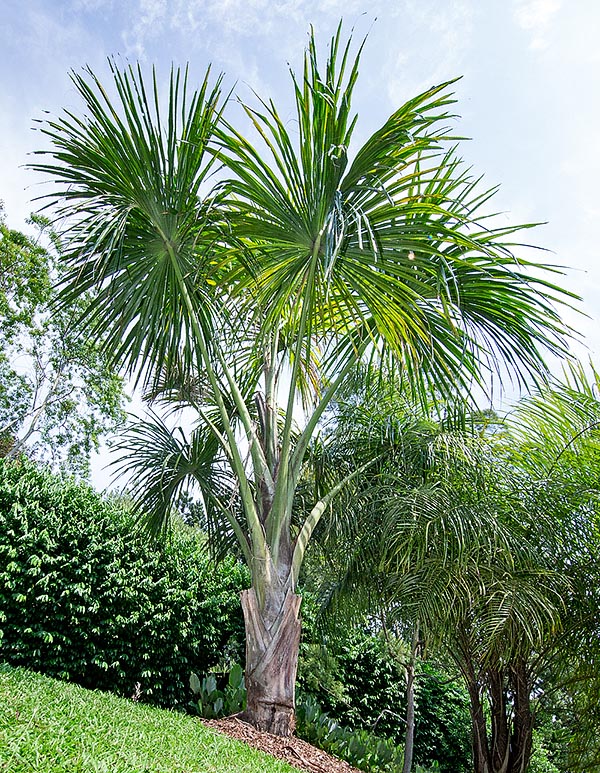 The Mauritia carana grows in often flooded zones along the water streams of Brazil, Colombia, Peru and Venezuela. Dioecious species with solitary stem; even 18 m tall with 30-40 cm of diameter © G. Mazza

The species is native to Brazil (Amazonas), Colombia (Amazonas, Guainía and Guaviare), Peru (Loreto) and Venezuela (Amazonas) where it grows in the pluvial forests and in the savannahs, mainly along the banks of water streams on soils periodically flooded foormed by white sands, at low altitudes.

The genus was honoured to the governor of the Dutch West India Company in Brazil Johan Mauritz van Nassau-Siegen (1604-1679); the name of the species comes from the local one, “caraná” with which it is called in Brazil, Colombia and Venezuela.

The Mauritia carana Wallace (1853) is a dioecious species with solitary stem, erect, up to about 18 m tall and of 30-40 cm of diameter, smooth and of pale grey colour in the oldest parts not covered by the bases of the dead leaves. The leaves, on an about 2 m long petiole, are costapalmate, about 2 m long and 3-3,5 m broad subdivided in 140-120 segments arranged in different angles; the base of the petiole has on the margins long hanging fibres. Semi-drooping woody inflorescences between the leaves, about 1,5 m long, ramified of the second order, with 16-18 distichous ramifications, up to 70 cm long, and flowers arranged in couple in the male individuals, solitary in the female ones. Subglobose fruits, of 5-7 cm of diameter, covered by reddish brown overlapped scales, containing only one globose seed.

It propagates by seed, previously kept in water for two days, in sandy loam maintained constantly humid at 26-28 °C, with quite variable germination times, from 1 to 5 months. Species of great ornamental value that would deserve a greater diffusion in the humid tropical climate zones and marginally subtropical, as isolated specimen or in group, in parks and large gardens. It requires an exposition in full sun or slightly shady, in particular during the juvenile phase, high and constant temperatures and ambient humidity and is not particular about the soil, even if it prefers the sandy ones, as long as maintained constantly humid. It can be utilized also in the tropical zones with seasonal climate having care of making frequent and regular waterings during the dry periods. The leaves, because of their resistance and durability, are employed as cover of the dwellings and the stems as supporting elements; the fruits are at times consumed by the local populations, even if not too much palatable, and the seeds utilized for realizing handicrafts.