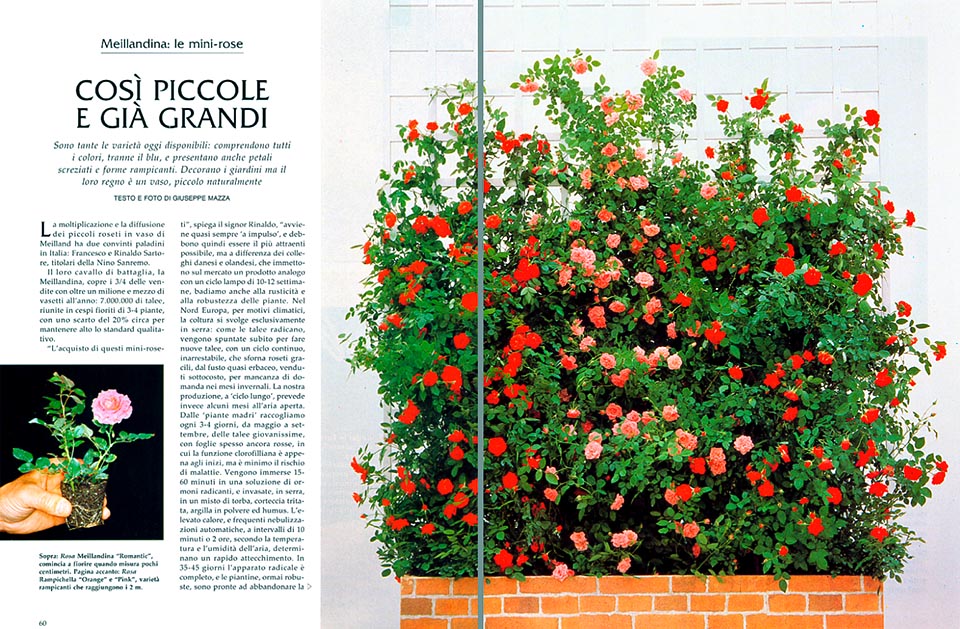 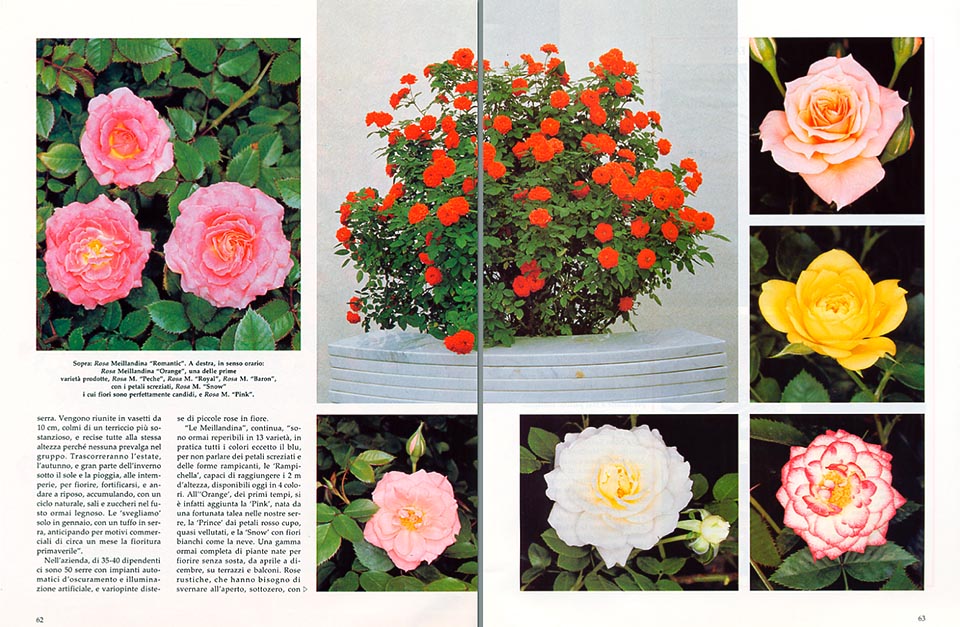 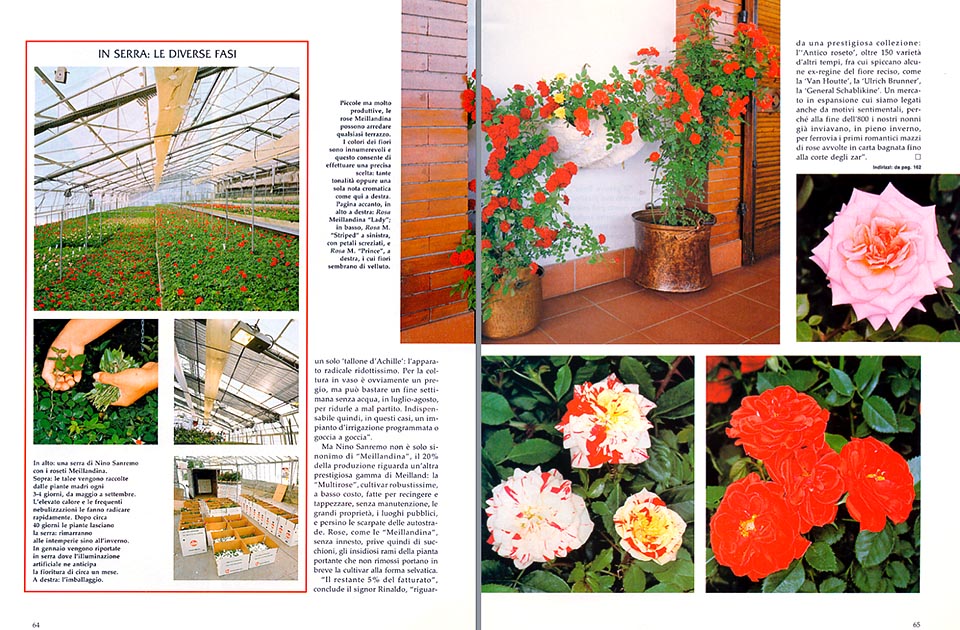 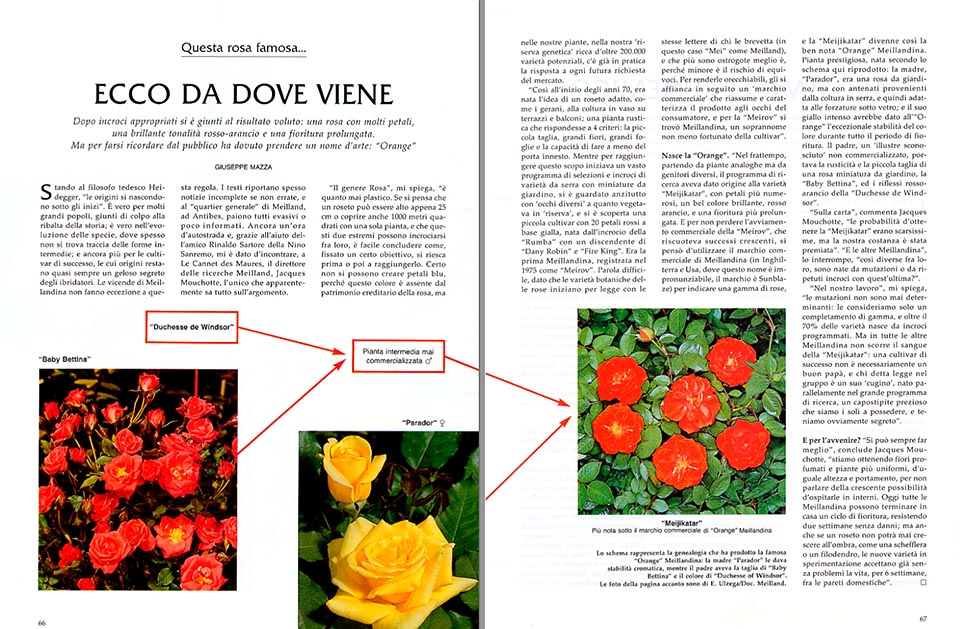 After the German philosopher Heidegger, “the origins hide under the beginnings”.

This is true for many populations, arrived at the front-stage of the history; it is true in the evolution of the species, where often we do not find any traces of intermediate forms; and even more for the successful cultivars, the origins of which remain almost always a jealous secret of the hybridizers.

The vicissitudes of the Meillandina are not exceptions to this rule. The texts often write incomplete, if not wrong, informations, and at the “general quarters” of Meilland, in Antibes, they all look evasive or little informed. One more hour of motorway, and thanks to the help of the friend Rinaldo Sartore of the Nino Sanremo, I can meet, at Le Cannet des Maures, the director of the researches Meilland, Jacques Mouchotte, the only one who, apparently, knows everything about the matter.

The genus Rosa, he explains to me, is very plastic. If we think that a rosary can be only 25 cm tall, or can cover even 1.000 square metres, with only one plant, and that these two extremes can cross each other, it is easy to conclude how, fixed a certain goal, we succeed, sooner or later, to reach it. By sure, we cannot create blue petals, because this colour is absent from the genetic patrimony of the rose, but in our plants, in our “genetic reserve”, rich of more than 200.000 potential varieties, there is practically the answer to every future requirement of the market.

So, at the beginning of the seventies, the idea was born, of a rosary suitable, like geraniums, to the cultivation in pot in terraces and balconies; a rustic plant which would respond to four criteria: small size, big flowers, big leaves and the capacity of not needing the graft carrier.

While, for reaching this aim, a vast programme was starting of selections and cross breeding of greenhouse varieties with garden miniatures, we have, in the mean time, looked with “different eyes”, to what was living in “reserve”, and we have discovered a small cultivar, with 20 red petals with a yellow base, born from the cross breeding of the ‘Rumba’ with a descendant of ‘Dany Robin’ and ‘Fire King’.

That was the first Meillandina, registered in 1975, as Meirov.

Difficult wording, as the botanical varieties of the roses begin, by law, with the same letters of he who patents them (in this case, “Mei”, like Meilland), and that, the more difficult, the better it is, because lesser is the risk of misunderstandings. To render them catchy, we place then, close to them, a “commercial trademark”, which summarizes and characterizes the product to the eyes of the customer, and for the Meirov, we found Meillandina, a nickname not less fortunate than the cultivar.

In the mean time, starting from analogue plants, but from different parents, the research programme had originated the variety Meijikatar, with more numerous petals, a nice bright colour, red orange, and more lasting flowering.

And, in order not to lose the commercial good start of the Meirov, which was meeting growing successes, they thought to utilize the commercial trademark of Meillandina (in UK and USA, where this name is unpronounceable, the mark is ‘Sun Blaze’), for indicating a range of roses, and the Meijikatar became, in this way, the well known ‘Orange Meillandina’.

The mother, ‘Parador’, was a garden rose, but with ancestors coming from the greenhouse cultivation, and, consequently, fit for the strains under glass, and the intense yellow, would have given the Orange the exceptional stability of colour during all the period of flowering.

The father, an “illustrious unknown”, not commercialized, had the rusticity and the small size of a miniature garden rose, the ‘Baby Bettina’, and the red-orange reflections of the ‘Duchesse de Windsor’.

Theoretically, Jacques Mouchotte comments, the chances of getting the Meijikatar, were very poor, but our perseverance was rewarded.

And the other Meillandinas, I interrupt him, so much different between them, were born from mutations or reiterated cross breeding with this last one?

In our work, he explains me, mutations are never determinant: we consider them a complement of range, and over the 70% of the varieties comes out from programmed cross breeding.

But in all other Meillandinas does not circulate the blood of the Meijikatar, a successful cultivar is not necessarily a good father, and the one predominant in the group is a “cousin”, born in parallel way in the huge research programme, a precious founder of a family, which we are the only ones to hold, ans which we keep, obviously, secret.

And for the future?, I ask.

We can do always better. We are getting perfumed flowers and more uniform leaves, of same height and aspect, not to talk about the possibility to keep them indoor. Nowadays, all Meillandinas can complete inside a house their flowering cycle, resisting two weeks, without damages; but even if a rosary will never be able to grow up in the shade, like a Schefflera or a Philodendron, the new varieties under experimentations, accept already, without any problem, the life, for six weeks, between the domestic walls.

Meillandina roses: born for cultivation in pots was last modified: May 24th, 2019 by Giuseppe Mazza