Melitaea athalia, much diffused in Europe, is identified by the lower page of the wings © Giuseppe Mazza

The Heath fritillary (Melitaea athalia Rottemburg 1775), belongs to the order of the Lepidoptera and to the family of the Nymphalidae.

As already said, in this family are usually included more than 6.000 species distributed all over the world, and therefore it is deemed to be the most consistent among those grouping the diurnal lepidopterans.

It is a common butterfly, widely diffused and rather variable in the pattern. It is notoriously difficult to identify the heath fritillary on the field, especially in the European area where live together many similar species having themselves variations in the identifying characters.

The etymology of the scientific name of the Melitaea athalia is, like all the denominations given by the first naturalists, subject to various interpretations, in particular the genus Melitaea (vdr. Melitaea cinxia). The synonym Mellicta (Billberg, 1820) comes from the combination of the Greek terms “meli” = honey and “liktés” = who licks, referred to the habits of these butterflies.

Also for what concerns the name given to this species there are no particular reasons that may justify or explain the reason for which the author has chosen such reference. Moreover like in this instance when the nominated character, due to his historical/political characteristics, would not by sure deserve the honour to be dedicated such a so much lovely living being like a butterfly.

Athaliah was the daughter of the King Ahab and of the Queen Jezebel of Israel. Married to Jehoram, become later on King of Israel, sealed a treaty between her people and that of the Kingdom of the North. Jehoram, direct descendant of King David actively promoted in his kingdom the worship of the Hebrew god Yahweh, but in the meantime tolerated the presence of the pagan god Baal worshipped by his wife Athaliah. After Jehoram’s demise, the son Ahaziah became the King of the Kingdom of the North, under the direct control of the Queen Mother Athaliah. During the subsequent periods the struggles between the two kingdoms strongly increased with assassinations and eliminations of the potential heirs and after long and alternate vicissitudes, Athaliah herself and her offspring succumbed along with their attempt to establish the worship of the god Baal as the prevailing religion.

Another much more simple and linear explanation is that the author Rottemburg thought initially to use for this butterfly the name Thalia, one of the three Graces, following the traces of other naturalists who had already given the name of other Graces to some fritillaries (Argynnis aglaja and Boloria euphrosyne) but finding this reference already assigned by Linnaeus to a butterfly of the genus Heliconia , simply added one letter to the name chosen by him transforming it in Athalia.

The common European names mainly identify some characteristics of this butterfly. In English, Heath fritillary; in French, Damier Athale; in German Wachtelweizen-Scheckenfalter; in Dutch, Bosparelmoervlinder. 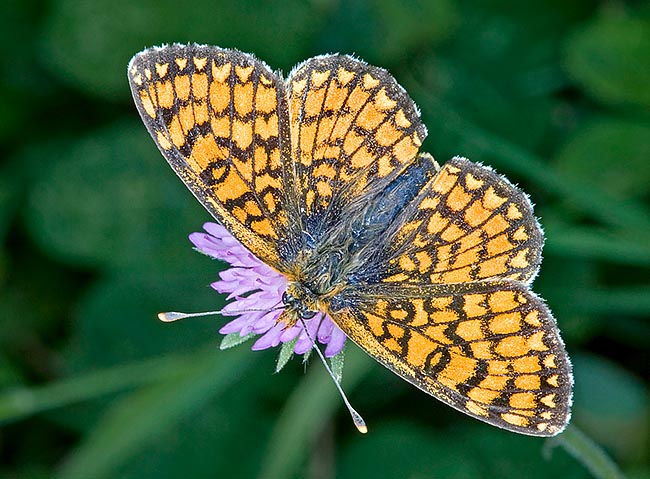 The Melitaea athalia is widely present in Europe, excepting, in the southern part, the Mediterranean islands, the southern Iberian Peninsula and southern Greece, and in the northern part, the areas facing the North Sea and the Baltic Sea. It is also found in all Asia in the temperate belt going from Turkey and Middle East up to Japan. In England, where it has practically extinguished in the few areas once inhabited, are under way vast reintroduction programmes. It is a highly protected species in UK and in Germany whilst in the other European areas, where it is much diffused and frequent, it does not need any protection. It equally frequents dry or humid grasslands, mountain or plain clearings, treed areas or humid meadows, from the sea level up to more than 2500 m of altitude. In the cool areas loves a lot the borders of the copses so much that in England has deserved the nickname of Woodman’s follower.

The Melitaea athalia is a medium-sized butterfly, easy to be confused with all the fritillary congeners present in the same area. As a matter of fact, it overlaps many other species and as sad before, it can be distinguished from the congeners only by very close distance and possibly by analyzing the lower page of the wings.

It has a wingspan of about 4-5 cm with a slight dimorphism for the female who results slightly bigger, with more massive body and a less pronounced colour. The upper page of the wings shows characteristics common to several fritillaries, especially the Melitaea diamina and the Melitaea phoebe, also subject to frequent variations and with which it is often mistaken. It has brown/orange colouration with dark patterns that crossing form small square areas more or less vast, lined vertically on more lines starting from the margin of the wing. Furthermore, it presents a very dark area at the base of both wings, characteristic not so much accentuated as in the Melitaea diamina. Conversely, more constant are the characteristics of the drawings on the lower page, particularly on the hind wings where are easily identified some characteristics that keep practically unchanged in all the specimens. 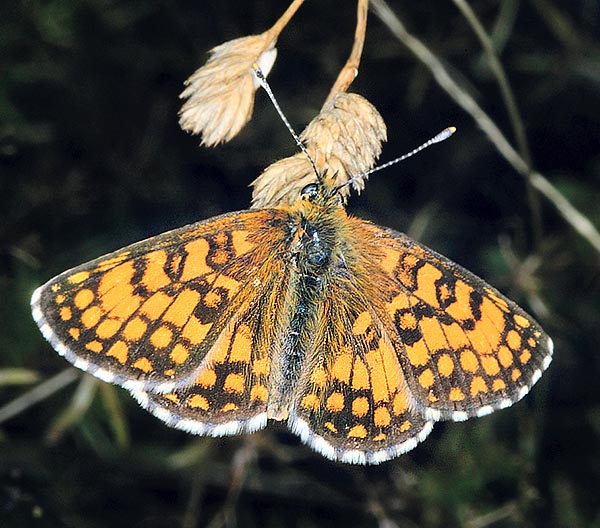 The series of yellowish crescents surrounding the border of the hind wing, delimited by a thin but well defined black line and the ample, well defined, white spots at the base of the wing. Well developed and robust brown antennae, with flat and yellowish vertex.

Like all fritillaries, it flies in the warmest periods of the year, starting from May up to early October.

It is an easy to sight butterfly as it spends long time flying going from flower to flower, with fast wing beats spaced by short glides. It is also easy to approach and to observe when stopped while feeding.

As usually done by the fritillaries, also this butterfly lays a high number of eggs and consequently each generation sees a remarkable quantity of specimens in even restricted areas.

It is a butterfly living in much concentrated colonies and keeping stably the occupied area often without colonizing the nearby ones, and for this reason we may find points of concentration and other nearby ones where it results inexplicably absent.

The eggs are usually laid on the host plants but at times also on close essences and have a hatching time of about three weeks. Upon their birth, the caterpillars keep in community in a small silky nest that will be abandoned after about 15 days for dispersing and completing the growth.

The last generation spends the winter in the stage of small larva, usually alone. The adult caterpillar is about 2,5 cm long, is black with small yellowish protuberances placed on various parallel lines along the whole body and covered by small rosettes of blackish hairs. The pupa has an incubation time of about 20 days. All fritillaries in this stage are subject to a very high predation done by small animals and insects.