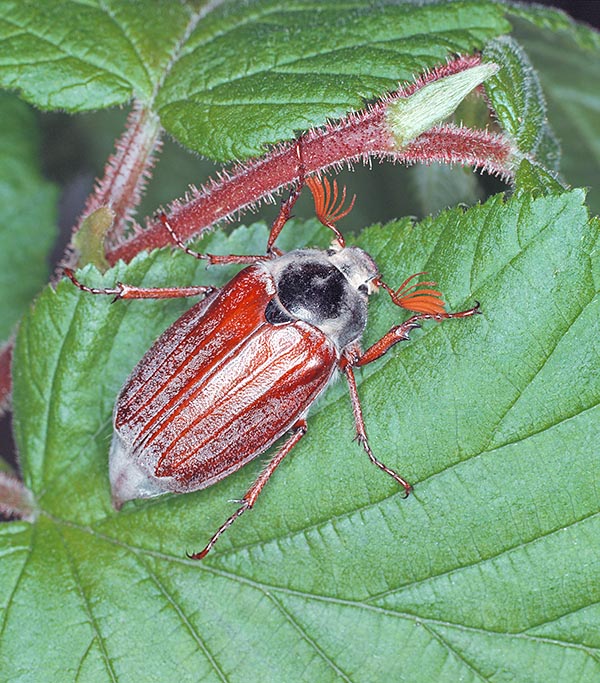 Melolontha melolontha, present in all Europe, has been for years a plague for agriculture. The larvae eat in fact vegetables roots like potatoes and the adults the leaves of trees and shrubs © Giuseppe Mazza

The May bug (Melolontha melolontha Linneaus 1758); from the old Greek “melolanthé” that is scrabble, is a coleopteran belonging to the family of the Scarabaeidae.

This family, as mentioned in the text of the [Coleoptera, includes more than 20.000 species diffused all over the world.

The common Italian name “maggiolino” is due to the fact the usually the adults flicker during the month of May. In England, it is called cockchafer (or May bug), in Germany, Feldmaikäfer and in France Hanneton commun.

The species is present in all Europe; its populations, until the fifties of the 20th century, were very abundant in all Europe (in many cases they were real and true pests, especially in the farming areas), after this they drastically decreased due to the use of the pesticides as they spoiled, until the destruction, the cultivations.

Nowadays, thanks to the limited use of pesticides for favouring the organic agriculture, its populations are slowly growing again.

Four European species belong to the genus Melolontha, present in all Europe : Melolontha hippocastani Fabricius (1801), Melolontha pectoralis Megerle von Mühl- feld (1812) and Melolontha sardiniensis Drumont, Muret, Hager & Penner (1999). This last one, discovered and described by Drumont in 1999, is present only and exclusively in Sardinia (in fact, it is an endemism).

It is a phytophagous species (that means it nourishes of plants), in particular of herbaceous plants (annual and perennial) but also of shrubby species. The larva eats roots (of potatoes, for instance) whilst the adult eats leaves (broad leaf trees, usually).

The adult can reach the length of 30 mm, with compact and robust body; the elytra, with pronounced longitudinal stripes, are brown/reddish with some whitish down, whilst the pronotum is black, accompanied by thick hairiness. 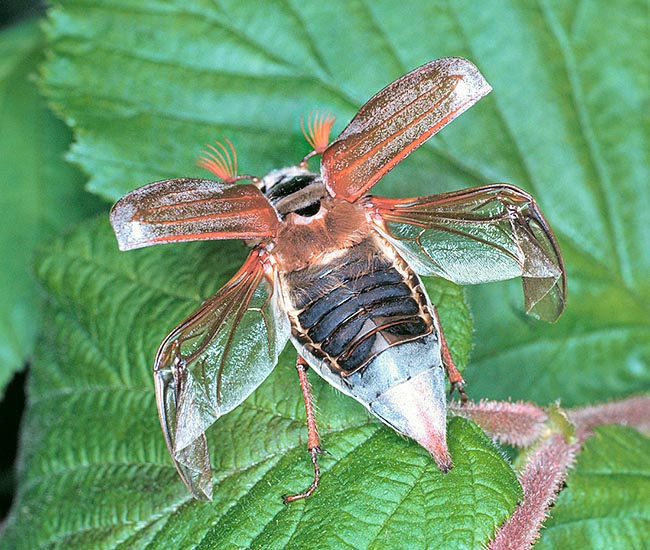 The compact and robust adult reaches the 3 cm of length. The elytra, here raised while spreads the wings, show marked longitudinal striae with sporadic whitish down. The pronotum is black accompanied to thick hairiness © Giuseppe Mazza

The ventral region is black (especially the abdominal segments which turn white only close to the elytra), whilst the region of the prosternum (the equivalent of the pronotum in ventral position) is occupied by a thick whitish hairiness.

It is present, even if not very evident as is the case of the European rhinoceros beetle (Oryctes nasicornis), a sexual dimorphism: all males have 7 antennomores (the female has only 6) and are longer than the female’s. Males and females of the May bug are, therefore, quite similar.

The larva can reach the length of 50 mm; has tender and light body. It is of melolonthoid type. This term, taken from the scientific name of this species, is used for indicating all those larvae of other species, belonging to the family of the Scarabaeidae, which are curved in a C.

Only the head and the mandibles are sclerified: the mandibles, in particular, allow the larva to dig tunnels and to nourish of roots. Present are, also, 3 couples of legs.

The larva develops underground close to roots it eats. It can live up to 4 years (the winter is passed by digging up to 100 cm of depth). Between late April and the whole month of May it goes up towards the surface of the soil where it passes to the stage of pupa, that is creates a cocoon inside which it metamorphosizes (modifies) in adult. This phase may require up to 6 weeks (the duration is mainly influenced by the outer temperature and the humidity).

The adult can live up to 7-8 weeks; as in the case of the Rhinoceros beetle, this phase is used mainly for the reproduction. The only difference is that, in this case, also the adult (besides the larva) nourishes in particular of leaves (herbaceous and shrubby, also of trees). One female may lay, in proximity of herbaceous and/or shrubby roots, up to 80 eggs for various times. 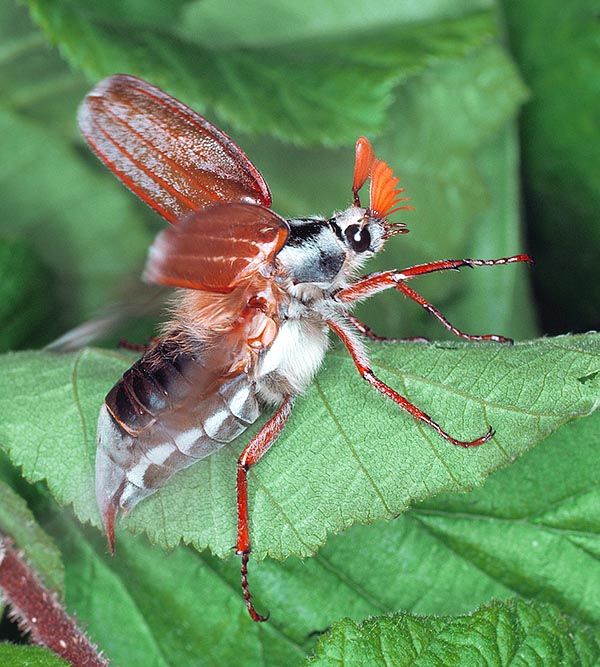 There is a slight sexual dimorphism in the antennae. In fact the males show 7 antennomores or lamellae, females only 6. The larvae spend about 4 years underground. The adults live 7-8 weeks © Giuseppe Mazza

This insect, as aforementioned, has been in fairly recent times but especially in historical times a real and true problem for the agriculture, often and willingly as a pest, also because the modern pesticides did not exist.

In the Middle Ages, around the 1320, the court of Avignon sentenced the coleopteran as outlaw and to leave the country within a few days… it is even said that it had been excommunicated. To be fair, nowadays we are not so much different seen that in Memphis, Tennessee, there is a law forbidding the frogs to croak after 2300 hrs.!

During the industrial revolution, but also before, as a strategy of biological struggle, the coleopteran was consumed roasted or in soup, especially in France and in Germany.

After that, the introduction of the modern pesticides has by sure contributed to drastically reduce the presence of this weed in the cultivated fields, but, later on, the pesticides have proved harmful (and in some instances, useless because they killed the insects “useful” to the biological struggle) for the health of man since they were absorbed from the plant and/or from the cultivated fruits.

Presently, they try to limit the presence of this coleopteran in the cultivated fields by means of the biological control through the use of parasites (bacteria, fungi and nematodes, very small flat parasitic worms) who, parasitizing the inner part of the larva, limits its growth leading it, in some cases, to death.

Finally, this coleopteran has been a sort of a “toy” for many children, lived from the old Greece, passing through the Victorian age up to the sixties/seventies of the last century. The children tied a thread to one of the rear legs of the coleopteran and then left it free but holding the thread while the coleopteran flew trying to escape (a sort of a kite). The coleopteran during the flight, held by the thread, “drew” true and real spirals, which have inspired Aristophanes to write, in a verse of his comedy “The clouds”, that ‘the fantasy is similar to the melolanthé the child flies attached to a thread”.