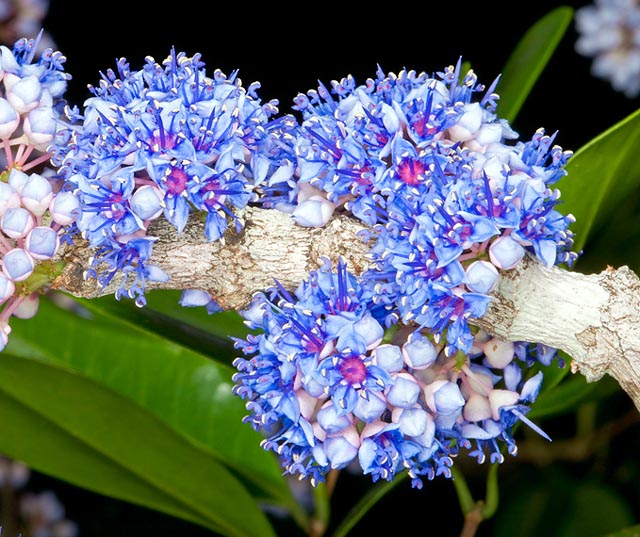 This plant is native to India, where it mainly lives in the dry evergreen and semi-deciduous tropical forests along the western coasts, representing, in some zones, the predominant arboreal species.

The name of the genus is the one assigned by Dioscorides (ca. 40 – ca. 90), to the Arbutus unedo; the name of the species comes from the Latin “umbella” = umbrella, with reference to the umbel arranged flowers.

The Memecylon umbellatum Burm. f. (1768) is a shrub or a small, evergreen, tree up to about 14 m tall, but which normally does not exceed the 4 m, much ramified, with the youngest branches with ashy-grey bark.

The leaves, on a short petiole, are opposite, elliptic or ovate with entire margin, 3-7 cm long and 2-3 cm broad, of glossy dark green colour on the upper page, paler below.

The flowers, grouped in great quantity in axillar umbels, close together and compact, appear in the lower part of the branches having no leaves; they are sessile, globular when still closed, star-shaped when open, of about 1 cm of diameter, with four purple blue petals and stamina which are longer than the petals. The fruit is a globose drupe with thin and coriaceous skin of 0,6-1 cm of diameter, initially green, then tending to the red and finally to the blackish when ripe.

It usually and easily reproduces by seed, as the vegetative propagation is rather difficult. Although the species is widespread in nature and is much appreciated by the local populations, it is relatively little known outside its natural ambient, therefore there are no sufficient information about its cultivation exigencies, apart those coming from the climatic conditions of its origin countries, tropical with a well-defined dry season. The pulp of the fruits is edible and was consumed in the past during famine periods. The wood, very hard and dense, is utilized in building dwellings and boats, as well as fuel and for producing coal; dyes employed in the textile factories are extracted from its leaves and flowers.

Fruits, leaves and roots are utilized since remote times in the traditional medicine for various pathologies; lab studies have indicated promising hypoglycaemic and antimicrobial properties in the extract of the leaves and analgesic properties in those of the roots. We should not underestimate its potentiality as ornamental plant due to the odd and showy blooming which, almost entirely, covers the branches in the part bearing no leaves.