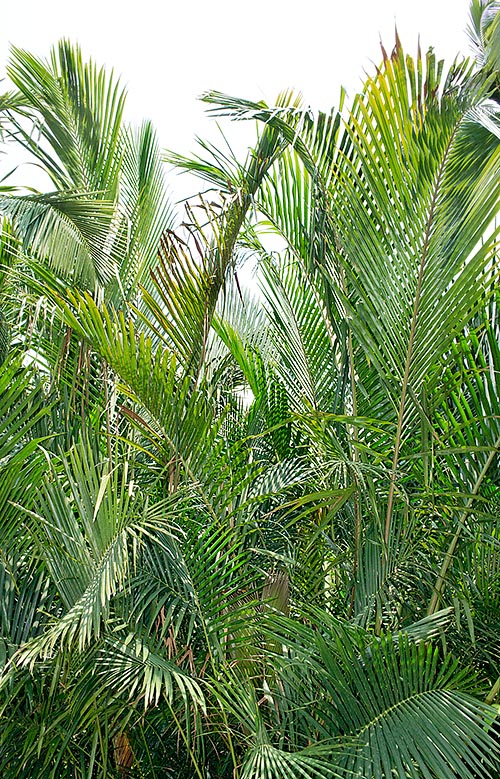 Metroxylon sagu is a cespitous species frequent in the Molucca Islands and New Guinea swamps. After blooming the main stem, that can reach 15 m of height, dies but the plant keeps alive through the stems born at the base, one of which usually prevails, with very fast growth and about 10-12 years vital cycle © Giuseppe Mazza

The species is native to the Molucca Islands and New Guinea where it grows in swampy humid areas on clayey soils, at times representing the dominant species, from the sea level up to about 700 m of altitude.

The name of the genus is the combination of the Greek substantives “μήτρα” (metra) = uterus, womb and “ξύλον” (xylon) = wood, with reference to the starch contained in the stem called by the natives “sagu”, hence the specific name.

The Metroxylon sagu Rottb. (1783) is a monocarpic species (the stem dies after having brought the fruits to maturity), monoecious, cespitous, rather variable, with 6-15 m tall stem and diameter of 35-60 cm covered by the decaying foliar bases, but in the oldest part where are visible the spaced rings trace of the junction of the fallen leaves; the growth is fairly rapid, up to 1,5 m/year in the best cultivation conditions.

When the aquifer is close to the surface, it develops short pneumatophorous roots (roots that emerge from the soil provided of aeriferous tissue (aerenchyma) allowing the flux of oxygen to the submerged organs).

The pennate leaves are up to 6 m long, ascending, with linear pinnules with pointed apex, up to 1,5 m long and 10 cm broad, inserted on the rachis to form a V, of dark green colour; the base of the leaf, petiole and rachis can be unarmed or equipped with more or less long thin spines. Terminal inflorescence, ramified, up to about 7 m long, with male as well as hermaphroditic flowers (polygamous inflorescence) in pair; once the ripening of the fruits is completed the stem dies, but the plant continues to live through the stems born at the base, of which one usually prevails on the others; the vital cycle, from the birth to the fructification, lasts about 10-12 years. The fruits are globose, of 4-5 cm of diametre, covered by rhomboidal imbricate scales of pale brown colour, containing one seed only.

It reproduces by seed, with quite long germination times, but more frequently through the young plants forming at the base of the stem.
Since remote times and until the first decades of the XX century, the species has been the main food source of the local populations of a vast area of south-eastern Asia due to the fecula derived from the stem, averagely 200 kg, floury substance of the same nature as the starch, and still now utilized, even if in lesser quantity, prepared and cooked in various manners, whilst its use in the animal alimentation has increased. The stem is cut by the beginning of the blooming, when the contents of starch is maximum, being accumulated by the plant, mainly in the upper part of the stem, as reserve for producing at the end of the vital cycle the huge inflorescence and the fruits. 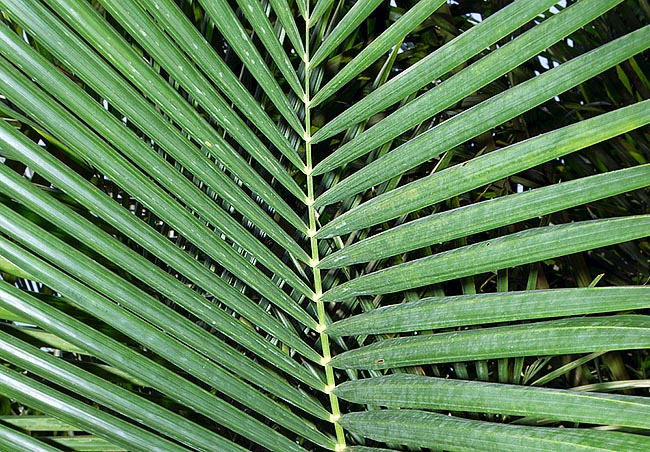 From the trunk, cut just before the blooming, they get about 200 kg of edible fecula and the young sprouts are used as vegetable. The very decorative leaves pinnules detach in a " V " from the rachis © Giuseppe Mazza

It is a species with typical tropical requirements with medium high temperatures, lowest ones not under the 18 °C, and humidity over the 70%; requires exposition in full sun or slight shade and soils preferably clayey and acidic with great availability of water, even swampy, where other cultivations would not be possible.

The palm has also other uses, the leaves are utilized for covering rural dwellings, being long-lasting, and for realizing various handicrafts (headgears, bags, mats, etc.) the young sprouts are locally utilized as vegetable and the larvae of the coleopterans Rhynchophorus schach Olivier and Rhynchophorus ferrugineus Olivier in case present on the stems, at times expressly left on the field after the cutting for the fecula extraction, are highly appreciated, raw as well as cooked, but represent also the main threat for this species as they attack also healthy and growing plants, the females of these coleopterans, in fact, lay their eggs in the stem and the larvae nourish of the inner tissues up to the vegetative apex, resulting in the death of the plant. Finally, we have not to underestimate the possibility of use in the parks and vast gardens in the humid tropical regions due to its ornamental characteristics and growing speed.