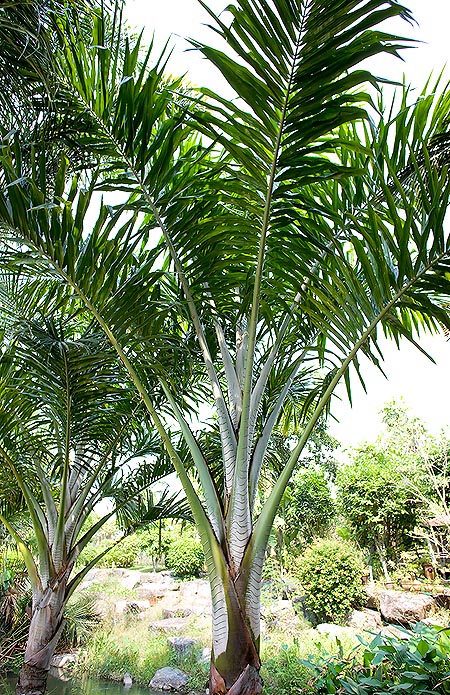 The Metroxylon salomonense has a 20 m stem with 11 m leaves © G. Mazza

The plant is native to south-western Pacific (Bismarck Archipelago, eastern New Guinea, Santa Cruz Islands, Solomon Islands and Vanuatu), where it grows in swampy zones and in the pluvial forests up to about 700 m of altitude.

The name of the genus is the combination of the Greek words “metra” = uterus, womb, and “xylon” = wood, with reference to the starch (sago) contained in its stem; the Latin name of the species indicates one of its origin places: the Solomon Islands.

The Metroxylon salomonense (Warb.) Becc. (1914) is a monocarpic plant (bearing fruit only one time during its existence), monoecious, with an imposing solitary stem, up to 20 m tall with a diameter of about 1,2 m, of brown grey colour, covered bye the foliar bases but the oldest part where are visible the spaced rings trace of the junction of the fallen leaves.

The leaves are pinnate, even 11 m long, initially erect, then arcuate, persistent and hanging along the stem after having dried up, with dark green pinnulae, long even more than 1,5 m and 10-18 cm broad, pointed and with corrugated margins.

The petioles are robust, up to 40 cm broad; the foliar base, petiole and rachis have some oblique crests with flexible yellowish thorns long up to 40 cm.

The inflorescence is terminal ramified, 4 m tall, with a central axis from which depart various horizontal ramifications carrying the pendulous floriferous branches, with male flowers as well as hermaphrodite (polygamous inflorescence); after having completed the maturation of the fruits, as said before, the plant dies.

The fruits are globular, depressed at the apex and at the base, about 6 cm long and 9 broad, covered by imbricate scales, of yellowish green colour, containing one seed only. It reproduces by seed which germinates in 3-4 months with bottom heat; the growth is fast, as it takes 10-12 years for reaching the floriferous maturity. It is a towering palm tree and of very fast growth, cultivable in full sun in the tropical and marginally subtropical climate zones, in the warmest and most sheltered areas, with temperatures which should never be under the +10 °C, if not rarely and for a very short time; it is not particular about the soil provided it has a great availability of water.

The great leaves are utilized by the local populations as cover of the traditional dwellings; from the stems they get starch (sago), when the plant is close to the blossoming and its contents is maximum, consumed cooked in various forms, even if its use, frequent time ago, is now limited to some populations. The seeds are the main source of vegetal ivory utilized in the production of buttons and small handicraft objects.

Despite its ornamental characteristics, it is rarely employed for such purpose, considered the reduced duration and the imposing size it may reach, with the consequent disposal problems; outside the origin zones is cultivated only in botanical gardens and in great lovers’ collections.